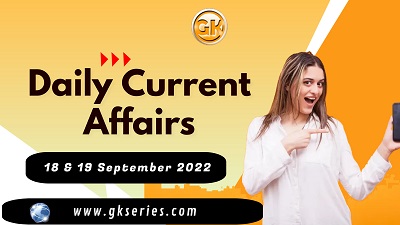 Current Affairs is the most important area in all competitive exams. But the difficulty level is very high. That’s why; many aspirants get confused, how to select Current Affairs for Preparation of Competitive Examination? In this Post, Daily Current Affairs 18 & 19 September 2022, we have tried to cover each and every point and also included all important facts from National/ International news that are useful for upcoming competitive examinations such as UPSC, SSC, Railway, State Govt. etc.

According to a press release, the Board of Directors of the Bank authorised the appointment of Mondal as the MD & CEO of the Bank on September 15, 2022, based on the consent granted by the Reserve Bank of India (RBI). He was the Deputy Managing Director of the bank since February 17, 2022, and was subsequently appointed as interim MD & CEO with effect from April 1, 2022. Prior to joining CSB Bank, Mondal was Executive Director and Head, of Retail Banking at Axis Bank.

At CSB Bank, Mondal has been working on expanding retail franchise distribution and branches, building technology platforms with a larger focus on digital initiatives towards automation and centralisation of processes. Mondol has around 30 years of banking experience across businesses and functions, including retail assets, retail liabilities, business banking products and technology.

Before Axis Bank, he was the senior group president and head of retail and business banking at Yes Bank, wherein he was instrumental in setting up the entire retail franchise in a short period of time. Prior to Yes Bank, he has worked at HDFC Bank, Standard Chartered Bank, Wipro InfoTech and Colgate Palmolive.

The book has been compiled by Bluekraft Digital Foundation and has a foreword by music composer and Rajya Sabha member Ilaiyaraaja. In 12 chapters dealing with domains as varied as infrastructure, education, socio-economic mobility, gender equality, self-reliance and many more. The book not only presents Ambedkar’s vision of India but also takes into account several achievements of Modi and his government.

Dr B.R. Ambedkar’s influence has an overarching impact on the making of Modern India. However, his legacy was sidelined and subjected to institutional neglect. The book is a prism that reflects upon the multitude of contributions of Dr Babasaheb Ambedkar in the nation-building process. Many of his ideas and interventions continue to define our governance paradigm, especially with PM Narendra Modi at the helm ensuring that his legacy is revived. The book studies the points of intersection of India’s development story under Prime Minister Narendra Modi and the ideals of Babasaheb. It also highlights the striking parallels between the two towering personalities that succeeded against all odds and worked to dismantle stifling social structures that they themselves experienced from close quarters.

World Bamboo Day 2022: World Bamboo Day is observed every year on September 18, in order to create public awareness about bamboo and its various uses. Bamboo is a natural resource that has to be used sustainably for a variety of global business needs. In places like Southeast Asia, East Asia, and South Asia, the use of bamboo is extremely important. Conceptualised by the World Bamboo Organisation (WBO), this day also promotes the bamboo industry by highlighting its concerns. Bamboo wood has long been used for various purposes in countries around the globe, especially in the east and southeast Asia. Bamboo grows on its and doesn’t require to be replanted, making it easily available.

By observing World Bamboo Day, WBO aims to sensitise people about the potential uses of bamboo. Promoting the new cultivation of bamboo in developing regions across the world can yield tremendous economic development. In fact, bamboo can be used as a substitute for numerous unsustainable resources. Found in South-East Asia, bamboo can be used in various ways including as food, and as a substitute for wood, building, and construction material.

WBD was officially declared by the World Bamboo Organization on September 18 at the 8th World Bamboo Congress held in Bangkok in 2009. The aim of the WBO is to bring the potential of bamboo to more elevated exposure, to promote new cultivation of bamboo for new industries in regions across the world, and also to promote traditional uses locally for community economic development, etc.

India To Be Home to Cheetahs After 70 Years

India To Be Home to Cheetahs After 70 Years : Eight African cheetahs are all set to move from Namibia into their new habitat at the Kuno National Park in Madhya Pradesh, on September 17, on Prime Minister Narendra Modi’s birthday.

The PM is expected to release the five female and three male cheetahs into the Park’s quarantine enclosures on Friday as part of his efforts to revitalise and diversify the country’s wildlife and habitat, his office has said. The last cheetah in India died in 1947 in the Korea district in present-day Chhattisgarh, which was an earlier part of Madhya Pradesh, and the species was declared extinct from India in 1952.

According to reports, the cheetah has lost 90 per cent of its global habitat in the last 100 years. In addition, in many of the 31 populations of the cheetah, only 100-200 are left with their habitat consistently deteriorating. The ‘African Cheetah Introduction Project in India‘ was conceived in 2009, with a plan to introduce the big cat by November last year in Kuno National Park, but it suffered a setback due to the COVID-19 pandemic.

Health Minister Mansukh Mandaviya urges people to take part in the blood donation drive and donate blood to save lives. The citizens can register themselves on Aarogya Setu App or e-Raktkosh portal to donate blood as part of the ‘Raktdaan Amrit Mahotsav’.

In states/UTs, 50 BLOs from nearby states of Rajasthan, Uttar Pradesh, and Delhi joined the event physically at India Habitat Centre in New Delhi. Over 350 BLOs joined the meeting via video-conferencing from the office of Chief Electoral Officers (CEO). The BLOs participated in the infective session with the Commission sharing their experience, challenges they came across while performing their duties, and success stories. It was first-of-its-kind direct interaction by the Commission with the BLOs across the country.

25­-year-­old climate activist Vanessa Nakate appointed as UNICEF Goodwill Ambassador : United Nations International Children’s Emergency Fund (UNICEF) appointed Vanessa Nakate, a 25­-year­-old climate activist from Uganda as the Goodwill Ambassador of the UN Children’s Fund (UNICEF). Her collaboration with the organisation and recognising her outstanding global advocacy for climate justice for current and future generations. Globally half the world’s 2.2 billion children live in one of the 33 countries, classified by UNICEF’s Children’s Climate Risk Index as “extremely high­risk” of the impacts of climate change. According to UNICEF, the top 10 countries are all in Africa.

The list is based on over one million survey responses across Asia and West Asia, representing the experience of over 4.7 million employees in the region. Federal Bank Limited is an Indian private sector bank headquartered in Aluva, Kochi. The bank has 1,272 branches spread across different states in India. It also has representative offices abroad in Abu Dhabi, Qatar, Kuwait, Oman, and Dubai.

The plan aims to focus on growing both its network and fleet, revamping its customer’s proposition, enhancing reliability and on-time performance, taking a leadership role in technology, sustainability, and innovation, and investing in the best talent in the airline industry. In the coming five years, Air India will strive to increase its market share to at least 30% in the domestic market.

It aims to grow significantly in the international routes from the present market share. The immediate focus of the airline is to fix the basics and readying itself for growth.

India Ratings Cuts FY23 GDP Growth Forecast to 6.9%: India Ratings became the latest agency to cut its FY23 gross domestic product forecast. The ratings agency cut the forecast to 6.9 per cent from 7 per cent, joining other institutions who have cut their projections to below 7 per cent since the release of the April-June quarter GDP data.

The agency did say that India’s biggest strength continues to be domestic economic activity, which has shown more resilience compared to the rest of the world. It said that it expects the growth momentum to sustain, averaging around mid-single digit in the remaining quarters, mainly buoyed by the upcoming festival season.