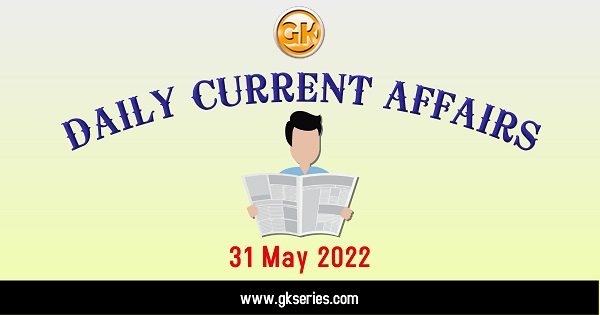 Current Affairs is the most important area in all competitive exams. But the difficulty level is very high. That’s why; many aspirants get confused, how to select Current Affairs for Preparation of Competitive Examination? In this Post, Daily Current Affairs 31 May 2022, we have tried to cover each and every point and also included all important facts from National/ International news that are useful for upcoming competitive examinations such as UPSC, SSC, Railway, State Govt. etc.

Current Affairs for Competitive Exam – 31 May 2022

Insurance Regulatory and Development Authority of India (Irdai) has formed various committees through the General Insurance Council (GIC) to suggest reforms in several areas of general, reinsurance and life insurance such as regulation, product, distribution, among others.

According to a GIC spokesman, these panels include leaders of private and public sector insurance companies, members of Irdai, and representatives from the GIC. Irdai established GIC to serve as a liaison between the insurance regulator and the non-life insurance business.

The Insurance Regulatory and Development Authority of India (IRDAI) is a regulatory agency that is responsible for regulating and licencing the insurance and reinsurance businesses in India. It is under the Ministry of Finance’s jurisdiction. It was established by the Insurance Regulatory and Development Authority Act, 1999, which was passed by the Indian Parliament. The agency’s headquarters have been in Hyderabad, Telangana, since 2001, when it relocated from Delhi.

The Indian Navy Ship (INS) Gomati was decommissioned on May 28 from the naval dockyard in Mumbai, informed the Ministry of Defence in an official release. The ship was paid off under the command of Captain Sudip Malik in a poignant ceremony. INS Gomati derives her name from the vibrant river Gomti and was commissioned on 16 April 1988 by then defence minister, KC Pant, at Mazagon Dock Limited (Mumbai). The third ship of the Godavari class guided-missile frigates, INS Gomati was also the oldest warrior of the western fleet when decommissioned.

INS Gomati participated in numerous operations including Cactus, Parakram and Rainbow, and several bilateral and multinational naval exercises.  IMS Gomati was twice awarded the coveted Unit Citation, in 2007-08 and again in 2019-20, for remarkable spirit and stellar contribution to national maritime security.

The ship’s legacy will be kept alive in an open-air museum being set up on the picturesque banks of the eponymous river Gomti in Lucknow where several of her combat systems will be displayed as military and war relics.

World No Tobacco Day observed on 31st May

World No Tobacco Day (WNTD) is observed around the world every year on 31 May. This yearly celebration informs the public on the dangers of using tobacco, the business practices of tobacco companies, what the World Health Organization (WHO) is doing to fight against the use of tobacco, and what people around the world can do to claim their right to health and healthy living and to protect future generations.

The theme for 2022 is Tobacco: Threat to our environment. The Day is an annual celebration that informs the public on the dangers of using tobacco, the business practices of tobacco companies, what the World Health Organization (WHO) is doing to fight tobacco use, and what people around the world can do to claim their right to health and healthy living.

Kuwait plans to start building the world’s largest petroleum research centre by the end of the year, the oil ministry said on Twitter on Wednesday. The Middle East Economic Digest said the project had stalled because of budget pressure, estimating its cost at $120 million.

The research centre will have 28 laboratories and built in al-Ahmadi, south of Kuwait City. The project will seek to develop improved production and refining techniques which can be used by the industry for different applications (include: extraction of heavy crude and non-associated gas). Kuwait is a country which is highly-dependent on oil revenue.

WHO honoured Jharkhand for efforts in controlling tobacco consumption

The World Health Organization (WHO) has selected Jharkhand for the World No Tobacco Day (WNTD) Award-2022 for recognising its efforts in controlling tobacco consumption.

The award will be received by the Stata Tobacco Control Cell of the Health Department on the occasion of World No Tobacco Day (31 May).

National Tobacco Control Programme (NTCP) was launched in Jharkhand in 2012 when the tobacco prevalence rate in the state was 51.1%.

For the first time in the country, The Department of Indian Posts has delivered mail using a drone as part of a pilot project in Gujarat’s Kutch district.

This attempt was done by the drone from Habay village in Bhuj taluka to Ner village in Bhachau taluka of Kutch district by the postal department under the guidance of the Union Ministry of Communications. It took 25 minutes to deliver the parcel to the destination located 46 km from the originating point.

Rajasthan becomes the first state to attempt systematize of health accounts to track and monitoring of health expenditures over time and can serve as an important tool for evidence based policy making.

This project of Rajasthan will be aid by the WHO India country office by providing technical and financial support for conducting the first round of health accounts. The state government has allocated more than 7% of the total budget for health.

Nine times Derby winner, legendary Lester Piggott has died aged 86. Piggott was partially deaf, has won the Derby at Epsom for the first time in 1954 and ninth win came on Teenoso in 1983.

Nawazuddin Siddiqui honoured with Excellence in Cinema at French Riviera

Nawazuddin Siddiqui has received the Excellence in Cinema award at the French Riviera Film Festival. He was received the honour from the two-time Emmy winner American actor-producer, Vincent De Paul.

The elevated ceremony will be held at the Vatican on August 27, 2022. These cardinals represent the Church worldwide, and reflect a wide variety of cultures, contexts and pastoral ministries.

Single-Pick Cotton Pilot Project will launch by the Telangana Govt

The Telangana Government will launch a pilot project on single-pick cotton on about 50,000 acres.

Currently, the farmers pick cotton bolls at least three to four times, this method will help the farmers to extend the harvest by a few weeks and allow farmers to complete the harvest all at once. Single-pick cotton: Cotton varieties that flower at one time and boll bursting happens at the same time.

The player of the match: Goalkeeper Thibaut Courtois (9 Saves), Real Madrid. The first UEFA Champions League was organized in 1955-56 when it was called the European Cup and in 1992-93, it became the champions League.