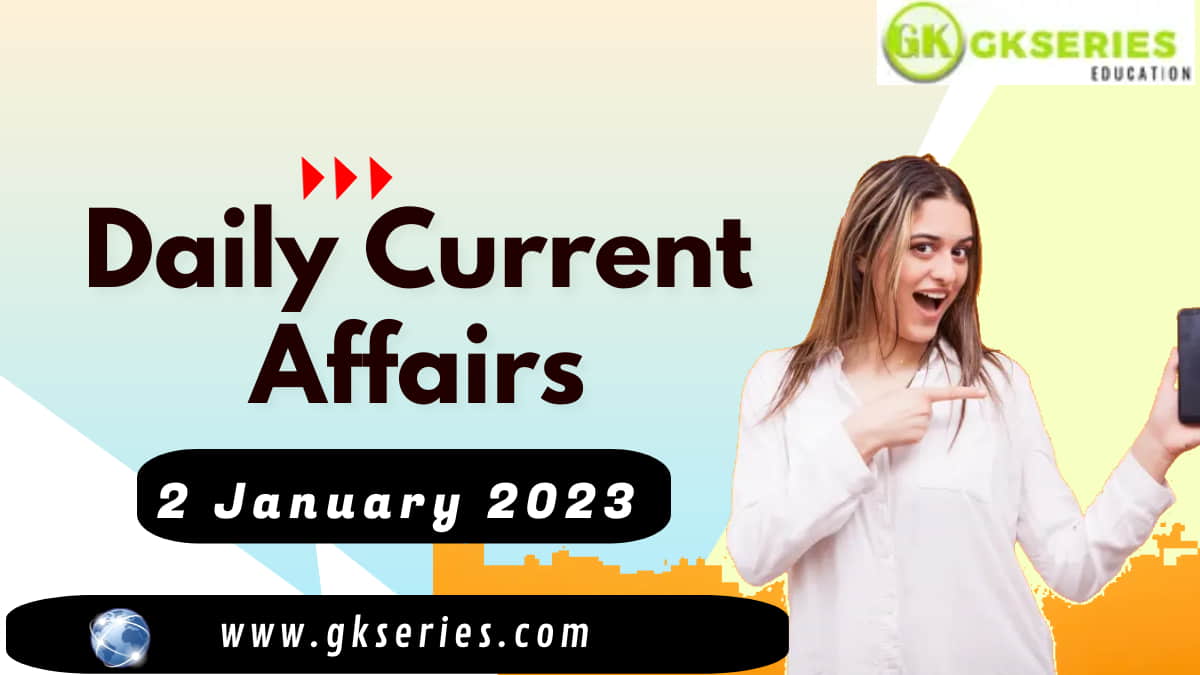 Current Affairs is the most important area in all competitive exams. But the difficulty level is very high. That’s why; many aspirants get confused, how to select Current Affairs for Preparation of Competitive Examination? In this Post, Daily Current Affairs 2 January 2023, we have tried to cover each and every point and also included all important facts from National/ International news that are useful for upcoming competitive examinations such as UPSC, SSC, Railway, State Govt. etc.

International Year of millets 2023: The Government of India sponsored the proposal for International Year of Millets (IYM) 2023 which was accepted by the United Nations General Assembly (UNGA). The declaration has been essential for the Indian government’s leadership in IYM celebrations. PM Narendra Modi has also shared his vision to make IYM 2023 a ‘People’s Movement’ alongside positioning India as the ‘Global Hub for Millets’.

International Year of millets: More About This Development:

Recognising the enormous potential of Millets, which also aligns with several UN Sustainable Development Goals (SDGs), the Government of India (GoI) has prioritized Millets. In order to increase marketing and demand generation, millets were rebranded as “Nutri Cereals” in April 2018, and 2018 was subsequently named the National Year of Millets. During the forecast period of 2021–2026, the worldwide millets market is anticipated to grow at a CAGR of 4.5%.

On 6th December 2022, the Food and Agriculture Organization (FAO) of the United Nations, organized an opening ceremony for the International Year of Millets – 2023 at Rome, Italy. The event was attended by a delegation of senior government officials from India. Next in the series, prior to the year-long celebration of ‘International Year of Millets (IYM) 2023’, the Department of Agriculture & Farmers Welfare hosted a special ‘Millet Luncheon’ for the Members of the Parliament at the Parliament house.

Further Development Regarding This:

The Ministry of Sports and Youth Affairs, Government of India, will launch IYM-related events during the month of January 2023 among central ministries. The ministry has planned 15 activities over 15 days in January which include engaging sports persons, nutritionists and fitness experts through video messages, conducting webinars on millets with leading nutritionists, dieticians and elite athletes, promotion amplification through Fit India App, etc. The Ministry of Food Processing Industries, FSSAI, and others are some of the other ministries with events scheduled for January. The Ministry of Food Processing Industries will host Millet Fair-cum-Exhibitions in Andhra Pradesh, Bihar, and Madhya Pradesh.

With respect to states, Chhattisgarh, Mizoram and Rajasthan have been allocated the month of January for carrying out specific activities for sensitization and promotion of IYM. The states will conduct millet-focused activities including mahotsavs, melas, and food festivals, farmer training, awareness campaigns, workshops, and seminars, the erection of hoardings at strategic areas around the state, the distribution of promotional materials, etc. Other states that are organizing similar activities in the month of January include Maharashtra, Uttarakhand and Punjab.

Millet is a common term for categorising small-seeded grasses that are often called Nutri-cereals. Some of them are sorghum (jowar), pearl millet (bajra), finger millet (ragi), little millet (kutki), foxtail millet (kakun), proso millet (cheena), barnyard millet (sawa), and kodo millet (kodon). Millets provide nourishment, resilience, revenue, and a means of subsistence for millions of smallholder dryland farmers throughout Sub-Saharan Africa and Asia. They also have a variety of uses, including those for food, feed, fodder, biofuels, and brewing.

Significance and benefits of millets:

Millets are nutritionally superior to wheat and rice owing to their higher protein levels and a more balanced amino acid profile. Millets also include a number of phytochemicals that have medicinal effects because of their anti-inflammatory and anti-oxidative properties. Further, besides being climate resilient, millet grains are rich sources of nutrients like carbohydrates, protein, dietary fibre, and good-quality fat; minerals like calcium, potassium, magnesium, iron, manganese, zinc and B complex vitamins. Most importantly, millet production is not dependent on the use of chemical fertilizers.

India produces all the nine commonly known millets and is the largest producer and fifth-largest exporter of millets in the world. One or more millet crop species are grown in the majority of Indian states. The principal states that produce millets include Rajasthan, Uttar Pradesh, Haryana, Gujarat, Madhya Pradesh, Maharashtra, Karnataka, Tamil Nadu, Andhra Pradesh, and Telangana.

India and Pakistan Exchange Lists of Nuclear Assets and Prison Inmates: Despite their bilateral relations being at an all-time low, India and Pakistan exchanged names of nuclear installations that cannot be struck in the case of hostilities, maintaining a tradition that dates back to 1992. The two sides further exchanged lists of prisoners held in each other’s jails, and the Indian side sought the early release and repatriation of civilian prisoners, missing defence personnel and fishermen, along with their boats, from Pakistan’s custody.

The first exchange of these lists took place on January 1, 1992, and this one was the 32nd in a row between the two countries. Under the provisions of the 2008 Agreement on Consular Access, the two sides also exchange lists of prisoners in each other’s custody twice a year, on January 1 and July 1, through diplomatic channels in New Delhi and Islamabad.

What Has Been Done:

How This Has Been Done:

The lists of nuclear installations and facilities were simultaneously exchanged through diplomatic channels in New Delhi and Islamabad according to provisions of the Agreement on the Prohibition of Attack against Nuclear Installations and Facilities. Both sides do not disclose details of such facilities.

The Air Marshal is a graduate of National Defence Academy, Pune and was commissioned into the IAF as a fighter pilot in June 1985.  He graduated from Wellington’s prestigious Defence Services Staff College.

Air Marshal Pankaj Mohan Sinha succeeds Air Marshal S Prabhakaran who superannuated on 31 December 2022 after putting in more than 39 years of distinguished service in the IAF.

India assume the charge of the Wassenaar Arrangement

In Wassenaar, Netherlands, in July 1996, the Wassenaar Arrangement was founded. The 42 members of this voluntary export control scheme. The member countries exchange information on transfers of conventional weapons and dual-use goods and technologies.

The main aim of the Wassenaar agreement is to discourage its member countries from exporting conventional weapons and dual-use goods and technologies to countries which are a threat to global peace.

The Arrangement’s governing and decision-making body, the WA Plenary, works by consensus. It is composed of representatives of all Participating States who normally meet once a year at Vienna, Austria.

Theme of the 108th Indian Science Congress 2023: Science and Technology for Sustainable Development with Women Empowerment”.

The Congress will hold discussions on issues of sustainable development, women empowerment and the role of science & technology in achieving this. A special programme to showcase the contribution of women in science and technology will also be held, which will also witness lectures by renowned women scientists.

Other Programmes at the ISC

Tribal Science Congress will also be held, which will also be a platform for scientific display of indigenous ancient knowledge system and practice, along with focusing on the empowerment of tribal women.

The Indian Science Congress Association owes its origin to the two British Chemists, Professor J. L. Simonsen and Professor P. S. Mac Mahon.  In 1914, it was founded in Kolkata.

It was their view that scientific research in India would be stimulated if an annual meeting of research workers somewhat on the lines of the British Association for the Advancement of Science could be arranged.

Every year its members meet annually in the first week of January named Indian Science Congress. The first session of the Congress was held in 1914.

North Korea fires ballistic missiles towards east of Korean peninsula: North Korea fired three ballistic missiles toward the sea east of the Korean Peninsula on Saturday, the South Korean military said. The launches were the latest in an unprecedented number of missile tests conducted by North Korea this year, as Pyongyang presses on with weapons development amid speculation it could test a nuclear weapon for a seventh time.

The three short-range ballistic missiles were fired from around 8 am local time (2300 GMT) from North Hwanghae Province, south of the capital Pyongyang, South Korea’s Joint Chiefs of Staff said.

ll three flew at an altitude of around 100 kilometres (62 miles) and covered a range of around 350 kilometres (217 miles), Kyodo news agency reported, citing Japan’s defence ministry. The launches came a day after South Korea’s defence ministry announced it had successfully conducted a test flight of a solid-propellant space launch vehicle. This latest volley comes 5 days after North Korea flew drones into South Korea’s airspace for the first time since 2017.

Former Pope Benedict XVI passes away at Vatican city: Pope Francis led tributes to his predecessor on Saturday, after Pope Emeritus Benedict XVI died in a monastery in the Vatican at the age of 95. The head of the Catholic Church, former Pope Benedict, was the first pope in 600 years to resign. He resigned in 2013, and Pope Francis took his place. In a 1000 years, Pope Benedict was the first German to hold the office. He was the head of the Vatican City from 19 April 2005 until his resignation on 28 February 2013. On April 16, 1927, in the southern German hamlet of Marktl, close to Austria, he was born Joseph Aloisius Ratzinger.

In October, Wang Yi, 69, was elevated to the Chinese Communist Party’s politburo and is anticipated to take on a larger role in foreign affairs.  He will replace Wang Yi, who is now a Member of the Political Bureau of the CPC Central Committee and State Councilor.

He was previously the spokesperson of the Foreign Ministry and later rose to the rank of Vice Minister is closely associated with Mr. Xi.

ISRO, Andhra University to Set up Equipment Along Beaches to Predict Rip Currents

ISRO, Andhra University to Set up Equipment Along Beaches to Predict Rip Currents: Indian Space and Research Organization (ISRO), National Centre for Earth Sciences (NCES), and the Andhra University (AU) have researched and concluded that constant rip current zones at blue flag-certified Rushikonda beach and RK Beach have become a danger to the beach visitors.

More than 200 individuals perished in the water between 2012 and 2022 at various beaches in and near Visakhapatnam, with RK Beach accounting for 60% of the deaths.

What are Rip currents?