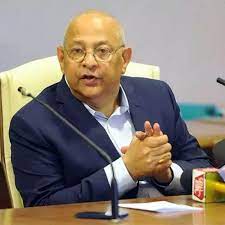 Amitabh Chaudhary, the former BCCI acting secretary and president of Jharkhand State Cricket Association (JSCA) died of heart attack on Tuesday morning.
He was 58. He served as acting secretary of the BCCI until 2019. He entered cricket administration in 2004 and served as the Jharkhand State Cricket Association (JSCA) president for over a decade.

Choudhary was first appointed as team manager of the Indian team in 2005 on their tour of Zimbabwe, remembered for the acrimony between Sourav Ganguly and Greg Chappell. Choudhary also served as BCCI’s joint-secretary from 2013 to 2015 during Anurag Thakur’s reign as BCCI president.

He was a retired senior IPS officer, who rose to the rank of IGP with the Jharkhand Police and was the chairman of the Jharkhand Public Service Commission. He played a crucial role in developing infrastructure for Jharkhand cricket.