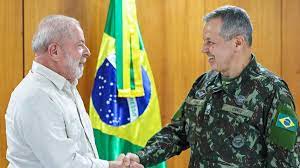 Arruda has been sacked in Brazil over the occupation of government buildings by supporters of former President Jair Bolsonaro.

General Tomás Miguel Ribeiro Paiva has been appointed as the country’s army chief in place of Arruda.

Unrest erupted in Brazil as supporters of former President Jair Bolsonaro stormed government buildings, the Brazilian Congress, the presidential palace and the Supreme Court. Military intervention was called for by the protesters to dismiss the newly elected Lula. Elections were held in Brazil in October. Bolsonaro was defeated in these elections, won by a leftist party led by Luiz Inacio Lula da Silva. Luiz Inacio Lula da Silva was sworn in as the President of Brazil for the third time. After this, Bolsonaro’s supporters refused to accept the election results.