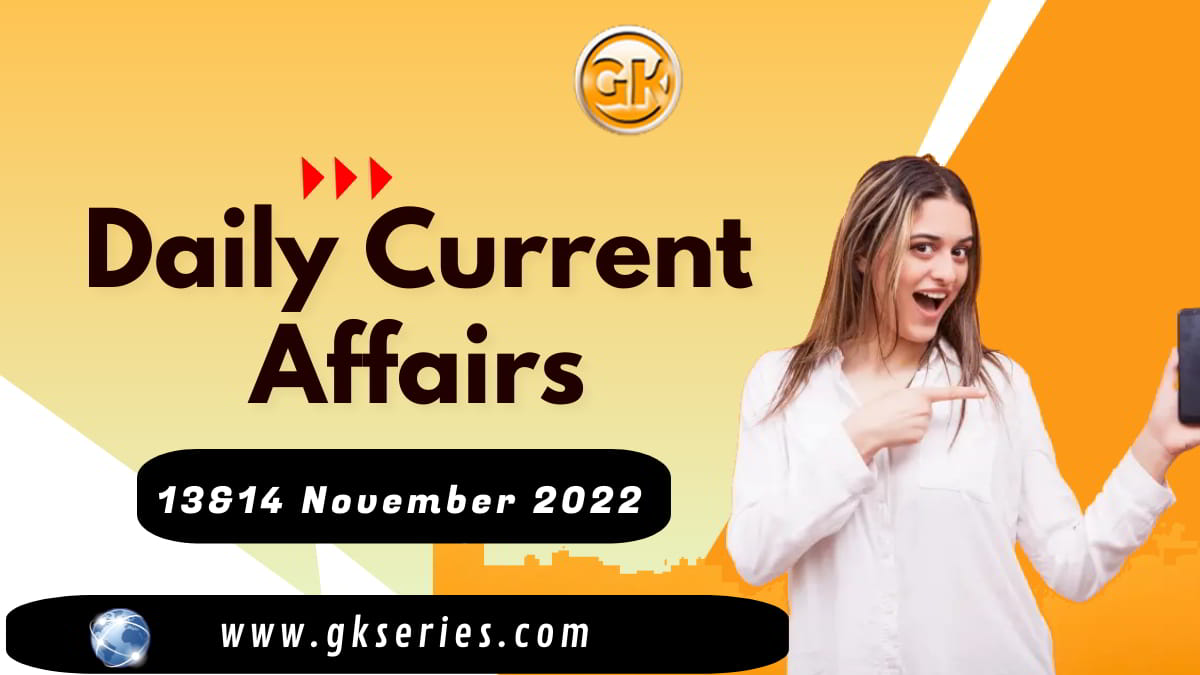 Current Affairs is the most important area in all competitive exams. But the difficulty level is very high. That’s why; many aspirants get confused, how to select Current Affairs for Preparation of Competitive Examination? In this Post, Daily Current Affairs 13&14 November 2022, we have tried to cover each and every point and also included all important facts from National/ International news that are useful for upcoming competitive examinations such as UPSC, SSC, Railway, State Govt. etc.

Children’s Day 2022: On November 14, India observes Children’s Day to mark the anniversary of the birth of Pandit Jawaharlal Nehru, the country’s first prime minister. The Indian politician Pandit Nehru was born on this day in 1889 in Allahabad, and it is his 133rd birth anniversary. Nehru was a great advocate for children’s right and for an all-inclusive education system where knowledge is accessible to all. He believed that children are the future of the country and the foundation of a society, and hence, everyone’s well-bring should be taken care of. Nehru was often called by the name “Chacha Nehru”. Bal Diwas is another name for Children’s Day in India.

Adorably referred to as Chacha Nehru, Jawaharlal Nehru believed that children are the future of the country and the foundation of a society. Apart from Nehru’s birth anniversary, Children’s Day is also celebrated to raise awareness on children education, rights and to see that proper care is accessible to all.

In many schools, children are asked to ditch school uniforms and wear party clothes. It’s a joyous occasion for all children, parents and teachers. The day will be observed by schools and other educational institutions with a number of instructional and inspirational programmes, including sporting events and quiz competitions.

About the Pandit Jawaharlal Nehru:

On November 14, 1889, Pandit Jawaharlal Nehru was born to a Kashmiri Brahman family. His family, who were noted for their administrative aptitude and scholarship, had migrated to Delhi early in the 18th century. He was a son of Motilal Nehru, a renowned lawyer and leader of the Indian independence movement, who became one of Mahatma Gandi’s prominent associates. Jawaharlal was the eldest of four children, two of whom were girls. A sister, Vijaya Lakshmi Pandit, later became the first woman president of the United Nations General Assembly.

Nehru, under the guidance of Gandhi, turned out to be a leader of India’s struggle for independence in 1947. He laid the foundation of independent India as sovereign, socialist, secular, and a democratic republic. For this, Nehru is credited as the architect of modern India.

World Diabetes Day 2022: Every year on November 14, people around the world mark World Diabetes Day to raise awareness of the health risks associated with diabetes and ways to prevent them. On this day, the enormous achievement of insulin discovery by two outstanding scientists, Sir Frederick Banting and Charles Best, is celebrated. The International Diabetes Federation (IDF) will be involved in coordinating activities on the day, so keep an eye out for an event near you! Any help or support you can give this cause will be greatly appreciated by everyone concerned.

﻿World Diabetes day is one of the largest diabetes awareness campaign organised every year, with its presence in more than 160 countries reaching and impacting the life of more than 100 crores with its awareness campaigns, advocacy for better access to treatment and quality informational content to tackle the diabetes.

Diabetes is a significant contributor to renal disease, heart attacks, strokes, blindness, and lower limb amputation. Healthy diet, physical activity and avoiding tobacco use can prevent or delay type 2 diabetes. In addition diabetes can be treated and its consequences avoided or delayed with medication, regular screening and treatment for complications. Diabetes is a chronic disease, which occurs when the pancreas does not produce enough insulin, or when the body cannot effectively use the insulin it produces. This leads to an increased concentration of glucose in the blood (hyperglycaemia).

This day is celebrated mainly to raise awareness of diabetes through campaigns reaching more than 1 billion people globally. Moreover, it promotes IDF advocacy efforts throughout the year. It helps acknowledge the importance of taking concerted actions to fight against diabetes.

World Diabetes Day is represented by a blue circle logo, adopted in 2007 by the UN Resolution. This logo is the symbol of diabetes awareness, signifying the unity of the global diabetes community.

World Diabetes Day (WDD) was founded by International Diabetes Foundation (IDF) with the collaboration with World Health Organization (WHO) in 1991, and it became official United Nation Day in 2006 under the UN Resolution 61/225. November 14 was picked as World Diabetes Day because it was the birth anniversary of Frederick Banting, who, along with Charles Best, discovered insulin. And in 1991, the day marked his 100th birthday anniversary, and therefore, it was announced as World Diabetes Day to raise awareness towards diabetes all across the world.

The announcement came during the three-day visit of Vice President Jagdeep Dhankhar to Cambodia for ASEAN-India and East Asia summits. On Saturday, he addressed the ASEAN-India summit. He addressed the ASEAN-India summit.  Vice President Dhankhar highlighted the global concerns on food and energy security, and emphasised the role of the East Asia Summit (EAS) mechanism in promoting free, open and inclusive Indo-Pacific with freedom of navigation and overflight.

The founding of the ASEAN India S&T working group in 1996 marked the official beginning of ASEAN-India science and technology collaboration (AIWGST). Initially, the collaborative S&T projects and activities between India and ASEAN were supported through ASEAN India Fund (AIF) but in 2008, a dedicated ASEAN India S&T Development Fund (AISTDF) with an equivalent amount of USD 1 million was established jointly by the Ministry of External Affairs and Department of Science and Technology (DST) to support R&D (Research and Development ) projects and associated project development activities.

The AISTDF was enhanced to an equivalent amount of USD 5 million through an announcement by the Prime Minister of India on the sidelines of the ASEAN-India Summit in Malaysia in November 2015.

The motto of ASEAN is “One Vision, One Identity, One Community”. 8th August is observed as ASEAN Day. ASEAN Secretariat is situated in Jakarta, Indonesia.

In this recent visit of VP, the Association of Southeast Asian Nations (ASEAN) and India vowed to establish a comprehensive strategic partnership and enhance cooperation against terrorism.

ISRO is set to launch 36 satellites of the UK’s global communications network OneWeb.

ISRO is set to launch 36 satellites of the UK’s global communications network OneWeb. : The satellites will be launched from Geosynchronous Satellite Launch Vehicle-Mark III (GSLV MkIII) from Satish Dhawan Space Center on 23 October. GSLV MkIII will be used for the first time for launching a commercial satellite. The cryogenic engine stage and the equipment bay assembly have been completed.

NewSpace India Ltd (NSIL) has signed a contract with OneWeb for launching broadband communication satellites in low earth orbit. It will be the company’s 14th mission to deploy satellites into orbit. In the next few months, NewSpace India Ltd (NSIL) will launch at least six commercial missions. OneWeb is a London-based global communications network. Bharti Global is a major investor in OneWeb. Currently, India has three operational launch vehicles – the PSLV, GSLV, and GSLV Mk III.

It is a three-stage launch vehicle developed by the Indian Space Research Organisation (ISRO). It has been designed to launch communication satellites into geostationary orbit.

Along with this, he has also secured a place in the 2024 Paris Olympics. He defeated Italy’s Danilo Dennis Sollazzo 17-15 in the gold medal match. He is the second Indian after Olympic gold medalist Abhinav Bindra to achieve this feat.

Bindra won a gold medal in this event in 2006 in Zagreb, Croatia. Rudrankksh entered the competition for the first time in the World Championship. Earlier, India won a bronze medal in the women’s 25m pistol team junior event. In the bronze medal match, the trio of Esha Singh, Namya Kapoor, and Vibhuti Bhatia beat Germany 17-1.

Abdul Latif Rashid has been elected as the new president of Iraq.

Abdul Latif Rashid has been elected as the new president of Iraq. : Rashid replaced Barham Saleh as head of state after two rounds of votes in parliament on 13 October. Mohammed Shia al-Sudani was named as prime minister-designate. Al-Sudani replaces caretaker Prime Minister Mustafa al-Kadhemi. Al-Sudani will now have 30 days to form a government.

In an October 2021 parliamentary vote, influential Shia leader Muqtada al-Sadr emerged as the biggest winner. He failed to form the government. Rashid hails from Sulaimaniyah, a major city in the semi-autonomous Kurdish region of northern Iraq. Under Iraq’s power-sharing system, the premiership falls under Shia blocs and the speaker of parliament is a Sunni. The presidency is reserved for Kurdish groups to nominate.

It is a country in Western Asia bordered by Turkey, Iran, Kuwait, Saudi Arabia, Jordan, Syria and Persian Gulf.

The new Electric Vehicle Manufacturing and Mobility Policy-2022 have been approved by the Uttar Pradesh cabinet.

Electric Vehicle Manufacturing and Mobility Policy-2022 have a provision for a three-pronged incentive system. This includes incentives to consumers for purchasing EVs; to manufacturers of EVs, EV batteries and related components; and to service providers developing charging/swapping facilities. Under the new policy, the state government will give huge subsidy on the purchase of electric vehicles. Subsidies are provided below.

10% subsidy on factory cost for purchasing e-goods carriers of up to Rs 1,00,000 per vehicle to a maximum of first 1,000 carriers. Subsidy up to a maximum of Rs 10 lakh per project to the service providers developing 2,000 charging and battery swapping facilities in the state. Capital subsidy of up to Rs 5 lakh per swapping station to the service providers developing facilities of 1,000 such swapping stations.

China and Kuwait are Asian countries that are ranked at the top of the list. 17 countries have been collectively ranked between 1 and 17 with a score of less than 5. Belarus, Bosnia & Herzegovina, Chile, China, Croatia, Estonia, Hungary, Kuwait, Latvia, Lithuania, Montenegro, North Macedonia, Romania, Serbia, Slovakia, Turkey and Uruguay are the top 17 countries. South Asian region has the highest hunger level, highest child stunting rate, and highest child wasting rate in the world. Yemen is at the last position in the Global Hunger Index 2022. The Global Hunger Index scores are based on four indicators- Undernourishment, Child stunting, Child wasting, and Child mortality.

The certification is part of the ‘Eat Right India’ movement- a large-scale effort by FSSAI to transform the country’s food system to ensure safe, healthy and sustainable food for all Indians. Eat Right India adopts a judicious mix of regulatory, capacity building, collaborative, and empowerment approaches to ensure that our food is suitable both for the people and the planet.