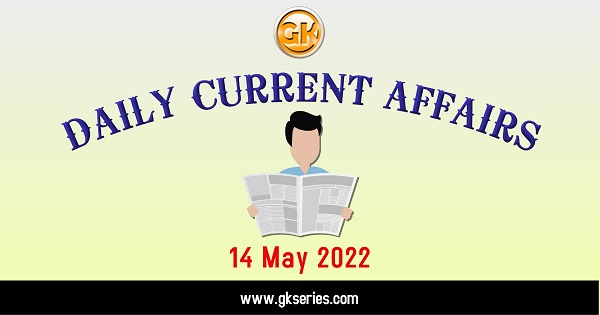 Current Affairs is the most important area in all competitive exams. But the difficulty level is very high. That’s why; many aspirants get confused, how to select Current Affairs for Preparation of Competitive Examination? In this Post, Daily Current Affairs 14 May 2022, we have tried to cover each and every point and also included all important facts from National/ International news that are useful for upcoming competitive examinations such as UPSC, SSC, Railway, State Govt. etc.

Current Affairs for Competitive Exam – 14 May 2022

Leonid Kravchuk, who led Ukraine to independence during the collapse of the Soviet Union and served as its first president, died Tuesday, Ukrainian officials said. He was 88.

Kravchuk was known as the “wily fox” and he rose through the ranks of Ukraine’s Communist Party. In 1990, he took over as head of the parliament. In 1991, He signed the Belovezha accords with Russian President Boris Yeltsin and Belarusian leader Stanislav Shushkevich which effectively triggered the Soviet Union’s collapse.

The Minister for Housing and Urban Affairs & Petroleum and Natural Gas, Shri Hardeep S Puri launched the BHARAT TAP initiative at the ‘Plumbex India’ exhibition. This exhibition is aimed for products and services related to the plumbing, water and sanitation industry.

This exhibition caters to a fundamental service in the development of the nation: water and sanitation. He also launched NARDECO MAHI’s ‘Nirmal Jal Prayas’ initiative which will work for saving 500 crore ltr of water per year.

He received the 2004 Nobel Prize in Physics along with David J. Gross, and H. David Politzer for his 1973 breakthrough in explaining the unusual properties of the strong force. Templeton Prize was established in 1972 by the late philanthropist Sir John Templeton.

ICICI Bank ties up with Santander for India-UK business ease

ICICI Bank, one of India’s largest private sector banks, established a partnership with Santander Bank in the United Kingdom, aimed at making banking easier for businesses operating in both countries. The ICICI and Santander UK Plc signed a MoU in Mumbai to build a framework of partnership between the banks to satisfy the financial service needs of corporate clients operating along the India-UK corridor.

The MoU will offer banking solutions across trade, cross-border payments, supply chain, treasury solutions and retail banking to the UK corporates operating in India. Santander UK will provide its support to Indian corporates and new-age businesses for their banking requirements in the UK.

Bharti AXA Life Insurance, a joint venture between Bharti Enterprises, one of India’s leading business groups, and AXA, one of the world’s largest insurance companies, announced the launch of its financial literacy campaign ‘InspiHE₹- enabling an empowered future’– a special initiative to spread financial awareness among women and enable them to make informed financial decisions for a secured future.

Bharti AXA aims to improve the health or life insurance situation gradually. It launched an initiative in honour of ‘International Mother’s Day and ‘International Day of Families’ that aims to empower women, particularly moms, by teaching them the fundamentals of financial planning and saving in order to ensure their future.

Rajiv Kumar appointed as next Chief Election Commissioner, to take charge on May 15

Kumar also served as the chairman of the Public Enterprises Selection Board. He joined as the PESB chairman in April 2020. Rajiv Kumar is a 1984 batch Indian Administrative Service (IAS) officer. He has “worked in various ministries at the centre and his state cadre of Bihar and Jharkhand,” a government statement had said earlier.

The Government has spent approximately Rs. 2.60 Lakh Crore so far and another Rs. 80,000 Crore will be spent over the next 6 months till September 2022 taking the total expenditure under PM-GKAY to nearly Rs. 3.40 Lakh Crore. PM-GKAY scheme will help more than 80 million people in the country. Each beneficiary under the PM-GKAY will be provided with an additional 5 kg free ration per person each month.

The UN General Assembly has voted for the Czech Republic to replace Russia on the world organizations leading human rights body after its suspension over horrific rights violations by Russian soldiers in Ukraine.

The Czech Republic was the only candidate for the seat on the 47-member Human Rights Council. Out of 193 members, 180 of the General Assembly have deposited ballots (157 countries in favour).

The Ministry of Tourism has initiated the establishment of ‘YUVA Tourism Clubs’ as a part of the ‘Azadi ka Amrit Mahotsav’ celebrations.

Aims: To nurture and develop young ambassadors of Indian tourism.

To support this initiative, the Central Board of Secondary Education (CBSE) has come forward and issued directions to all CBSE affiliated schools regarding the formation of Yuva Tourism Clubs.

Prime Minister Narendra Modi has participated in the Second Global COVID Virtual Summit on the invitation of the President of the USA, Joseph R. Biden. The theme of the summit: Preventing Pandemic Fatigue and Prioritizing Preparedness.

PM Modi had also participated in the first Global COVID.

Chairman of Bajaj Finserv Limited, Sanjiv Bajaj has assumed the office of Confederation of Indian Industry (CII) President for the year 2022-23 after replacing TV Narendran (CEO of Tata Steel).

The Chairman and CEO of Hero MotoCorp Limited, Pawan Munjal has taken over as CII President-Designate for 2022-23. Executive Vice Chairman of TVS Supply Chain Solutions, R Dinesh has been appointed as a Vice President of CII.