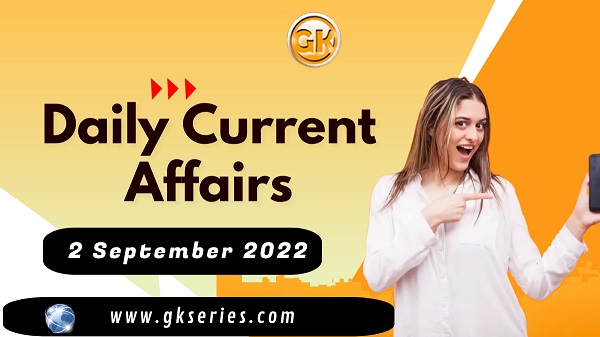 Current Affairs is the most important area in all competitive exams. But the difficulty level is very high. That’s why; many aspirants get confused, how to select Current Affairs for Preparation of Competitive Examination? In this Post, Daily Current Affairs 2 September 2022, we have tried to cover each and every point and also included all important facts from National/ International news that are useful for upcoming competitive examinations such as UPSC, SSC, Railway, State Govt. etc.

The school will be for classes IX to XII and will be affiliated to the Delhi Board of School Education. The platform was created by two globally recognised organisations, Google and Schoolnet India. Virtual school teachers have received special training to conduct online classes. The platform will also provide students access to a huge digital library and the content.

Why this virtual school open?

Nagesh Singh has been appointed as next ambassador of India to Thailand.

He is presently Joint Secretary in the Ministry of External Affairs. He will replace ambassador, Suchitra Durai and is expected to take up the assignment shortly. Nagesh Singh is a 1995 batch officer of the Indian Foreign Service (IFS) who has served as Consul General of India in Atlanta.

HM, Amit Shah has launched the Central Armed Police Forces’ eAwas web-portal to operationalise the revised policy of allotment and bring transparency to the allotment process.

The web-portal will enable online registration and allotment of residential quarters to eligible personnel of CAPFs and Assam Rifles. CAPF has been classified into three major categories: Border Guarding Forces; Forces for Internal Security; and Special Task Force.

The Home Minister said, till now there was such a system in CAPF that only the force for which the houses were built were made available to them, due to which thousands of houses were left vacant. Mr Shah said, vacant accommodation will be available to the personnel of other CAPFs from the eAwas portal. He said, with the efforts of the Modi Government, the housing satisfaction rate which was 33 per cent in 2014 will go up to 73 per cent by 2024.

The Union Home Minister said, to make the transfer process of CAPF personnel more transparent, the Narendra Modi government has created e-transfer software. He said, it is currently being run in ITBP and CISF on an experimental basis and soon it will be available to all.

Ministry of Home Affairs said, increasing the Housing Satisfaction Ratio for CAPFs personnel is one of the priority areas of the Government. In order to operationalise the revised policy of allotment and to also bring transparency to the allotment process, a common web-portal ‘CAPF eAwas’ has been developed. The web-portal will enable online registration and allotment of residential quarters to eligible personnel of CAPFs and Assam Rifles.

India has observed National Nutrition week from September 1 to September 7 every year to make people aware about the adequate nutrition in food while enjoying the different flavours of Indian cuisine.

The theme of National Nutrition Week 2022 is to ‘Celebrate a World of Flavours.’ An annual week-long celebration has been organised by the Food and Nutrition Board of the Government of India’s Ministry of Women and Child Development.

Cabinet has approved an MoU with the Government of Nepal on biodiversity conservation to strengthen and enhance coordination and cooperation in the field of forests, biodiversity conservation, and climate change. This MoU also aims the restoration of corridors and interlinking areas and sharing of knowledge and best practices, between the two countries.

With the help this, machine can directly harvest water from the air and the commuters can refill their bottles for Rs 12 per litre and Rs 8 for 500 ml. The Railways has already installed 17 kiosks across six major stations, including five each at CSMT and Dadar, four at Thane, and one each at Kurla, Ghatkopar and Vikhroli.

As per the data released by RBI, during the first quarter of 2022-23, the pricing index for homes in India has been grown by 3.5% year-on-year. The all-India house price index (HPI) is a quarterly release done by the central bank.

This index is based on transaction-level data obtained from the housing registration authorities in 10 major cities in the country. The cities are: Ahmedabad, Bengaluru, Chennai, Delhi, Jaipur, Kanpur, Kochi, Kolkata, Lucknow, and Mumbai.

The domestic firms had invested over $2.56 billion on Outward Foreign Direct Investment in July 2021 in the form of equity, loan and issuances of guarantees. The Indian businesses has invested $579.15 million by equity infusion, $193.21 million as loans and $337.49 million infused by issuing guarantees to their overseas ventures.

As per the official data, Indian economy has been grown by 13.5% in the April-June period 2022, this is the fastest in the last four quarters.

Reason: Better performance by the agriculture and services sectors.

India has also remained the fastest growing major economy as China registered economic growth of 0.4% in the April-June 2022 quarter. As per the data released by the National Statistical Office, the Indian economy has been grown by 20.1% in April-June 2021-22.

ONGC has appointed interim chairman in Rajesh Kumar Srivastava for a period of 4 months with effect from September 1, 2022, to December 31, 2022 (i.e the date of his superannuation) or until further orders, whichever is the earliest. He is the senior-most director on the ONGC board.

He has been given additional charge of chairman and managing director after current acting head Alka Mittal has been superannuated.

Athletics Federation of India (AFI) has joined hands with HSBC India to support women athletes of the country.

Under the partnership, promising girl athletes will be selected from the National Inter District Championships for U-14 and U- 16 categories. Special coaching camps would be set up for the selected athletes and nurtured them to perform on the global platform.

It was a part of the International Counter Ransomware Initiative- Resilience Working Group. The Group is being led by India under the leadership of National Security Council Secretariat.