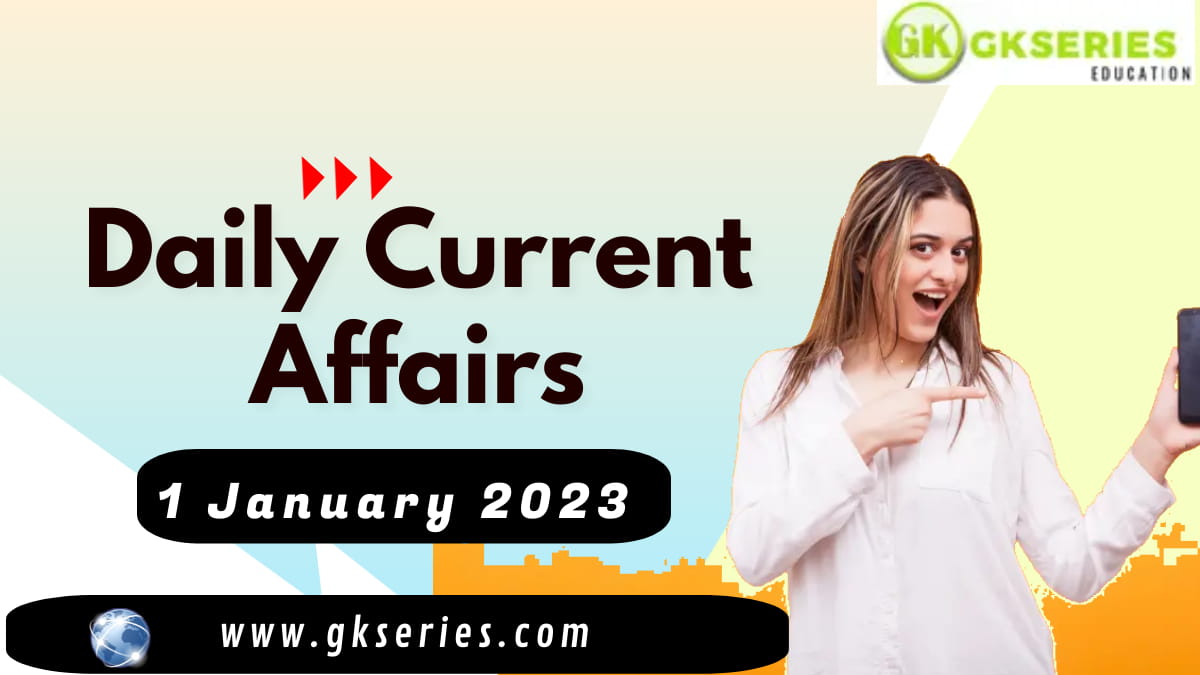 Current Affairs is the most important area in all competitive exams. But the difficulty level is very high. That’s why; many aspirants get confused, how to select Current Affairs for Preparation of Competitive Examination? In this Post, Daily Current Affairs 1 January 2023, we have tried to cover each and every point and also included all important facts from National/ International news that are useful for upcoming competitive examinations such as UPSC, SSC, Railway, State Govt. etc.

BHIM Celebrates its Sixth Anniversary: BHIM (Bharat Interface for Money), a locally created payment application, recently celebrated its sixth birthday. On December 30, 2016, Prime Minister Narendra Modi unveiled the BHIM App. Bharat Interface for Money is referred to as BHIM. It is a biometric payment system app based on the Unified Payment Interface (UPI) that allows for e-payments to be made directly through the bank using the Aadhar platform.

It can be used on all mobile devices whether it’s a smartphone or feature phone or a phone without an internet connection. The payments through the BHIM App can be made with just a thumb impression after the bank account is linked with the Aadhar gateway.

BHIM or Bharat Interface for Money is an Indian mobile payment app developed by the National Payments Corporation of India (NPCI) based on the Unified Payments Interface (UPI). The 30th of December 2016 saw the release of the BHIM App. It is intended to facilitate e-payment directly through banks and encourage cashless transactions. It bears the name of eminent Dalit activist Dr. Bhimrao Ambedkar.

The application supports all Indian banks which use UPI, which is built over the Immediate Payment Service (IMPS) infrastructure and allows the user to instantly transfer money between 170-member Banks of any two parties.

NDTV Founders to Get Rs 602 Crore from Sale of 27.26% to Adani Enterprises

NDTV Founders to Get Rs 602 Crore from Sale of 27.26% to Adani Enterprises: Prannoy Roy and his wife Radhika Roy, the founders of NDTV, sold an additional 27.26% ownership share to The Adani Group, which announced the deal to stock exchanges. The billionaire Gautam Adani-backed Adani Group acquired shares from Roys at Rs 342.65 per share which was 16.55 per cent higher than the open offer price of Rs 294 per share.

More About This Issue:

An indirect subsidiary of the corporation, Vishvapradhan Commercial Private Limited, owns 8.27% of the equity in NDTV, while RRPR previously owned 29.18% of the ownership in NDTV. Following the current transaction, RRPR will hold 56.45% of the company. Adani Group has acquired Roys’ share at deal worth Rs 602.30 crore. On December 30, 2022, the transaction was finalised on the NSE block deal window.

About The Whole Time-line of This Acquisition:

Adani Group inadvertently purchased RRPR Holding Pvt Ltd in August, which led to an open offer to buy an additional 26% of the media company. Adani Group acquired a 29.18 per cent stake in NDTV by buying a company backed by the television network’s founders, Radhika Roy and Prannoy Roy. Thereafter, it made an open offer to acquire an additional 26 per cent from public shareholders.

Despite the substantial discount from the stock’s market price, investors were willing to sell approximately 53 lakh shares of NDTV in response to that open offer. The stock tendered translated to an 8.26 per cent shareholding, taking the total interest of Adani Group in NDTV to 37.44 per cent – higher than the 32.26 per cent holding of founders.

SpaceX Launched First 54 Starlink v2.0 satellites Into Low Earth orbit: The first 54 v2.0 or Gen2 Starlink Satellites were launched into low Earth orbit by the SpaceX Falcon 9 rocket. The SpaceX Falcon 9 was launched on 28th December 2022, and it took place from the SLC-40 launch pad of the US Air Force Base at Cape Canaveral. Since the start of 2022, 60 SpaceX missions have been completed successfully.

Tata Motors to complete acquisition of Ford India’s manufacturing Plant in January: On January 10th 2023, Tata Motors will complete the acquisition of Ford India’s Sanand manufacturing facility through a subsidiary. Ford India Pvt Ltd (FIPLSanand )’s Plant in Gujarat will be purchased by the company’s unit Tata Passenger Electric Mobility Ltd (TPEML) for Rs 725.7 crore, according to the announcement.

All eligible employees of FIPL’s vehicle manufacturing plant have been offered employment with TPEML on terms, conditions, and benefits of service similar to those that are currently available to them. FIPL employees who have accepted its offer of employment will become TPEML employees with effect from 10th January 2023.

Tata Motors informed that its passenger and electric vehicles business has delivered “market-beating growth over the last few years and has strong plans to sustain this momentum. With this acquisition, an additional, cutting-edge manufacturing capacity of 3,00,000 units annually will become available. This capacity can be increased to 4,20,000 units annually.

India’s second longest cable-stayed eight-lane Zuari Bridge opens in Goa: Nitin Gadkari, the Union Minister for Roads, Transport, and Highways, opened the second-longest cable-stayed, eight-lane Zuari Bridge in the nation in Goa. Right-hand side (4-lane corridor) across the Zuari River and approaches from Bambolim to Verna were thrown open for vehicular traffic. Gadkari also launched the PWD Goa App for integrated operations management. The families of the workers who passed away during the bridge’s construction each received Rs 2 lakh from Chief Minister Pramod Sawant through the Goa government’s insurance programme.

About the Zuari Bridge:

The Zuari Bridge is a bridge between North Goa and South Goa, India. It carries the NH 66 over the tidal part of the Zuari River, between the villages of Agaçaim and Cortalim. It is a few metres downstream of the Konkan Railway Bridge. The 640-metre-long bridge and the 13.20 km roads on both sides have been built in 3 phases. The Zuari Bridge work began in June 2016.

The report was issued on the Performance of Information Commission (ICs) in India for 2021-22 by Satark Nagrik Sangathan.

About the Arata Isozaki:

Isozaki studied architecture at the University of Tokyo, the premier university in Japan, and then began his architectural career as an apprentice under the tutelage of Japanese icon Kenzo Tange, a 1987 Pritzker winner. Isozaki founded his own office, Arata Isozaki & Associates, which he called “Atelier” around 1963, while working on a public library for his home prefecture of Oita — one of his earliest works.

He was one of the forerunners of Japanese architects who designed buildings overseas, transcending national and cultural boundaries, and also as a critic of urban development and city designs. Among Isozaki’s best-known works are the Museum of Contemporary Art in Los Angeles and the Palau Sant Jordi stadium in Barcelona built for the 1992 Summer Games. He also created enduring structures like the Team Disney Building and the Florida headquarters of the Walt Disney Company.

IPS officer Laxmi Singh: Laxmi Singh, an IPS officer, has been named the new head of the Noida Police Department by the Uttar Pradesh government, making her the first woman to lead a Police Commissionerate in the state. The 2000-batch officer, who replaced Alok Singh in Gautam Buddh Nagar. Alok Singh, a 1995-batch IPS officer, has been posted as an additional director general of police (ADGP) at the DGP office in state capital Lucknow.

Food Processing Industry Invests Nearly Rs 4,900 Crore Under PLI Scheme: According to the government, the production-linked incentive (PLI) scheme has so far attracted investments of Rs 4,900 crore from the food processing sector. The PLI scheme for the food processing industry was approved in March 2021, with a budget outlay of Rs 10,900 crore. It will be implemented for seven years, until 2026-27.

In total, 182 applications for the PLI scheme for the food processing industry have been approved. This includes 30 applications for millets-based products under the PLI scheme (8 large entities and 22 SMEs). Incentives of Rs 800 crore are probably going to be given out in the current fiscal year. Sales-based incentive of Rs 107.3 crore has been disbursed so far.

PLI beneficiaries’ investments are likely to increase sales and exports of food products. The scheme requires that the entire chain of manufacturing processes, including primary processing of food products, take place in India in order to qualify for the incentive, which is expected to boost domestic industry. It was also stated that the scheme will aid in the promotion of Indian brands abroad.

The ministry stated that a total of 112 food processing projects were completed and operationalised during 2022, leveraging private investment of Rs 706.04 crore and generating direct and indirect employment for 25,293 people. Throughout the year, about 190 projects related to food processing were approved.

Food processing is the transformation of raw ingredients into food, or of food into other forms (ie. food processing may denote direct manufacturing of food or value addition on existing food). Food processing typically takes harvested crops or butchered animal products and uses these to produce long shelf-life food products.

Why are food processing industries significant?

Madras High Court: Mobile Phones Banned in Tamil Nadu’s Temples- The Madras High Court’s Madurai Bench has ruled that visitors to Tamil Nadu temples are not allowed to bring cell phones inside. The Division Bench of Justice R. Mahadevan and J Sathya Narayana Prasad held that the gadgets divert the attention of the devotees from the purpose of visiting the temple.

The Tamil Nadu Temple Entry Authorization Act 1947, and the Rules empower the trustees or any authority in charge of the temple to make regulations for the maintenance of order and decorum in the temple.