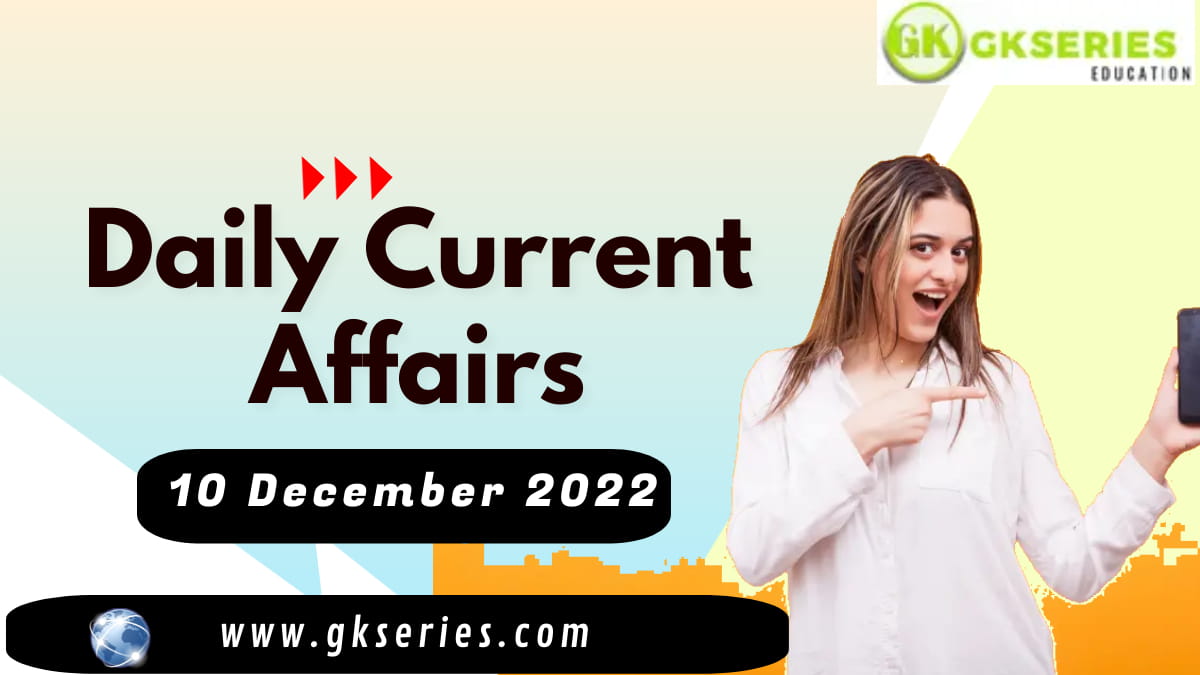 Current Affairs is the most important area in all competitive exams. But the difficulty level is very high. That’s why; many aspirants get confused, how to select Current Affairs for Preparation of Competitive Examination? In this Post, Daily Current Affairs 10 December 2022, we have tried to cover each and every point and also included all important facts from National/ International news that are useful for upcoming competitive examinations such as UPSC, SSC, Railway, State Govt. etc.

Digital Rupee vs UPI, Know the Difference Between eRupee and UPI

To buy a Digital Rupee, users must go to the official app or website of one of the four certified banks. The precise procedure for purchasing digital rupee hasn’t been made explicit by the RBI, but it has stated that customers would be able to make purchases using QR codes displayed at merchant locations, and the money will be withdrawn from bank wallets.

Using Digital Rupee, one can shop and make purchases at neighbouring Kirana outlets. Both individuals and businesses are able to swap digital rupees.

Digital Rupee vs UPI: About UPI

UPI, in contrast to Digital rupee, merely serves as an interface for financial transactions involving actual money. While one cannot withdraw Digital Rupee from their bank account, it is merely another type of money similar to fiat money. The UPI interface, however, enables consumers to conduct online transactions using their bank account. Fiat money is essentially used for all transactions.

Difference between Digital Rupee and UPI

Human Rights Day 2022: Every year on December 10, people all across the world observe Human Rights Day. It marks the day that the United Nations General Assembly (UNGA) adopted the Universal Declaration of Human Rights (UDHR) in 1948. Human Rights Day highlights the fundamental freedoms and rights to which all people, regardless of location, are entitled. It celebrates and advocates for rights that cut across the distinctions of nationality, gender, ethnicity, race, sexual orientation, religion, or any other position. This year marks the 74th anniversary of the adoption of the UDHR and the 72nd Human Rights Day.

Why is Human Rights Day celebrated?

The purpose of Human Rights Day is to raise awareness of human rights. The right to economic, social, and educational freedoms are also included in the category of human rights. Human rights are those fundamental natural rights from which human beings cannot be deprived or oppressed on the basis of race, caste, nationality, religion, gender etc.

The UDHR will celebrate its 75th anniversary on December 10 of 2023. A year-long effort to highlight the UDHR and highlight its legacy, relevance, and activism will be launched on December 10 this year in honour of this forthcoming milestone. The campaign’s primary theme will be “Dignity, Freedom, and Justice for All.”

Human Rights Day was formally instituted in 1950 after the UNGA passed resolution 423 (V). Under the resolution, the Assembly had invited all states (members and non-members) and interested organisations to observe this day to celebrate the proclamation of the UDHR and exert increasing efforts in this field of human progress. Over the past decade, Human Rights Day has taken up topics such as discrimination, diversity, education, freedom, poverty, torture, and equality.

Throughout her learning experience, she has taken the help of numerous sources to perfect her knowledge and skillsMansi has over 25 years of yoga experience as well as numerous national and international certifications. She has written several articles and books on the philosophy of yoga and how it can benefit all body types through a series of Asanas.

This book introduces the concept of “face yoga,” a facial workout that is done naturally in addition to other yoga poses. Additionally, facial yoga helps you relax and revitalise your body. The face yoga ‘as an as’ release stress and tension from the face and neck. Additionally, they will increase our awareness of our face muscles so that we can instantly relax them, which in turn helps to indirectly tighten our skin. Moreover, yoga helps in building concentration level and teaches an individual to achieve a calm mind, thus channelising energy throughout the body. ‘Face yoga’ is a comprehensive work on facial exercises written in lucid simple language which can be easily be understood by a beginner to an eminent practitioner.

The large number of photographs enable better comprehension, easy assimilation and understanding. The author offers a complete face yoga programmable for beauty and General health as well as pose sequences that address specific health problems, and General well being too. The chapters have been well thought of and the book makes an interesting reading. This book is not only inspirational you to ‘just follow it and do it’—but it also gives pragmatic instructions needed to put things in the right perspective. An engaging and must read book.

The program will be organized at International Co-operation and Convention Center Rudraksh Hall. Health ministers of different states will participate in the programme.

The first Regional Community Health Officers (CHO) Conference for Northern India will take place at Varanasi during the event. At the regional conference will be concerned government representatives from the medical profession from Uttar Pradesh, Bihar, Jharkhand, Madhya Pradesh, and Uttarakhand. Universal Health Coverage (UHC) aims that ‘all people have access to needed promotive, preventive, curative and rehabilitative health services, of sufficient quality to be effective, while also ensuring that people do not suffer financial hardship when paying for these services’.

Award for Application of Science and Technology for Rural Development:

Award for Development and Welfare of Women and Children:

About the Jamnalal Bajaj Foundation:

The Jamnalal Bajaj Foundation, which was founded in 1977, established four Awards to spread Jamnalal Bajaj’s values throughout the world. The annual awards are the Foundation’s gratifying felicitation to those women and men involved at the grassroots level, who are committed to inclusive development, working in line with Mahatma Gandhi’s constructive work program and who have taken a vow to selflessly serve the people, their community and nation, at large. Three National and one International Award categories are used for the Jamnalal Bajaj Awards. Each award comprises a Citation, a Trophy and a Cash Prize of Rs. 10, 00,000.

Tata Sons Chairman N Chandrasekaran appointed as the Chairman of B20

B20 India: N Chandrasekaran, the chairman of Tata Sons, has been chosen to lead B20 India, the organisation that speaks for the whole G20 business community. He will lead the business agenda during India’s G20 Presidency. The B20 India process will be coordinated by CII, who was nominated by the Indian government and took over as the B20 India Secretariat on December 1. The Confederation of Indian Industry (CII) in an official statement said that B20 India will commence work on various taskforces and action councils after the inception meeting, scheduled on 22-24 January 2023, culminating into the B20 India Summit in August.

About the B20 India:

B20 India work will be conducted through Task Forces and Action Councils, which will develop consensus-based policy recommendations to the G20. After the initial conference, set for 22–24 January 2023, work will begin on several taskforces and action councils, culminating in the B20 India Summit in August 2023. B20 India has identified priorities for deliberations under the theme “R.A.I.S.E – Responsible, Accelerated, Innovative, Sustainable, and Equitable Businesses. About 100 business policy initiatives will be organised by CII under the B20 calendar across the country during the presidency year. B20 India’s agenda focuses on integration into global value chains and building trade resilience, innovation and R&D, and skilling and mobility of workers, amongst others. It will also prioritize financing growth and sustainable infrastructure, and financial inclusion. The themes of energy, climate change, and resource efficiency will be high on the agenda, along with digital transformation.

UP Governor to inaugurate Universal Coverage Day 2022 : Union Health and Family Welfare Ministry will organize a two days conclave commemorating Universal Coverage Day 2022 at Varanasi, Uttar Pradesh on 10th December 2022. The conclave will be inaugurated by the Governor of Uttar Pradesh Anandiben Patel in the presence of Health Minister Dr. Mansukh Mandaviya.

Universal Health Coverage aims to provide promotive, preventive, curative and rehabilitative access of health services. It also ensures that people do not suffer financial hardship while paying for these services. Health Ministers from various States along with state officials will attend the event. Our correspondent reports that more than one thousand two hundred participants will join the conference including 900 Community Health Officers, Incharge of Health and Wellness Centres.

Focus: Improve the network’s connectivity with bus and feeder services.

The project will construct an elevated section between Sholinganallur to SIPC, underground section between Lighthouse and Meenakshi College and system component (between Chennai Mofussil Bus Terminus to Okkiyam Thoraipakkam).

The project will construct 10.1 kilometers (km) of the elevated section between Sholinganallur to State Industries Promotion Corporation of Tamil Nadu-2, including 9 metro stations and system components. Another 10 km of the underground section between Lighthouse and Meenakshi College including 9 stations; and 31 km of system components, such as electrical, mechanical, power, and telecommunication infrastructure, between Chennai Mofussil Bus Terminus to Okkiyam Thoraipakkam will also be funded by the ADB loan.

Aim: To showcase the efficacy and strength of the AYUSH systems of medicine at the Global level.

The third edition of the ‘Ayushman’ comic book series was also released at the event. The market size of AYUSH in the country has grown from $3 billion in 2014 to over $18 billion now, clocking a phenomenal growth of six times. During 2014-2020, the AYUSH industry grew 17 per cent year-on-year while the Ayurveda market is predicted to grow at 15 per cent CAGR from 2021-2026. Over 4500 participants from all over the world including 400 foreign delegates from 53 countries are participating in the 9th World Ayurveda Congress & Arogya Expo. The Arogya Expo is set to witness participation of more than 215 companies, leading Ayurveda brands, medicine manufactures and Ayurveda related educational and Research & Development institutions. Prime Minister Narendra Modi is scheduled to attend the valedictory function of WAC on 11 December.

Musk, who has had held the top spot on the Forbes list for world’s richest since September 2021, has a net worth of $185.3 billion. As of December 9, 2022, the personal wealth of Bernard Arnault is $186.1 billion and net worth of Elon Musk is $185.0 billion. But as per the Bloomberg’s Billionaires Index, the Tesla CEO is still estimated to be the world’s wealthiest person with a net worth of $171 billion (As of 9th Dec 2022).

LVMH, which also owns household names like Fendi, Christian Dior and Givenchy, rose 0.4% during the first hours of trading on Monday, putting its market cap at $320 billion and pushing Arnault’s personal stake up by more than $600 million.