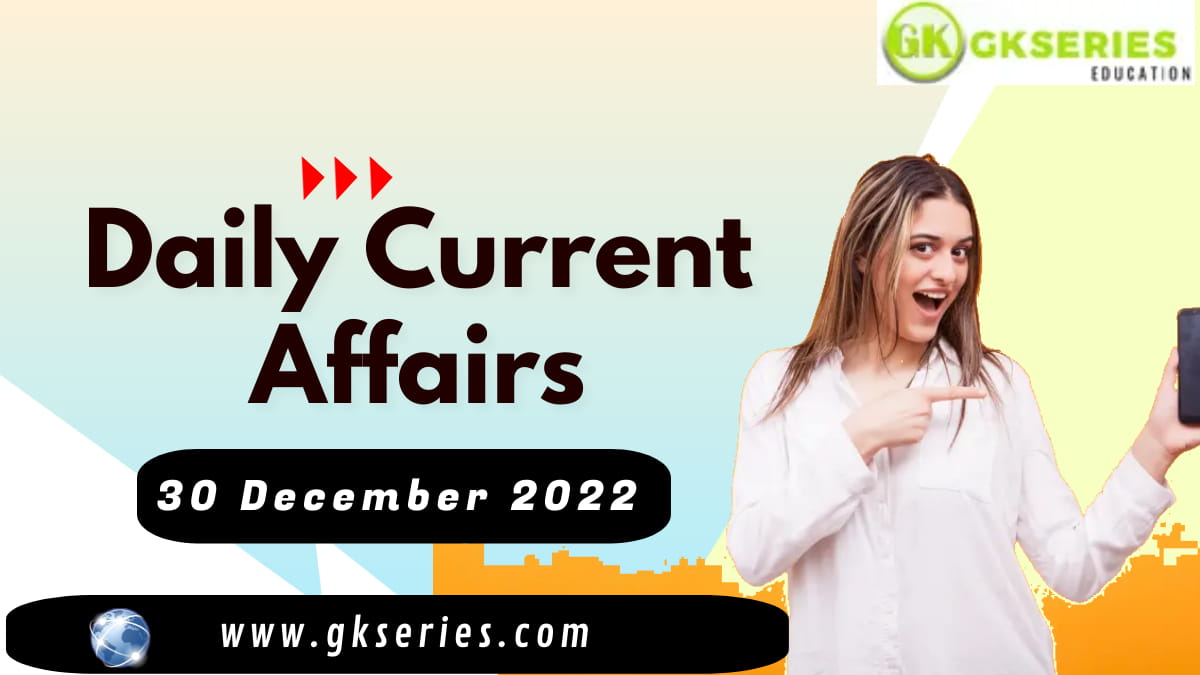 Current Affairs is the most important area in all competitive exams. But the difficulty level is very high. That’s why; many aspirants get confused, how to select Current Affairs for Preparation of Competitive Examination? In this Post, Daily Current Affairs 30 December 2022, we have tried to cover each and every point and also included all important facts from National/ International news that are useful for upcoming competitive examinations such as UPSC, SSC, Railway, State Govt. etc.

The development of hyperloop technologies is the focus of the deep tech startup TuTr Hyperloop. It aims to offer consumers quick, dependable “on-demand” transportation that is less expensive and more environmentally friendly than traditional forms of transportation. The first hyperloop test track in India (and Asia) is currently being constructed on the IIT Madras Discovery campus. TuTr hopes to use its collaboration with IIT Madras and proximity to India’s greatest deep tech ecosystem to spur the creation of affordable Hyperloop technologies that will improve a variety of sectors’ productivity by addressing their problems with the flow of goods.

Edson Arantes do Nascimento, better known as Pelé, was a legendary player in Brazilian football. He died at the age of 82. He is considered by many as one of the greatest footballers of all time. His contributions to Brazil’s three World Cup triumphs in 1958, 1962, and 1970 cannot be overstated. With 77 goals in 92 games, he continues to lead the Brazil national team in scoring. He retired from Santos in 1974 but a year later made a surprise comeback by signing a lucrative deal to join the New York Cosmos in the then nascent North American Soccer League.

More About This Project:

The 720 MW project Mangdechhu Hydroelectric Power Project was jointly inaugurated by Prime Minister Narendra Modi and his Bhutanese counterpart Lotay Tshering in 2019. Bhutan’s electrical power generation capacity has increased by 44% since the project’s commissioning, to 2,326 Mega Watts. The Project has generated more than 9000 million units of energy since its commissioning, reducing 2.4 million tons of emissions annually.

The Mangdechhu Hydropower Project will cut annual greenhouse gas emissions by about 2.4 million tonnes. The Institute of Civil Engineers, London awarded the project with Brunel Medal 2020 as a recognition of its excellence in civil engineering and the project’s social and environmental credentials.

PM Modi’s mother Heeraben dies at 99: Mother of Prime Minister Narendra Modi Heeraben Modi passed away early on Friday in a hospital in Ahmedabad. She was 99.The news of her passing was announced in a bulletin from the UN Mehta Institute of Cardiology and Research Centre, where she was taken on Wednesday when her condition began to deteriorate.

Several individuals accompanied PM Modi during the final rituals for his mother, Heeraben, including Gujarat CM Bhupendra Patel. Along with his brother, PM Modi ignited the funeral pier.

About the Mr. Srivastava:

The Bekal International Beach festival: The “Bekal International Beach Festival,” a cultural extravaganza, is currently taking place in North Malabar, often known as the Spice Coast, in the far north of Kerala. Chief Minister Pinarayi Vijayan has inaugurated the 10-day first international beach festival, that captures the wholeness and the essence of the district’s cultural and artistic uniqueness and displays the rich cultural diversity and grandeur of the country, at the majestic Bekal Beach Park.

About the Bekal International Beach festival

It is put on by the Bekal Resorts Development Corporation (BRDC) in collaboration with the district’s local self-government entities, Kudumbashree, Asmi Holidays, and the District Tourism Promotion Council. In Kerala, festival dates are decided in accordance with the Malayalam calendar and the local traditions and customs.

Atal Samman Award: At the 9th Atal Samman Samaroh, held at Vigyan Bhawan in New Delhi on the anniversary of the birth of the nation’s former prime minister Atal Bihari Vajpayee, a number of individuals who had significant contributions to make in a variety of sectors were honoured.  Prabhu Chandra Mishra has been awarded Atal Samman Award for his excellence in field of science & research. His area of work is Stem Cell & Regenerative Medicine in infertility especially when IVF also fails. The diseases like premature ovarian failure, thin endometrium, Asherman syndrome Etc have shown satisfactory results with body’s own cells. PRP & bone marrow-derived StemCells Research have shown promising hope for these patients/ couples who are struggling for their own child’s.

About the Prabhu Mishra:

At the same time, the banking regulator flagged the issue of slippages from restructured accounts. “Going forward, it is imperative that banks ensure due diligence and robust credit appraisal to limit credit risk,” the report said.

PSBs account for 62% of the deposits of scheduled commercial banks, while on loans, they corner 58% market share.

Credit growth of banks was at a 10-year high at the end September 2022. Commenting on the profitability of commercial banks, the report said their return on equity (RoE) and return on assets (RoA) improved to levels last observed in 2014-15.

The asset quality of Indian banks continued to improve with gross non-performing assets (GNPAs) as a percentage of gross advances further falling in September 2022, to 5 per cent, as compared to 5.8 per cent in March 2022. “This decrease was led by lower slippages as well as reduction in outstanding GNPAs through recoveries, upgradations and write-offs,” the report said.

AG 365- Agricopter is extensively tested in Agriculture in collaboration with prestigious agriculture universities and research institutes in the development of crop-specific SOPs for safe, reliable, and effective agriculture operations. It also said the AG 365 is designed and developed for Indian conditions and can be used for multiple purposes and is eligible for 10 lakh rupees unsecured loans from the agri-infrastructure fund offered by the Centre at a minimum interest rate.

It is extensively tested in Agriculture in collaboration with agriculture universities and research institutes. It is designed and developed for Indian conditions and can be used for multiple purposes.

MeitY, the Nodal Ministry for the G20 Digital Economy Working Group (DEWG), has represented India in numerous working groups and Ministerial sessions during previous presidencies. During India’s G20 presidency, MeitY will focus on three priority areas, namely Digital Public Infrastructure (DPI), Cyber Security, and Digital Skill Development, together with the Stay Safe Online campaign and DIA programme under the DEWG. MeitY aims to carry forward the vision of the digital transformation of the global digital economy for public service delivery through innovation and a future-ready digitally skilled workforce in a secure cyber environment.

Aim of ‘Stay Safe Online’: To raise awareness about the online world due to the widespread use of social media and rapid adoption of digital payments

Aim of G20-DIA: To identify, recognize, and enable the adoption of innovative and impactful digital technologies developed by startups