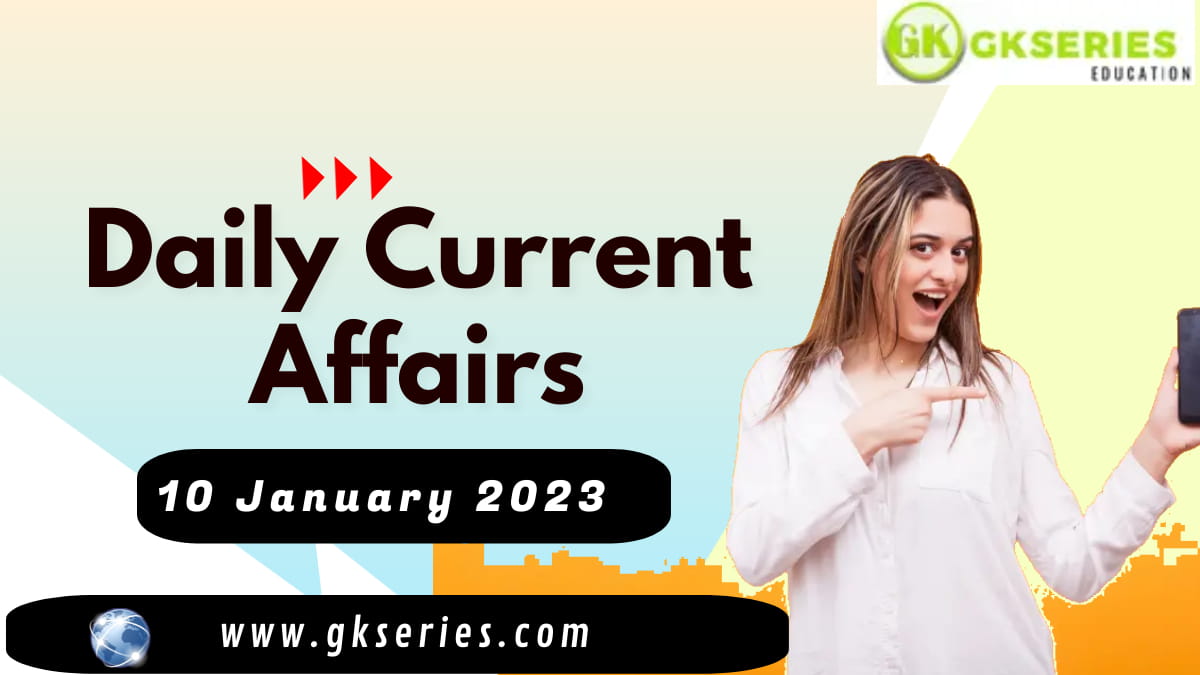 Current Affairs is the most important area in all competitive exams. But the difficulty level is very high. That’s why; many aspirants get confused, how to select Current Affairs for Preparation of Competitive Examination? In this Post, Daily Current Affairs 10 January 2023, we have tried to cover each and every point and also included all important facts from National/ International news that are useful for upcoming competitive examinations such as UPSC, SSC, Railway, State Govt. etc.

Aim: To showcase how we can come together to create a welcoming and inclusive world for everyone.

The festival aims to showcase how we can come together to create a welcoming and inclusive world for everyone. Earlier, Union Minister for Social Justice & Empowerment Dr. Virendra Kumar inaugurated a two day sensitization workshop on ‘’Issues relating to Empowerment of persons with Disabilities’ in association with the Purple Festival in Goa. The objective of the workshop was to sensitize the Government, Non-Govt, Corporate Sector about their role to create an inclusive society and also to have a co-ordinated approach towards the empowerment of Divyangjan. Shri Subhash Phal Dessai, Minister for Social Welfare, River Navigation, Archives and Archeology, Government of Goa, Shri Rajesh Aggarwal, Secretary, Department of Empowerment of persons with Disabilities, Govt. of India were present on this occasion.

CJI Chandrachud to be conferred with ‘Award for Global Leadership’

Reason: In recognition of his lifetime service to the legal profession in the country and around the world.

The award will be presented to him at an online event on January 11, 2023.

The release has quoted David Wilkins, CLP faculty director, saying: “I know how much India, and indeed the world, need Justice Chandrachud’s leadership, particularly on issues such as mental health and the well-being of lawyers, which he spoke about so eloquently at our conference in 2017 – long before the global pandemic placed this issue in the forefront of the profession’s consciousness.”

He took over as the 50th CJI on November 9, 2022. He obtained an LL.M. degree and a Doctorate in Juridical Sciences (SJD) from the Harvard Law School.

On December 8, he had fractured his hand after falling in the washroom. He also had general weakness besides decreased oral intake and urine output and was admitted to the ICU of a private hospital on December 30. After undergoing treatment at the hospital for a week, Tripathi was brought home, where he passed away at around 5am, family members said.

He was a governor of West Bengal from July 2014 to July 2019. He had also served as the governor of Bihar, Meghalaya and Mizoram, and speaker of UP legislative assembly. He had also worked as a senior advocate at the Allahabad High Court. He authored several books such as “The Age of Wings”, “Sanchayita:Kesharinath Tripathi”, “Destination Jesus”.

Under the leadership of Prime Minister Shri Narendra Modi, the kite of development of Gujarat has been crossing new heights for two consecutive decades.  He further said that the Kite Festival is an opportunity to touch the sky and reach new heights. Kite is a symbol of progress, progress and flight and Gujarat’s festivals like Kite Festival have become international attractions, he added.

The theme of this festival will be held with the theme of G20 – ‘One Earth, One Family, One Future’.

The event is organized after a gap of two years due to the covid 19 pandemic. The delegates from G20 countries have been invited to the inauguration of the international kite festival 2023 to exchange their culture.

Startup India Innovation Week 2023 aims to engage startup ecosystem stakeholders across the nation during 10th January-16th January 2023 and spur the spirit of entrepreneurship and innovation in India.

Startup India Innovation Week 2023 will include Knowledge Sharing Sessions for entrepreneurs, aspiring entrepreneurs, and other enablers, involving relevant stakeholders from the startup ecosystem such as government officials, incubators, corporates and investors.

As a part of Azadi Ka Amrit Mahotsav celebrations, various startup related events are being organised in more than 75 places across the country to foster a spirit of entrepreneurship and innovation by involving the startup community across length and breadth of the country.

The National Startup Awards 2022 winners will be honoured in an event hosted by DPIIT on January 16, 2023, National Startup Day, a flagship programme of Startup India. The ceremony will recognise and reward the excellence exhibited by startups and ecosystem enablers across different sectors, sub-sectors, and categories.

It was also announced that 16th January (Startup India Initiative was launched on this day in 2016) will be celebrated as National Start-up Day, to take the Startup culture to the far flung areas of the country.

Championships were awarded in each of the five categories:

In partnership with the Association of Indian Universities, the SPMVV is organising the occasion for the third time (AIU). In all, there will be 27 competitive events during the five-day festival. Of the eighteen universities that deputed student contingents to the event, Kerala ranked first with seven varsities.

Ranking of these Blocks:

NITI Aayog in partnership with the states will release a quarterly ranking of these blocks based on their performance on development indicators covering sectors such as health, education and nutrition among others.

Features of the ADP:

Weightage has been accorded to these districts as below:

World Hindi Day 2023: Every year on January 10th, World Hindi Day, also known as Vishwa Hindi Diwas, is observed to raise awareness of the language throughout the globe. It is also the day when Hindi, India’s national language, was spoken for the first time in the United Nations General Assembly. It was on this day in 1975 that the first World Hindi Conference was held in Nagpur. Since since, these conferences are held annually in various locations across the globe.

Notably: The language got its name from the Persian term ‘Hind’ which means ‘the land of Indus’. The language is spoken in India, Trinidad, Nepal, Guyana, Mauritius and other countries.

“Hindi – Traditional Knowledge to Artificial Intelligence” is the theme for this year. This year, the 12th World Hindi Conference will be organised in Fiji by the Foreign Ministry in collaboration with the Fiji government from February 15 to 17. The location for the 2023 event was decided during the 11th World Hindi Conference held in Mauritius last year.

To recognise the significance of Hindi as a language, the World Hindi Day or Vishwa Hindi Diwas is observed. It is considered one of the official national languages in India, especially in the northern part of the country. The day is also celebrated to represent the Hindi-speaking community on a global level. The Ministry of External Affairs organises a number of events worldwide to raise awareness of Hindi on the occasion of World Hindi Day.

The Union of India adopted Hindi as its official language in 1950. According to Article 343, the Constitution of India states that the official language of India shall be Hindi in Devanagari script. Rashtrabhasha Prachar Samiti, Wardha, had the idea for the inaugural World Hindi Conference in 1973. On January 10, 1975, Nagpur hosted it. Its aim was to promote the language on a global level. The conference saw the participation of 30 countries with 122 representatives.

First observed in 2006 on Manmohan Singh’s orders as prime minister, Vishwa Hindi Diwas. The date of January 10 was chosen as Hindi was spoken for the first time in the United Nations General Assembly on January 10, 1949 . In 1975, the World Hindi Conference was formed by then Prime Minister Indira Gandhi for bringing together Hindi scholars, writers and laureates who have contributed to the development of the language and appreciate their contributions.

Bharat Petroleum Corporation Limited: A Maharatna and Fortune Global 500 company, Bharat Petroleum Corporation Limited (BPCL), has announced the introduction of Low Smoke Superior Kerosene Oil (SKO) for the Indian Army in Jammu. BPCL has emerged as the first OMC to commence the supply of the new LSLA grade SKO supplies to the Army, which will go a long way in improving the serving environment and alleviate the issues related to smoke and smell in use of SKO.

Why this step taken?

Normal kerosene emits substantial smoke, which poses a health hazard to the Army personnel who use it at higher altitudes, where oxygen level is very low. Hence, the low-smoke kerosene is a big step towards providing a cleaner fuel to our soldiers operating in very tough terrains.

Benefits of this oil:

Paytm Payments Bank: The RBI has approved the appointment of Surinder Chawla as the Managing Director and CEO of Paytm Payments Bank.The RBI, however, continues to bar Paytm Payments Bank from on-boarding new customers. Before joining PPBL, Chawla was working with RBL Bank, where he served as Head – Branch Banking and focused on expanding the CASA base, fee revenue, and cross-selling across channels. The latest appointment, according to the company’s regulatory filing, is part of PPBL’s continued efforts to develop its leadership team, improve its technological capabilities, and promote financial inclusion in the nation.