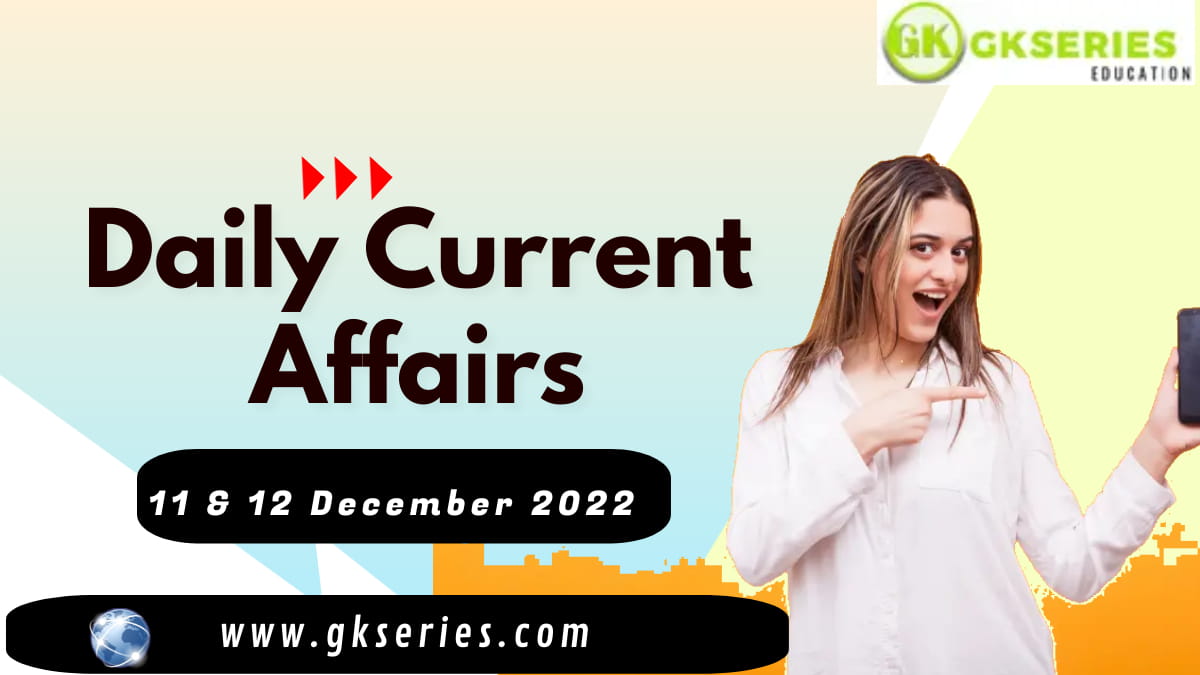 Current Affairs is the most important area in all competitive exams. But the difficulty level is very high. That’s why; many aspirants get confused, how to select Current Affairs for Preparation of Competitive Examination? In this Post, Daily Current Affairs 11&12 December 2022, we have tried to cover each and every point and also included all important facts from National/ International news that are useful for upcoming competitive examinations such as UPSC, SSC, Railway, State Govt. etc.

International Day of Neutrality 2022: On December 12, a day of neutrality is observed everywhere. It is a day when people look at the possibility of a world free of armed and other types of conflicts. Its main objectives were to promote and advocate for peaceful intra-state relations. Switzerland serves as the perfect example of neutrality.

Neutrality, defined as the legal status arising from the abstention of a state from all participation in a war between other states, the maintenance of an attitude of impartiality toward the belligerents, and the recognition by the belligerents of this abstention and impartiality, is critically important for the United Nations to gain and maintain the confidence and cooperation of all in order to operate independently and effectively, especially in situations that are politically charged.

The International Day of Neutrality serves as a reminder of the significance of neutrality, particularly in light of humanitarian reasons. During armed conflicts, it is neutrality that NGOs and other humanitarian agencies are able to care for casualties in a proper way. The day serves as a reminder to work for world peace. It challenges people to envision a future devoid of conflict and explains how, by combining efforts, everyone can achieve this goal a reality.

On February 2, 2017, the UN General Assembly accepted resolution 71/275, proposed by Turkmenistan, without a vote, recognized by the UN as a permanently neutral state since 12 December 1995, which noted the link between the preservation of peace and the 2030 Agenda for Sustainable Development, and declared 12 December as the International Day of Neutrality.

Tamil Nadu Becomes First State To Launch Its Own Climate Change Mission: The first state to start its own climate change mission will be Tamil Nadu. It had launched the Green Tamil Nadu Mission last September and the Tamil Nadu Wetlands Mission this August. The State Climate Action Plan will be carried out by a Special Purpose Vehicle called the Tamil Nadu Green Climate Company (TNGCC).

Ahead Of The Nation:

According to M K Stalin, the chief minister of Tamil Nadu, the state is on track to become carbon neutral well before the national target of 2070. “Our government views climate change as a major humanitarian crisis. We have taken various measures to protect the environment after assuming power. Global warming has occurred due to high carbon emissions. Many scientists have said the world should reach carbon neutral by 2050. Last year in COP26 the Indian government declared that it will become carbon neutral by 2070. Let me assure you that Tamil Nadu will achieve carbon neutrality before that,” Stalin said.

Key Goals Of This Mission:

Stalin stated this initiative is not just for Tamil Nadu or India, but for the world. “Climate change is a concern for all of us and the Tamil Nadu Government takes the issue very seriously. I am proud to lead from the front. I see this as my life’s mission,” he said.

President of the Congress Mallikarjun Kharge, party leader Rahul Gandhi, AICC General Secretary Priyanka Gandhi, State Party President Pratibha Singh, chief ministers of Chhattisgarh and Rajasthan, as well as Sachin Pilot, were all present during the inauguration of the new government in Himachal.

Notably: On December 8, the Congress made a comeback in Himachal Pradesh, by winning 40 seats in the high-stakes electoral contest for the 68-member Legislative Assembly. The BJP could win only 25 seats while Independent candidates won three seats.

About the Sukhwinder Singh Sukhu:

A four-time MLA from the Nadaun constituency in Himachal Pradesh and the head of the Congress’s election committee in the state, Sukhu, who is a law graduate, began his career in student politics and went on to rise to the position of state unit chief. Sukhwinder Singh Sukhu was the general secretary of the Himachal Pradesh unit of the Congress-affiliated National Students’ Union of India (NSUI). Later, he became the president of NSUI.

In the Hamirpur district’s Nadaun, he won the assembly elections for the first time in 2003. The seat was then kept by him until 2007, when he lost it once more until winning it back in 2017 and 2022.

India’s First Carbon Neutral Farm Inaugurated In Kerala: A seed farm in Aluva was designated as the first carbon-neutral farm in the nation by Kerala Chief Minister Pinarayi Vijayan. A significant reduction in carbon emission has helped the seed farm, achieve the carbon neutral status.

The total amount of carbon emission from the farm, located at Thuruthu in Aluva, in the last one year was 43 tons but its overall procurement was 213 ton. Compared to the emission rate, as many as 170 tons of more carbon have been procured at the farm, which helped it to be declared as the first carbon neutral seed farm in the country.

What Has Been Said: Extent Of This Move:

“Carbon neutral farms will be set up in all 140 Assembly constituencies. Efforts have already been launched to make 13 farms in Kerala carbon neutral,” Chief Minister said. Carbon neutral agricultural methods would be implemented through women’s groups and such interventions would be made in the tribal sector as well, Mr Vijayan added.

Even as the state moves towards the goal to achieve food self-sufficiency, plans to maintain ecological equilibrium are also equally important, the Chief Minister said. Using carbon neutral agricultural methods, it is possible to prevent up to 30% of greenhouse gas emissions from agriculture and control climate change, he added.

What is Carbon Neutrality:

According to the definition of the Intergovernmental Panel on Climate Change (IPCC), carbon neutrality, or net zero CO2 emissions, refers only to carbon dioxide emissions and is a state of balance between the CO2 emitted into the atmosphere and the CO2 removed from the atmosphere.

In actual business practice, organizations often use the term “carbon neutrality” to include all greenhouse gas (GHG) emissions when they announce their ambitious emissions reduction targets. There are a number of ways of achieving the balance we are talking about. Not emitting more CO2 than can be naturally absorbed by the world’s forests and plants is the healthiest course of action, which act as carbon sinks through the process of photosynthesis – they take in CO2 from the air and turn it into oxygen – helping to reduce emissions.

Each year on 12 December, UHC advocates raise their voices to share the stories of the millions of people still waiting for health, champion what we have achieved so far, call on leaders to make bigger and smarter investments in health, and encourage diverse groups to make commitments to help move the world closer to UHC by 2030.

This year’s theme, “Establish the world we want: A healthy future for everyone,” emphasises the significance of equity, trust, healthy environments, investments, and accountability in order to build effective health systems, according to the UN.

On 12 December 2012, the United Nations General Assembly endorsed a resolution urging countries to accelerate progress toward universal health coverage (UHC) – the idea that everyone, everywhere should have access to quality, affordable health care. In 2017, the International Day for Universal Health Coverage was established by the UN.

Every year on this day, advocates for universal healthcare give speeches to applaud the progress that has been made thus far and to acknowledge that a sizable portion of the population still does not have access to healthcare. Additionally, they implore decision-makers to commit their organisations to work toward achieving universal health coverage by 2030 and to spend more money wisely on health.

Agarwal joins the Hinduja flagship, with a 21.28 billion rupee market cap, from Escorts Kubota Ltd., where he served as President-Agri Machinery and Construction Equipment. Prior to that, he spent more than seven years as the Chief Executive of Escorts’ Agri machinery division. During that time, he played a key role in the transformation of the company’s farm equipment division by leading transformative marketing initiatives, introducing disruptive business models and products, and creating new benchmarks for cost-effectiveness.

Agarwal, an MBA from Duke University, USA, and a B.Tech. from NIT Kurukshetra, brings with him more than 30 years of experience. He has worked across sales and marketing, product development, R&D, strategy, and project management.

Since Vipin Sondhi abruptly left his role as MD and CEO in November 2021, citing personal and family commitments, Ashok Leyland’s Board has been looking for a qualified candidate.

Sondhi served as MD & CEO of the company between December 2019 and December 2021. Over these months, Dheeraj Hinduja, as Executive Chairman, has been steering the company.

Shenu has a proven track record as a leader from a business conglomerate and is an allrounder having worked in different capacities in many disciplines. With Shenu in charge, Ashok Leyland’s reliability focus, worldwide expansion ambitions, and ongoing pursuit of increasing stakeholder value will all be strengthened, according to Executive Chairman Dheeraj Hinduja.

The toolkit from the World Bank attempts to highlight the gender-related problems with urban planning and mobility. Diverse perspectives on cities are held by men, women, and gender minorities.

The World Bank toolbox provides resources to assist these groups in strengthening policies, addressing gender-disaggregated migration patterns, and developing an infrastructure that will meet their needs. This toolkit will be helpful in discussions on urban planning and mobility as Indian urban local bodies and transport agencies start to comprehend the demands of different commuters.

In Principle” Approval for 21 Greenfield Airports

What is a greenfield airport?

A greenfield airport is one that is built from scratch on undeveloped land, where no work has been done in the past. This airport is built to minimize the congestion at the existing airports. Usually, it is at a greater distance from the city and constructed in a way that special consideration is given to the environmental impact.

Who governs the development of greenfield airports?

The Greenfield Airports (GFA) Policy, 2008 governs the development of greenfield airports in India. According to this policy, a state government or an airport developer, who is willing to set up a greenfield airport, is required to send the proposal to the Union Ministry of Civil Aviation for a two-stage approval i.e., Site-Clearance approval and “In Principle” approval.

In Principle Approval for 21 Greenfield Airports

The Central Government has accorded the “in principle” approval for setting up 21 greenfield airports.

Of these 21 greenfield airports, nine have been operationalized. These are Kannur, Durgapur, Shirdi, Pakyong, Kalaburagi, Orvakal (Kurnool), Sindhudurg, Kushinagar, and Donyi Polo, Itanagar.

The Gujarat Government received in principle approval from the Indian Government for the development of two greenfield airports in Hirasar (Rajkot) and Dholera (Ahmedabad).

KOUSHAL encourages the children to reason critically, solve problems with team spirit and make them discover the Indian contribution to the world in the field of science and technology. 55,012 students from 2,431 schools in all 26 districts took part in the competition, which was held only for government school students.

Mansi Gulati, an international Yogi, celebrated author, and thought leader, devoted her efforts to learning everything possible about yoga practices and philosophy.

This book introduces the concept of ‘face yoga’, a natural exercise for the face in addition to various other yoga exercises. Facial yoga can also help you relax and rejuvenate your body. The face yoga ‘as an as’ release stress and tension from the face and neck. They will also make us more aware of our facial muscles so that we can relax them within seconds that indirectly helps to tighten our skin.

For her leadership during the Ukraine war, as well as her handling of the Covid-19 pandemic, European Commission president Ursula von der Leyen sits atop the 19th annual Forbes list of the World’s 100 Most Powerful Women.