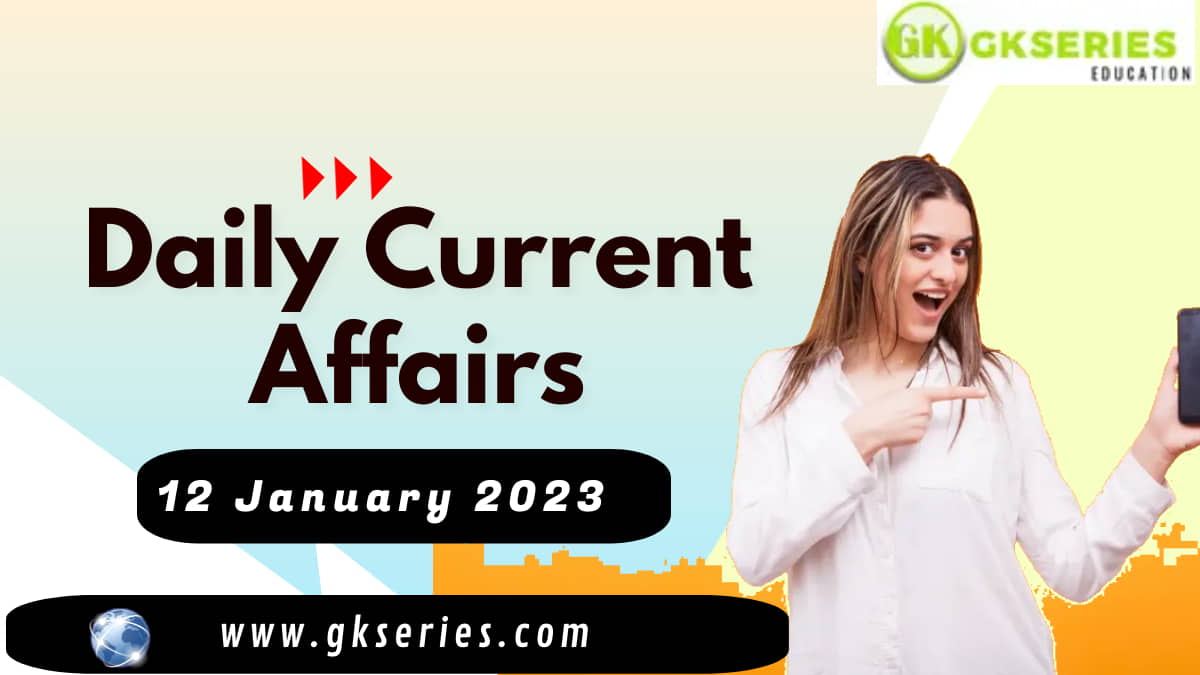 Current Affairs is the most important area in all competitive exams. But the difficulty level is very high. That’s why; many aspirants get confused, how to select Current Affairs for Preparation of Competitive Examination? In this Post, Daily Current Affairs 12 January 2023, we have tried to cover each and every point and also included all important facts from National/ International news that are useful for upcoming competitive examinations such as UPSC, SSC, Railway, State Govt. etc.

National Youth Day 2023: Swami Vivekananda’s birthday, January 12, is commemorated annually with National Youth Day. The government organises the National Youth Festival each year on this occasion in collaboration with a state that is ready to host from January 12 to January 16. This year Prime Minister Narendra Modi inaugurate the festival on January 12 in Huballi, Karnataka.

The basic objective of National Youth Day is to bring the youth of the country together in an attempt to showcase their talents in various activities to cover almost all socio-cultural aspects of life, providing an opportunity to amateur young artists to express themselves and interact with fellow artists and to further learn the new art forms from experts of various disciplines.

According to the Centre, the festival is staged to give youths exposure on a national scale, and the four-day program’s theme this year is “Viksit Yuva – Viksit Bharat (Developed Youth – Developed India)”.

The festival is being put on this year by the Karnataka and the Union Ministry of Youth Affairs & Sports. The event will be held from January 12 to January 16, 2023, at Hubballi- Dharwad, Karnataka. More than 30,000 youth will attend the inaugural function where the Prime Minister will share his vision with them. During this unique five-day event, over 7500 youth delegates from all over India, recognized and leaders in their own field of activity, get together to engage in different learning activities.

The government declared January 12th, the date of Swami Vivekananda’s birth, as “National Youth Day” in 1985. Since then, all the centres of Ramakrishna Math and Ramakrishna Mission have been celebrating the occasion through various programmes.

World Bank Predicts India’s Economic Growth to Slow to 6.9% in FY23: As the global economy and growing unpredictability weigh on export and investment growth, the World Bank predicts that India’s GDP would drop to 6.9% in Financial Year 2023, a 0.6 percentage point decrease since June. However, India is expected to be the fastest growing economy among the seven largest developing economies. The World Bank predicted that global growth in 2023 would slow to 1.7 per cent from the 3 per cent expected six months ago, citing elevated inflation, higher interest rates, reduced investment and disruptions caused by Russia’s invasion of Ukraine.

More About This Transition: A Steady Decline In GDP Growth:

In India, growth is anticipated to slow from 8.7% in FY 2021–22 to 6.9% in FY2023-23, with the latter estimate having been revised lower by 0.6 percentage points since June. The global economic slowdown and rising uncertainty will weigh on export and investment growth. Government infrastructure spending and various business facilitation measures will crowd in private investment and support the expansion of manufacturing capacity.

A Further Deterioration In Growth Prospects:

Growth is expected to slow to 6.6 per cent in FY2023-24 before returning to its potential rate of just above 6 per cent. India is predicted to have the fastest growing economy among the seven largest developing economies (EMDEs).

Given the global economy’s precarious state, any new negative development—such as higher-than-expected inflation, sharp rises in interest rates to contain it, a resurgence of the Covid-19 pandemic, or escalating geopolitical tensions—could send it into recession. This would be the first time in more than 80 years that two global recessions occurred within the same decade.

The IMF predicts that global growth would decline from 6% in 2021 to 3.2% in 2022 and 2.7% in 2023. Global growth has slowed due to the lag effect of global central banks tightening monetary policy and weakening external demand. The RBI forecasts a 6.8 per cent growth in India’s GDP in FY23.

National Road Safety Week: To promote the idea of safer roads for everyone, the Ministry of Road Transport & Highways, Government of India, will observe Road Safety Week from January 11 to January 17, 2023, as part of “Swachhata Pakhwada”.  During the Week, various activities is being organised throughout the Country to create awareness among general public and to give an opportunity to all stakeholders to contribute to the cause of road safety. This includes various awareness campaigns related to causes of road accidents and measures to prevent them. Various activities with School/college students, drivers and all other road users have also been planned.

Defence Ministry Approves Proposals Worth Rs 4,276-cr for Anti-tank, Air Defence Missile Systems: Three proposals worth 4,276 crore rupees were approved by the Defence Acquisition Council (DAC) to improve the nation’s deterrent and battle readiness. According to the Defense Ministry, Rajnath Singh, the defence minister, presided over a meeting of the Defense Acquisition Council. The DAC has accorded approval for procurement of HELINA Anti-Tank Guided Missiles, launchers and associated support equipment which will be integrated to the Advanced Light Helicopter. This missile is an essential part of weaponization of Advanced Light Helicopter for countering enemy threats. According to the Ministry, its introduction will increase the Indian Army’s capacity for offence.

There were three proposals – two for the Army and third was for the Indian Navy. According to the defence ministry, the DAC accepted three capital acquisition requests totaling Rs. 4,276 crore as necessary. The DAC granted approval for procurement of Brahmos Launcher and Fire Control System (FCS) for the Shivalik class of ships and next generation missile vessels (NGMVs) for the Indian Navy. With their induction, these ships would have enhanced capability of carrying out maritime strike operations, interdicting and destroying enemy’s warships and merchant vessels.

The DAC also accorded approval for procurement of VSHORAD (IR Homing) missile system. The Defence Ministry said, in view of the recent developments along the Northern borders of the country, there is a need to focus on effective Air Defence weapon systems which can be deployed quickly in rugged terrain and maritime domain.

The acquisition of the VSHORAD missile system will improve the capability of air defence. The DAC granted approval for procurement of Brahmos Launcher and Fire Control System for the Shivalik class of ships and Next Generation Missile Vessels for the Indian Navy.

DAC Nod to VSHORAD Missile Systems Being Designed by DRDO

DAC Nod to VSHORAD Missile Systems Being Designed by DRDO: The Defence Acquisition Council (DAC) approved the proposal for the purchase of the VSHORAD (IR Homing) missile system, which is being designed and developed by the Defence Research and Development Organization, in an effort to strengthen the air defence systems along the Line of Actual Control (LAC) facing China (DRDO). In view of the recent developments along the Northern borders(China) there is a need to focus on effective Air Defence (AD) weapon systems which are man portable and can be deployed quickly in rugged terrain and maritime domain. Procurement of VSHORAD, as a robust and quickly deployable system, will strengthen the Air Defence capabilities.

About The Timeline of This Procurement:

Since 2018, India and Russia have been negotiating the purchase of Igla-S air defence missiles for $1.5 billion through the VSHORAD programme in an effort to replace Russian Igla-M systems that the Army has been using. However, with a strong pitch for ‘Atmanirbharta’ in defence, there has been little progress on this front in the last two years, with sources indicating that the deal has been put on hold for now.

It is a man-portable air defence system (MANPADS). These are short-range, lightweight and portable surface-to-air missiles that can be fired by individuals or small groups to destroy aircraft or helicopters. They can engage targets at an altitude of 4.5 km and have a maximum range of 8 km.

The missile incorporates many novel technologies including a miniaturized Reaction Control System (RCS) and integrated avionics, which have been successfully proven during the tests. The RCS is responsible for attitude control and steering by the use of thrusters and is also capable of providing small amounts of thrust in any desired direction or combination of directions. As per the defence ministry, the missile—which is propelled by a dual thrust solid motor—incorporates many novel technologies including miniaturised Reaction Control System (RCS) and integrated avionics, which were successfully proven during the tests conducted last year. The missile and its launcher were designed by the DRDO with portability in mind.

Designed and developed by:

About Serum Institute of India (SII):

What all SII produce including Vaccine?

The company started out to create immunobiologicals, which were expensively imported into India. Tetanus antitoxin, snake venom, the DPT vaccine, and the MMR vaccine were some of the first goods the Serum Institute of India produced in substantial quantities.

A number of immunisations against bacterial or viral illnesses, combination vaccines, influenza vaccines, and meningococcal vaccines were added to the company’s product lines. The company also produces antisera, blood plasma, and hormone products in addition to vaccines.

Some space travellers have agreements in place with other parties to carry out specific research tasks while in orbit. In 2007, it was anticipated that one of the first industries for commercial spaceflight would be astronomical tourism.

France team captain Hugo Lloris: France team captain Hugo Lloris has announced his decision to retire from international football at the age of 36. Lloris led Les Blues to the World Cup championship in 2018 and has played for France in four World Cups, three Euros, and three Euros. The Tottenham Hotspur shotstopper led his team to the World Cup final in Qatar, where they were beaten by Argentina on penalties.

Aim: To provide quick loans to micro and small businesses.

This development is at the backdrop of central government considering to make India a $5 trillion economy. South Indian Bank is facilitating MSME s to get instant funds. This initiative will help thousands of micro and small businesses avail loans quickly.

Charania is set to serve as principal advisor to Administrator Bill Nelson on technology policy and programmes at NASA headquarters. He will also ‘align NASA’s agency-wide technology investments with mission needs across six mission directorates and oversee technology collaboration with other federal agencies, the private sector, and external stakeholders,’ the space agency noted in a statement on Monday.

He joined the space agency in his new role on January 3, 2023. He has replaced Indian-American scientist, Bhavya Lal, who served as acting chief technologist prior to the former’s appointment. He has also served as vice president of product strategy at Reliable Robotics.

Who is AC Charania?

AC Charania received his bachelor’s and master’s degree in aerospace engineering from the Georgia Institute of Technology. He also holds a bachelor’s degree in economics from Emory University.

According to the press release by NASA, the Indian-American also served in multiple management and technology roles at SpaceWorks Enterprises, including helping to incubate two startups, Generation Orbit and Terminal Velocity Aerospace.