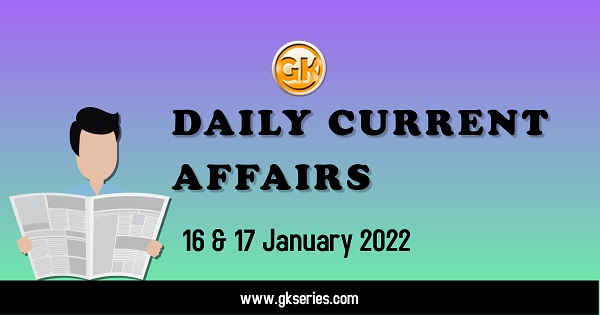 Current Affairs is the most important area in all competitive exams. But the difficulty level is very high. That’s why; many aspirants get confused, how to select Current Affairs for Preparation of Competitive Examination? In this Post, Daily Current Affairs 16 & 17 January 2022, we have tried to cover each and every point and also included all important facts from National/ International news that are useful for upcoming competitive examinations such as UPSC, SSC, Railway, State Govt. etc.

Our Research Vice President Neil Shah will be moderating a session at the 16th India Digital Summit on 11th January 2022. The event runs on the 11th and 12th of January. The two-day virtual event was organized by the Internet And Mobile Association of India (IAMAI). The theme of the summit was “Supercharging Startups”.

India Digital Summit is the oldest event of the digital industry in India. During the event, the Minister unveiled ‘LEAP’ as the way forward to further strengthen our Startups ecosystem. LEAP stands for “Leverage, Encourage, Access & Promote”.

The 20th Dhaka International Film Festival (DIFF) will take place between January 15-23 at multiple venues in Dhaka. The festival will showcase 225 films from 70 countries under 10 categories. The film festival is being organized in a hybrid mode with many films being streamed online during the festival. The DIFF will also organise the 8th edition of the ‘Women in Cinema’ international conference, as well as the 4th edition of the ‘West meets East’ screenplay lab during the festival.

History of the festival:

The Dhaka International Film Festival (DIFF) is organised by the Rainbow film Society established in 1977. The DIFF was started in 1992. The festival will have 10 sections including the Asian Competition Section, Retrospective, Tribute, Bangladesh panorama, Wide Angle, Cinema of the World, Children’s Film, Spiritual film, Women Filmmakers section and short and independent films.

Prime Minister Narendra Modi has declared to mark January 16 as ‘National Start-up Day’. Narendra Modi told a virtual gathering of over 150 entrepreneurs on Saturday as he termed startups as the “ backbone “ of new India and the engine that will power the nation’s economic growth in the run up to the 100 th year of Independence.

The announcement was made by PM Modi on January 15, 2022, via video conferencing during a week-long event “Celebrating Innovation Ecosystem” as a part of Azadi ka Amrit Mahotsav.

The Prime Minister interacted with more than 150 startups across different sectors, during the event.

Tasnim is at the top of the pile with 10,810 points. She hails from Mehsana, Gujarat.

Nicaragua President Daniel Ortega has been sworn in for a fourth consecutive 5 year term. The 76-year-old Nicaraguan politician is serving as President of Nicaragua since 2007.

Along with Ortega, the first lady Rosario Murillo was also sworn in for her second term as vice president.

World-renowned Kathak dancer Pandit Birju Maharaj passed away at his residence in Delhi on 16 January. The 83-year-old had reportedly suffered a heart attack. A recipient of the country’s second-highest civilian award, Padma Vibhushan, he was fondly called Pandit-ji or Maharaj-ji by his disciples and legions of followers and was one of India’s best-known artistes.

Birju Maharaj was a descendant of the Maharaj family of Kathak dancers, which includes his two uncles, Shambhu Maharaj and Lachhu Maharaj, and his father and guru, Acchan Maharaj. Birju Maharaj was also a singer par excellence, having command over Thumri, Dadra, Bhajan and Ghazal.

About the exercises: These exercises are aimed at enhancing interoperability, improving understanding and imbibing best practices between both the friendly navies, and this will involve advanced surface and anti-submarine warfare exercises, weapon firings, seamanship exercises and helicopter operations, Navy officials said, adding that these exercises are conducted regularly with units of friendly foreign navies, whilst visiting each other’s ports or during a rendezvous at sea.

Minister of State for Culture, Meenakashi Lekhi has launched the ‘North East on Wheels Expedition’ in New Delhi to promote the Culture of Northeastern States. The Bike Expedition is scheduled between 8th to 16th April this year to mark the celebrations of Azadi Ka Amrit Mahotsav.

75 Bikers participating in this expedition will be selected from all over the country and will cover about 9000 km in the North East Region in 6 groups. The expedition will also promote the Dekho Apna Desh initiative of the Ministry of Tourism. The Riders will also carry the message of the importance of Road Safety.

Beneficiary banks are the banks of the account holder who is receiving money. Paytm Payments Bank has also gained rapid traction as a remitter bank for UPI payments.

While State Bank of India (SBI) topped the chart of being the biggest remitter in December 2021, according to data released by the National Payments Corporation of India (NPCI). State Bank of India followed PPBL as the second-largest beneficiary with 664.89 million transactions.

Indifi Technologies has collaborated with Google Pay to provide instant loans to eligible small merchants on the Google Pay platform.

The borrowing process is entirely digital and eligible merchants on the Google Pay for the Business app can click on loan offerings from Indifi and submit an application online. The loans will be in the range of Rs 2.5 to Rs 3 lakh.

With a 35 per cent share of monthly UPI volumes, Google Pay has been growing its financial services play over the past year like other payments leaders in India. It already provides loans and short-term credit to individuals and small merchants in tie-ups with IIFL Loans, CASHe, and ZestMoney, among others.