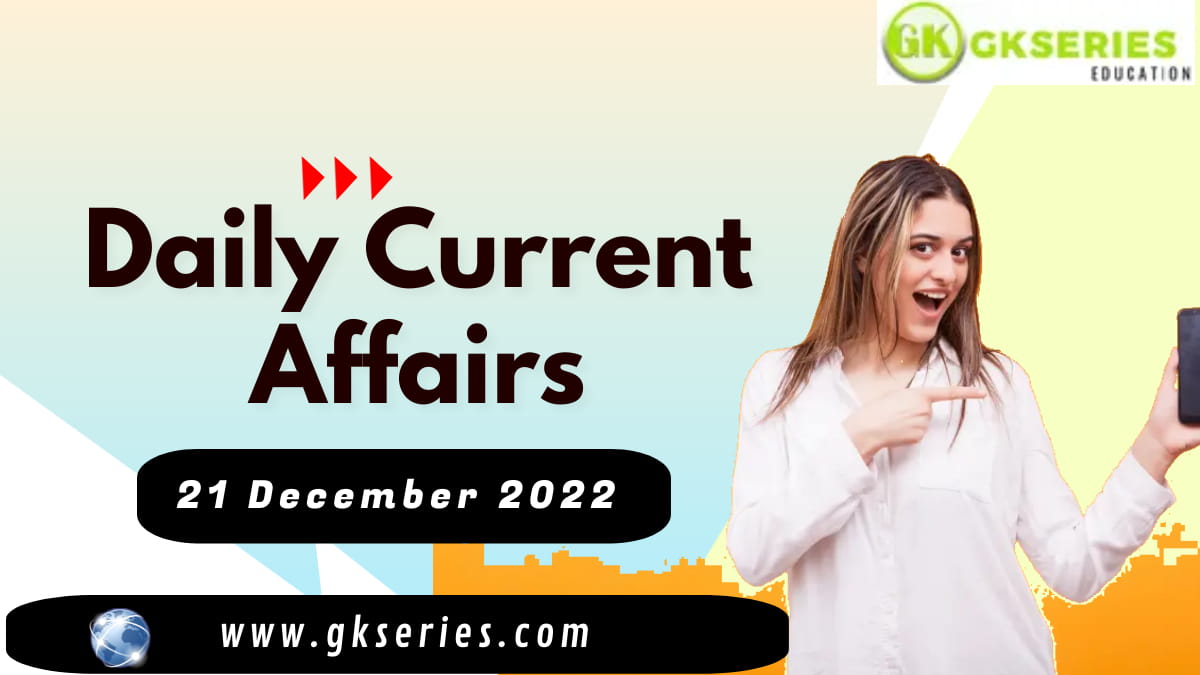 Current Affairs is the most important area in all competitive exams. But the difficulty level is very high. That’s why; many aspirants get confused, how to select Current Affairs for Preparation of Competitive Examination? In this Post, Daily Current Affairs 21 December 2022, we have tried to cover each and every point and also included all important facts from National/ International news that are useful for upcoming competitive examinations such as UPSC, SSC, Railway, State Govt. etc.

Earlier, the film has also received nominations in two categories for 2023 Golden Globes. The film has been nominated in the Best Picture – Non-English Language category and “Naatu Naatu” in the Best Original Song – Motion Picture category.

An order was issued by Finance Secretary N Muruganandam on December 15 stating that using Aadhaar verification will “simplify the government delivery process” and ensure efficiency and transparency. The order further stated that Aadhaar verification will enable beneficiaries to get their entitlements directly in a “convenient and seamless manner” by removing the need to provide multiple documents of proof. The order makes Aadhaar mandatory for government employees, government pensioners, and other beneficiaries of schemes introduced by the state government.

According to the order, the Aadhaar card is mandatory for government employees, government pensioners and beneficiaries of various schemes. The government has also announced remedial mechanisms if Aadhaar identification fails due to poor biometrics or any other reason.

FuelBuddy ties up with IOCL for doorstep delivery of automotive lubricants

The physical delivery of the lubricants will be done at their doorstep at the time of their convenience. The lubricants and greases market is a mix of steel, cement, power, mining, railroads, textiles, autos, and glass industries, as well as two and three-wheelers, agricultural equipment, stationary engines and marine.

R. Udayakumar, chief general manager, Lube Sales, IOCL, said, “With IOCL being a diversified, integrated energy major with its presence in almost all the streams of oil, gas, petrochemicals, and alternative energy sources, this association will be fruitful for both the organisations to responsibly deliver lubricants along with our existing partnership for fuel delivery to the consumers.“

Lance Naik Bhairon Singh Rathore, 1971 war hero, passes away: Bhairon Singh Rathore, a BSF veteran of the 1971 India-Pakistan conflict, passed away on Monday in Jodhpur at 81 yeas of age at the AIIMS in Jodhpur. He served in the 14th BSF unit during the war and retired from service in 1987. The BSF veteran’s bravery at Rajasthan’s Longewala post during the war was portrayed by actor Suniel Shetty in the Bollywood movie ‘Border’.

Rathore was stationed at the Longewala post in Jaisalmer’s Thar desert, where he was in charge of a tiny BSF unit of six to seven members and a 120-man company of the 23 Punjab regiment of the Army. On December 5, 1971, these men valiantly fought and annihilated an attacking Pakistani brigade and tank regiment in this area. He was awarded the Sena Medal in 1972 for his bravery. Bhairon Singh Rathore, a Naik who served in the 14th BSF unit during the conflict, retired from the military in 1987. When one of the 23 Punjabi youths was killed, according to BSF documents concerning the Longewala engagement, Lance Naik Bhairon Singh “took his light machine gun and inflicted significant damage on the approaching enemy.” Official records claim that Lance Naik Bhairon Singh “become a huge inspiration to his other comrades on the post” and that “it was only their courage and willingness to do or die that won the day.”

Gaya and Nalanda selected for development under Swadesh Darshan 2.0

Gaya and Nalanda selected for development under Swadesh Darshan 2.0: Union Tourism Minister G Kishan Reddy in response to a question in the Lok Sabha also said the Punaura Dham site in the Sitamarhi district of Bihar has been identified for development under the Pilgrimage Rejuvenation and Spiritual Heritage Augmentation Drive (PRASHAD) Scheme of the ministry.

The ministry under its Swadesh Darshan, PRASHAD and Assistance to Central Agency for Tourism Infrastructure Projects schemes provides support to state governments, Union Territory administrations and central agencies for the development of tourism infrastructure in the country, he said.

He has also informed that the Punaura Dham site in the Sitamarhi district of Bihar has been identified for development under the Pilgrimage Rejuvenation and Spiritual Heritage Augmentation Drive (PRASHAD) Scheme. The ministry has now revamped its Swadesh Darshan scheme as Swadesh Darshan 2.0.

Aim: To train crew onboard, in essential seamanship skills including Navigation, Communication, and Planning.

Digital India Awards 2022: The Ministry of Housing & Urban Affairs’ initiative “DataSmart Cities: Empowering Cities through Data” earned the Platinum Icon award in the Smart Cities Mission category of the Digital India Awards 2022. The award was announced under the ‘Data Sharing and Use for Socio-Economic Development’ category. The DataSmart Cities Initiative is a key step in creating a robust data ecosystem that enables evidence-based decision-making in cities.

What is DataSmart Cities Initiative?

The DataSmart Cities Initiative is a key step in creating a robust data ecosystem that enables evidence-based decision-making in cities. It aims to use data’s power for India’s 100 Smart Cities to improve government. Digital India Awards presents an opportunity to bring to the fore digital initiatives being adopted to transform India into a digitally empowered society and knowledge economy. It is a prestigious National competition that seeks to encourage and honour innovative digital solutions by government entities in realising the Digital India vision. Through 100 City Data Offices and more than 50 Data Policies, the programme has institutionalised a Data Ecosystem in cities.

The 100 Smart Cities now publish open datasets and contribute to data blogs and visualisations through the Smart Cities Open Data Portal, which has seen a transformation from zero to 1.2+ lakh downloads and 6 lakh visits. This initiative has led to generation of more than 180 innovative, scalable, and replicable use cases in collaboration with various stakeholders that are being utilized by cities for better functioning and citizen engagement vis.

About the Digital India Awards:

The Digital India awards instituted in 2009 are one of a kind in India for honouring the efforts of different Government entities in the digital realm. These are conducted by the National Informatics Centre (NIC) under the Ministry of Electronics & Information Technology (MeitY). In 2022, the seventh annual Digital India Awards (DIA) will take place.

Digital India Awards (DIA) presents an opportunity to bring to the fore digital initiatives being adopted to transform India into a digitally empowered society & knowledge economy. These awards are instituted under the aegis of National Portal of India to encourage and honour innovative digital solutions by government entities at all levels. DIA 2022 aims to inspire and motivate not only government entities but also start-ups in fulfilling the Digital India vision.

List of winners of Pro Kabaddi League till now:

The ‘Friends of Library’ programme: The ‘Friends of Library’ programme, under which books would be directly given to those who are unable to access state-run libraries, was introduced by the Tamil Nadu government. The project will benefit anyone who cannot visit a library, including those with disabilities, seniors, kids, and hospital in-patients. Volunteers will hand over the books to such people from the libraries.

About the ‘Friends of Library’ programme: