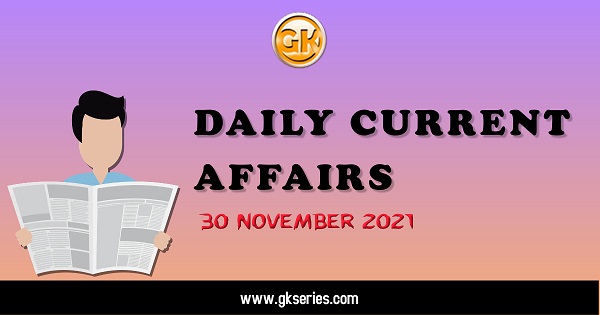 Petr Fiala has been sworn in as the Prime Minister of the Czech Republic by President Milos Zeman with effect from 28th November 2021. He is the chairman of the Civic Democrat party and head of the SPOLU (Together) alliance. He succeeded Andrej Babis.

Czech Republic is a landlocked country in Central Europe and is bordered by Austria to the south, Germany to the west, Poland to the northeast, and Slovakia to the east.

The Indian Railways is constructing the tallest pier railway bridge of the world in Manipur. The bridge is being constructed across river Ijai near Noney, and it will be the tallest pier with a height of 141 metres. Currently, the tallest pier bridge record is held by 139 metre high Mala-Rijeka viaduct built at Montenegro in Europe.

The ambitious project of the Railways in Manipur is part of the Jiribam-Imphal railway line, which ultimately is part of a new broad gauge line being constructed to connect the northeastern state with the rest of the country.

Security forces are deployed at the site, where a bridge of a total length of 703 metres is being constructed. Once completed, the project will enable passengers to cover 111 km of distance in 2-2.5 hrs.

Lingui, The Sacred Bonds – an internationally co-produced drama film recounting the story of the sacred relationship between a mother and daughter and their survival against the harsh laws set by men – won the ICFT-UNESCO Gandhi Medal at IFFI 52.

The ICFT-UNESCO Gandhi Medal award is given to the IFFI film that best reflects Mahatma Gandhi’s ideals of peace, tolerance and non-violence. The film is a bold portrayal of female struggle and a lesson in humanity. The film was co-produced by Belgium France Germany and was made in Arabic and French.

The film reflects the story of the sacred relationship between a mother and daughter and their survival against the harsh laws set by men.

Famous mountaineers of Uttarakhand Harshwanti Bisht has the distinction of being elected the first woman president of the Indian Mountaineering Foundation (IMF). 62-year-old Bisht secured 60 votes out of a total of 107 votes to be elected to the coveted post on 20 November. In 1981, Bisht scaled the Nanda Devi peak for which she was honored with the Arjuna award. The IMF was founded in the year 1958.

It is an apex national body to organize and support, mountaineering and rock climbing expeditions at high altitudes in the Himalayas.

The youth wing of the Indian Armed Forces and the largest uniformed youth organisation National Cadet Corps (NCC) has celebrated the 73rd anniversary of its raising on 28th November. NCC observes its Raising Day on the Fourth Sunday in November every year.

NCC is the largest uniformed youth organisation in the world. This day also marks the establishment of the armed forces through the Act of 1950.

Its headquarter is in New Delhi.

The American publishing company Merriam-Webster has declared an omnipresent truth as its 2021 word of the year: vaccine. Merriam-Webster is America’s most trusted online dictionary for English word definitions, meanings, and pronunciation.

It has been declaring the word of the year since 2008.

The government has appointed senior bureaucrat Vivek Johri as the Chairman of the Central Board of Indirect Taxes and Customs (CBIC), with effect from 30th November 2021.

He is a 1985-batch IRS (Customs and Indirect Taxes) officer and is currently working as a member in CBIC. He succeeded M Ajit Kumar, who will complete his tenure on 30th November 2021. CBIC is the nodal national agency responsible for administering Customs, GST, Central Excise, Service Tax & Narcotics in India.

The 7th edition of the India International Science Festival (IISF) 2021 will be held in Panaji, Goa. The 7th IISF Festival will be organized for four days from 10th December to 13th December 2021.

Organized by: Ministry of Earth Sciences, Ministry of Science and Technology, Dept of Atomic Energy, Department of Space and Govt of Goa

More than 100 scientists from different fields will participate. The theme will be based on Aazadi Ka Amrit Mahotsav with motto of Celebration of science and its promotion.

Union Ministry of Skill Development and Entrepreneurship has launched two pilot projects with a view to revive and catalyze the traditional Namda Craft and upskill the Artisans and Weavers of Kashmir.

‘Revival of Namda craft of Kashmir’ as a special pilot project under Pradhan Mantri Kaushal Vikas Yojana 3.0. Upskilling of artisans and weavers of Kashmir under Recognition of Prior Learning component of PMKVY

Aim: to boost and preserve the traditional Namda craft of Kashmir and upskill the local weavers and artisans

Namda craft is a rug made of sheep wool through felting technique.

An UN-backed project to develop a floating city has been proposed for the seas off Busan in South Korea to pioneer a new mode of living amid climate-related sea-level rises. The floating city project is a joint effort by the UN Human Settlement Programme (UN-Habit) and OCEANIX.

The city will be built off the coast of Busan in South Korea and is likely be completed by 2025.

The floating city will have ‘flood-proof infrastructure’ and comprise several man-made islands to eliminate the risk of flooding. Although the size of the city’s first iteration has not been determined, the cost is expected to be in the region of $200m.

The self-sufficient city will be specifically designed to withstand natural disasters like tsunamis, floods, and Category 5 hurricanes.

The day marks tribute to the victims of chemical warfare, as well as to reaffirm the commitment of the Organisation for the Prohibition of Chemical Weapons (OPCW) to the elimination of the threat of chemical weapons, thereby promoting the goals of peace, security, and multilateralism.