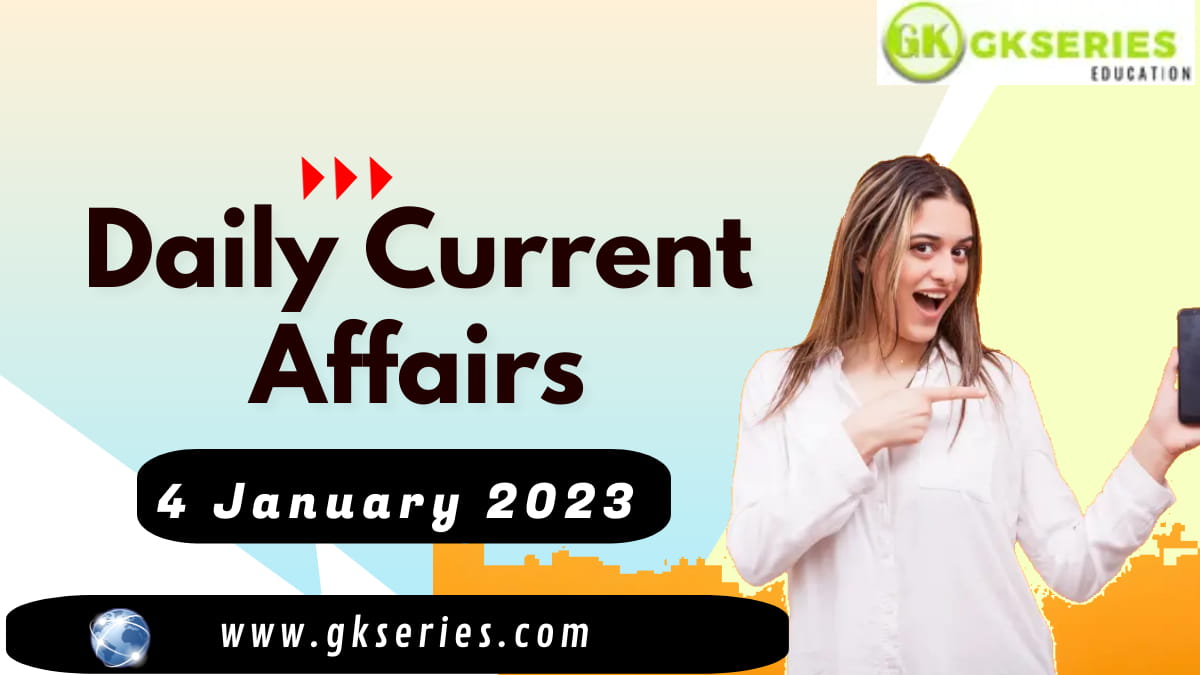 Current Affairs is the most important area in all competitive exams. But the difficulty level is very high. That’s why; many aspirants get confused, how to select Current Affairs for Preparation of Competitive Examination? In this Post, Daily Current Affairs 4 January 2023, we have tried to cover each and every point and also included all important facts from National/ International news that are useful for upcoming competitive examinations such as UPSC, SSC, Railway, State Govt. etc.

World Braille Day 2023: World Braille Day, marked on January 4, emphasizes the significance of Braille as a form of communication for the partially sighted and blind. Since 2019, the United Nations has observed the day. Louis Braille was born on January 4, 1809, which is also celebrated on World Braille Day. After losing his sight during childhood, the French educator devised the Braille technique.

The purpose of the day is to raise awareness of the braille language, which attempts to bridge the gap among normal and differently-abled individuals. Coupvray, France, gave birth to the creator of an extensively adopted touch device enabling blind persons to read and write. Braille created a system of writing that employed, paradoxically, an awl-like instrument to punch symbols on a sheet that can be sensed and read by blind people after himself being irreparably blinded at the age of three in his father’s saddle-making factory. Until Braille’s untimely death from illness on January 6, 1852, in Paris, the technique was generally neglected. In a declaration released in 2018, the UN recognised January 4th to be World Braille Day.

Braille is a tactile representation of musical, mathematical, and scientific symbols as well as alphabetic and numerical symbols using six dots for each letter and number. Braille (named after its inventor in 19th century France, Louis Braille) is used by blind and partially sighted people to read the same books and periodicals as those printed in a visual font.

Braille is essential in the context of education, freedom of expression and opinion, as well as social inclusion, as reflected in article 2 of the Convention on the Rights of Persons with Disabilities.

Captain Shiva Chauhan: Captain Shiva Chauhan from the Corps of Engineers has been posted at a frontline post in Siachen Glacier, in first such operational deployment of an woman Army officer at the world’s highest battlefield. The officer was posted at the Kumar post, located at an altitude of around 15,600 feet in Siachen, on Monday for a three-month stint after she underwent rigorous training. The training included endurance training, ice wall climbing, avalanche and crevasse rescue and survival drills.

Who is Capt Shiva Chouhan?

Capt Shiva Chouhan, who hails from Rajasthan, is a Bengal Sapper Officer. Chouhan lost her father at the age of 11 and her mother, a housewife, took care of her studies. She did her schooling from Udaipur and graduated from NJR Institute of Technology, Udaipur, in civil engineering. Covering a distance of 508 kms, Capt Chouhan successfully led the Sura Soi Cycling Expedition from Siachen War Memorial to Kargil War Memorial conducted on the occasion of Kargil Vijay Diwas in July 2022. She then accepted the responsibility of commanding the Sura Soi Engineer Regiment’s soldiers at Siachen, and as a result of her success, she was chosen to attend the Siachen Battle School for training.

About the Siachen Glacier:

The Siachen glacier lies in the Karakoram Range .It is 75 km (47 miles) long, which makes it the second longest nonpolar glacier in the world, after Fedchenko Glacier in Tajikistan.

Operation Meghdoot was launched by the Indian Armed Forces to take control of Siachen Glacier on the morning of April 13, 1984 before the Pakistani army did so. The Siachen Glacier, which is now in the Union Territory of Ladakh, was once located in the State of Jammu and Kashmir.

Is The Unemployment Data a Worrisome Case:

The unemployment rate in the northern state of Haryana increased to 37.4% in December, while it was 28.5% in Rajasthan and 20.8% in Delhi.

What is Labor Force Participation Rate:

Labor Force Participation Rate (LFPR) is known as the section of the working population in the age group of 16-64 in the economy currently employed or either seeking employment.

Author Manu S. Pillai on his new book, The World: A Family History

The World: A Family History of Humanity: British historian Simon Sebag Montefiore spoke with Indian historian Manu S. Pillai about his most recent book, “The World: A Family History of Humanity.” In the book, Simon Sebag Montefiore explores how people and families have played a role in the convergences and divergences in world history. The two-part book’s first edition was released on October 27, 2022, by Hachette India. The award-winning books by international best-selling novelist Montefiore have been translated into 48 different languages.

Both book, published by Hachette India, claims to capture the story of humankind in “a ground-breaking, single narrative that will forever shift the boundaries of what history can achieve”. Beginning with the footsteps of a family walking along a beach 9,50,000 years ago, Montefiore takes the readers on an epic journey through the families that have shaped the world, including the Caesars, Medicis, Incas, Ottomans, Mughals, Bonapartes, Habsburgs, Zulus, Rothschilds, Rockefellers, Krupps and Churchills.

Noted Rabindra Sangeet exponent Sumitra Sen passes away at 89: Sumitra Sen, a well-known Rabindra Sangeet performer, died at the age of 89. She will be remembered for her rendition of songs like Jokhon Porbe Na Mor, Sokhi Vabona Kahare Bole and Mone Ki Dwidha. Her rendition of Aaj Jyotsna Raate Shobai Gechhe Bone in Ritwik Ghatak’s classic movie Komal Gandhar has remained a steadfast interpretation of the song. In 2012, she received the Sangeet Mahasamman award from the West Bengal government.

About the Rabindra Sangeet:

Rabindranath Tagore, a Bengali polymath and recipient of the 1913 Nobel Prize in Literature, wrote and produced songs from the Indian subcontinent known as Rabindra Sangeet, sometimes referred to as Tagore Songs. Rabindra Sangeet refers to the 2000 plus songs and poetry of love and devotion composed by Tagore. Out of these only 730 songs for which the bard had written the notations are currently sung. These songs are regarded as cultural treasures of Bengal in both West Bengal and the predominantly Muslim Bangladesh.

BCCI Announced Yo-Yo Test and Dexa to be a Part of India Selection Criteria: The Board of Control for Cricket in India (BCCI) announced that Yo-Yo Test and Dexa will be a part of the selection criteria. In addition to discussing the schedule for the ICC Cricket World Cup 2023, BCCI also covered the players’ availability, workload management, and fitness standards. ICC Cricket World Cup is scheduled in October and November, and it is to be hosted by India.

BCCI has shortlisted 20 players who will be rotated for proper preparations for the ODI World Cup 2023. The BCCI will give preference for international cricket while making sure the IPL is not diluted.

The National Cricket Academy (NCA) will collaborate with the IPL franchisees to track the targeted Indian players competing in the IPL 2023 as part of the Men’s FTP and ICC CWC preparations. The emerging players will have to play a substantial domestic season to be eligible for selection to the National team. The meeting was held ahead of the white-ball series against Sri Lanka, which begins on 3rd January 2023 in Mumbai.

Breaking Barriers: the Story of a Dalit Chief Secretary- “Breaking Barriers: the Story of a Dalit Chief Secretary,” written by former IAS officer Kaki Madhava Rao, covers a knowledge gap about micropolicies and governance while also addressing specifics about the dynamics of the civil service on the ground. The book is published by Emesco Books Private Limited. K Madhava Rao is a 1962 batch Indian Administrative Service (IAS) officer, who retired as Chief Secretary of Andhra Pradesh (AP). He was born in Pedamaddali village of Krishna district, AP in 1939. He also served in the Reserve Bank of India(RBI) as a Director and as a member of a sub-committee, the Board for Financial Supervision.

The essence of the book is best encapsulated in the first chapter, “Village Days.” Chapters 2,3,4, and 5 are full of details on his exposure to the national stage, a different world from rural Andhra Pradesh. The account here is of how a provincial young man matures into an adult in the world at large.

The socio-political dimensions of administration, notably at the state and decentralised levels, are widely covered in Chapters 6, 7, 8, and 9. The pulls and pressures, politics and economics, formal and informal aspects of the administration, are all captured here. Chapters 10 and 11 deal with the political economy of the country in which politics and economics overlap significantly. NT Rama Rao, N Chandrababu Naidu, Chenna Reddy, Vijaya Bhaskar Reddy, N Janardhan Reddy, and other influential figures are among those who are mentioned in these exchanges.

Defence Research and Development Organisation (DRDO): The 65th anniversary of the organization’s foundation day, which is observed annually on January 1st, was commemorated at the DRDO Headquarters in New Delhi. DRDO Chairman Dr S V Kamat addressed the DRDO fraternity on the occasion. He reaffirmed DRDO’s commitment towards R&D excellence and briefed about the development of cutting edge technologies for self-reliance in defence.

A DRDO monograph written by Dr. Kamal Nain Chopra, a former DRDO scientist, and titled “Infrared Signatures, Sensors and Technologies” was also released by the Chairman DRDO on the occasion of the day.DRDO calendar 2023 was also released. In addition, Secretary DD R&D and Chairman DRDO felicitated all the employees who have completed 25 years of their service in DRDO.

About the Defence Research and Development Organisation (DRDO):

‘SMART’ program for Ayurveda professionals launched to regulate and boost R&D in Ayurveda“: The National Commission for Indian System of Medicine (NCISM) and the Central Council for Research in Ayurvedic Sciences (CCRAS), the two prominent institutions under the Ministry of Ayush, Government of India for regulating medical education and conducting scientific research respectively, have launched ‘SMART’ (Scope for Mainstreaming Ayurveda Research in Teaching Professionals). Through Ayurveda colleges and hospitals, the programme aimed to promote scientific research in key healthcare research fields.

Qin Gang Appointed As China’s New and Youngest Foreign Minister: China has appointed Qin Gang, its ambassador to the United States and a trusted aide of President Xi Jinping, to be its new foreign minister, as Beijing and Washington seek to stabilize rocky relations.This decision was made by the 13th National People’s Congress (NPC) Standing Committee. Qin, 56, replaces Wang Yi, who has been foreign minister for the past decade. Wang, 69, was promoted to the politburo of the Chinese Communist Party and is expected to play a bigger role in Chinese foreign policy.

Qin Gang And His Erstwhile Positions:

Qin rose quickly through various positions in China’s foreign ministry, including two stints as ministry spokesman between 2006 and 2014, and as chief protocol officer between 2014 and 2018, overseeing many of Xi’s interactions with foreign leaders. As spokesman, he stood out among his peers for being one of the earliest Chinese diplomats to make sharp comments in defence of China’s increasingly assertive foreign policy, what later became known as “wolf warrior” diplomacy.

Qin Gang And His World View: