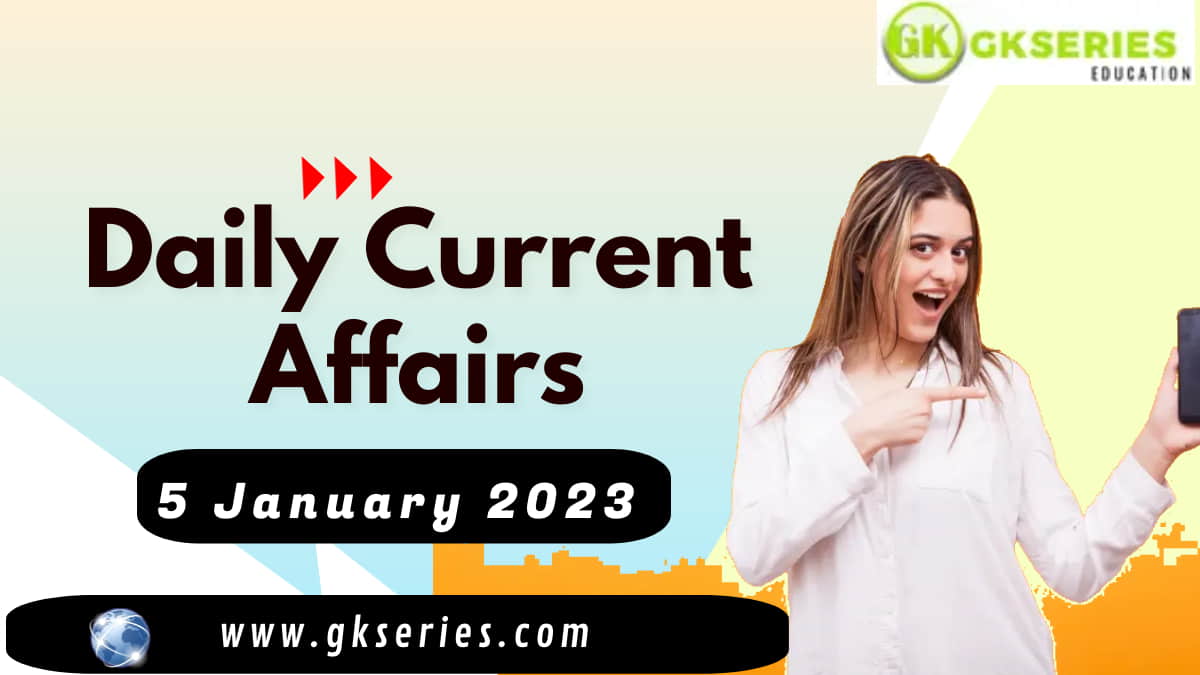 Current Affairs is the most important area in all competitive exams. But the difficulty level is very high. That’s why; many aspirants get confused, how to select Current Affairs for Preparation of Competitive Examination? In this Post, Daily Current Affairs 5 January 2023, we have tried to cover each and every point and also included all important facts from National/ International news that are useful for upcoming competitive examinations such as UPSC, SSC, Railway, State Govt. etc.

Dr. Satish Dhawan: Dr. Satish Dhawan, an Indian mathematician and aeronautical engineer who lived from 25 September 1920 to 3 January 2002, was widely hailed as the “father of experimental fluid dynamics research in India.” Born in Srinagar, Dhawan was educated in India and further on in United States. Dhawan was one of the most eminent researchers in the field of turbulence and boundary layers, leading the successful and indigenous development of the Indian space programme. In 1972, he took over as the third chairman of the Indian Space Research Organization (ISRO), succeeding M. G. K. Menon.

APJ Abdul Kalam explained that in 1979 when he was the director of a Satellite Launch Vehicle, the mission failed to launch the satellite in the orbit. Instead, it was put into Bay of Bengal. Abdul Kalam’s team knew that there was a leakage in the fuel of the system, but they hoped that the leakage was negligible, and thus they thought there was enough fuel in the system. This miscalculation lead to the failure. Satish Dhawan, being the chairman at the time, called Abdul Kalam and conveyed to the press; “We failed! But I have very strong trust in my team and I believe that next time we will definitely succeed”. Abdul Kalam was astonished by this because the chairman of ISRO accepted responsibility for the disaster. In 1980, the following mission was prepared for and launched successfully. When this succeeded, Satish Dhawan told Abdul Kalam to attend the press meet without his presence. It was observed that when the team failed, he took the blame. But when the team succeeded, he attributed the success to his team, thus portraying the picture of an ideal leader.

On January 3, 2002, Dhawan passed away in Bangalore. After his passing, the Satish Dhawan Space Centre was given as the new name for the satellite launch facility in Sriharikota, Andhra Pradesh, which is roughly 100 kilometres north of Chennai in South India. Satish Chander Dhawan Government College For Boys in Ludhiana is named after him. Department of Mechanical Engineering Building at Indian Institute of Technology Ropar is also named after him as Satish Dhawan Block, IIT Ropar. The Computer Centre of Uttar Pradesh Textile Technology Institute Kanpur is also named as Prof Satish Dhawan Computer Centre in year 2019.

Satish Dhawan was born on 25 September 1920 in Srinagar in the state of Jammu and Kashmir, India, in a Saraiki Hindu family. His father came from Dera Ismail Khan, and Satish Dhawan grew up in Lahore and Kashmir. He was married to Nalini Dhawan, a cytogeneticist, and his daughter Jyotsna Dhawan is serving as Senior Principal Scientist in the Centre for Cellular and Molecular Biology.

Jason Moo appointed as CEO of Bank of Singapore

Bank of Singapore: Oversea-Chinese Banking Corporation (OCBC) subsidiary Bank of Singapore (BoS) has announced the appointment of Jason Moo as its new CEO. Following an article from Bloomberg on December 26, 2022, BoS made an announcement. Moo will succeed Bahren Shaari officially from March 6 onwards.

Past career of Jason Moo:

Moo comes with over 25 years of experience in private banking, wealth management and capital markets. This includes time spent in New York, Hong Kong, and Singapore in addition to 22 years with Goldman Sachs. Moo served as the CEO of Goldman Sachs from 2017 until 2019. (Singapore). Moo joins BoS from Julius Baer where he was head of private banking, Southeast Asia and branch manager Singapore. Aside from Singapore, he has also worked in New York and Hong Kong. Shaari was appointed CEO in 2015. Under his leadership, the bank successfully integrated Barclays Asia after the acquisition, and grew its assets under management from US$55 billion to US$109 billion as at September 30 2022.

The Bank of Singapore

The private banking division of OCBC Bank is called The Bank of Singapore. It was formerly known as ING Asia Private Bank, and OCBC Bank purchased it from ING Group in 2009 for US$1.46 billion. As of 30 September 2022, Bank of Singapore’s assets under management was US$109 billion.  The Bank of Singapore serves high net worth individuals and wealthy families in its key markets of Asia, Greater China, the Indian subcontinent and other international markets.

RBI Survey for Price Movements, Inflation Assessment Launched: The Reserve Bank of India has launched the Inflation Expectations Survey of Households (IESH) which will provide useful inputs for monetary policy. The survey will be conducted in 19 cities in the January 2023 round. It aims to capture subjective assessments of price movements and inflation, based on individual consumption baskets.

Places Where It Will Be Conducted:

Through Which It Will Be Conducted:

The agency — Hansa Research Group, Mumbai — has been engaged to conduct the survey of this round on behalf of the ventral bank.

How The Survey Will Be Conducted:

Significance of The Survey:

About The Previous Survey:

The September 2022 round of Inflation Expectations Survey of Households (IESH) aims at capturing subjective assessments on price movements and inflation, based on their individual consumption baskets, across 19 cities.

Election Commission appointed Maithili Thakur as Bihar’s state icon: The Election Commission named Maithili Thakur, a folk musician, as the state symbol for Bihar. Voters will become more aware of the need of participating in the electoral process thanks to the singer. This recognition will give her (Maithili) more impetus to spread Bihar’s folk music across continents and generate awareness about the importance of participating in the electoral process.

About the Maithili Thakur:

Their father and grandparents taught Maithili, who was born in the Madhubani district of Bihar, as well as her two brothers, folk, tabla, harmonium, and Hindustani classical music. She has rendered traditional folk songs of Bihar in Maithili, Bhojpuri and Hindi. Thakur, trained in Indian classical and folk music, was recently selected for the Ustad Bismillah Khan Yuva Puraskar of the Sangeet Natak Akademi for her contribution to the folk music of Bihar for 2021.

It is a custom to produce new fire by rubbing dry wood and split bamboo pieces and distributing them to every household on the day of the festival to mark the beginning of the new year.

It is a post-harvest festival known as Gaan Ngai. It is mainly performed by the followers and devotees of the Zeliangrong Indigenous religion of ‘Poupei Chapriak’ and ‘Heraka’.

Gaan Ngai is traditionally celebrated in the month of ‘Gaan-Bu’ of the indigenous calendar of the Rongmei Naga tribe which typically falls in the Gregorian month of November or December. Assam celebrates Gaan Ngai on the day determined by the local Rongmei Naga Calendar. In Manipur, Gaan Ngai is celebrated on the 13th day of the Manipur month of “Wakching” of the Meetei Manipur Calendar with the festival being a state holiday in Manipur.

HDFC Bank collaborates with Microsoft as part of its digital transformation

HDFC Bank collaborates with Microsoft as part of its digital transformation : HDFC Bank, India’s largest private sector bank, is partnering with Microsoft in the next phase of its digital transformation journey and unlocking business value by transforming the application portfolio, modernizing the data landscape and securing the enterprise with Microsoft Cloud. As part of its Future Ready strategy, HDFC Bank is working to co-create technical intellectual property with a number of businesses, including FinTechs. HDFC Bank as a part of its Future Ready strategy is developing in house IPs as well as partnering with several companies including FinTechs’ to co -create technology IPs.

The bank will leverage Microsoft Azure to consolidate and modernize its enterprise data landscape through a Federated Data Lake to scale its information management capabilities across enterprise reporting, and advanced analytics using artificial intelligence. Built on Microsoft Azure stack, the solution will enable the bank to democratize and monetize its data landscape catering to several business units, spanning multiple systems, reports and processes. The solution powered by its unified architecture, collaborative engineering environment, industry-leading security and ecosystem of AI/ML based deep learning capabilities.

China Becomes First Country in Asia to Launch Hydrogen Powered Train: China’s CRRC Corporation Ltd. Launched a hydrogen urban train, and it is the first in Asia and the second such train in the world. Germany introduced green trains a few months back. The hydrogen trains have a speed of 160 km per hour and the operational range without refueling is 600 km.

The 1175 km range of the trains that Germany debuted is a record. The Indian Railway on the other hand is moving fast to induct the ‘World’s Greenest Train’ soon.

By December 2023, India will have its first indigenous hydrogen trains. Railway Minister Ashwini Vaishnav informed that Indian Railways is working on new environment-friendly trains and the engineers are designing them.

Germany became the first nation to run a fleet of passenger trains fueled by hydrogen. The German government has informed that 15 diesel trains will be replaced.

These trains were previously being operated on tracks that lacked electric supply in Lower Saxony, Germany. The fleet comprises 14 trains, which use fuel cells to generate power, making it the cleanest-greenest train fleet ever.

FAME India Phase II scheme: With assistance from the Ministry of Heavy Industries’ FAME India Phase II programme, 50 electric buses were introduced in Delhi. In 2019, the government approved Rs 10,000 crore for a period of three years. Out of total budgetary support, about 86 percent of the fund has been allocated for incentives so as to create demand for electric vehicles. Electric Vehicles are vehicles that are partially or fully powered on electric power. They have low running costs and are also very environmentally friendly as they use little or no fossil fuels (petrol or diesel). These vehicles can solve the problems of increasing pollution, global warming, depleting natural resources etc.

BharatPe appoints Nalin Negi as interim CEO: The chief executive of digital payments startup BharatPe, Suhail Sameer, will transition from his current role and become a strategic advisor to the company, effective January 7. Its chief financial officer (CFO) Nalin Negi, who was brought in from SBI Cards in August, will be the interim CEO, the company said in a statement on Tuesday.

The troubled startup’s board of directors has retained a leading executive search firm to assist with succession planning and search for a new CEO.

Negi has previously worked at GE Capital and SBI Card. He was the CFO of SBI Card for over ten years. BharatPe was founded in March 2018.

Bandhan Bank launched ‘Jahaan Bandhan, Wahaan Trust’ campaign: Bandhan Bank has launched its integrated marketing campaign featuring its brand ambassador, cricketing legend Sourav Ganguly. The ‘Jahaan Bandhan, Wahaan Trust’ campaign emphasises the ‘trust’ that the brand has been able to earn in a span of seven years as a Bank and over the last two decades in the various avatars prior to the Bank.

The campaign was conceptualised by Leo Burnett Orchard. Bandhan was constituted in 2001 as a not-for-profit entity. The RBI had accorded ‘universal banking licence’, following which the Bank has started operating on August 23, 2015.

Objective: To bring in financial inclusion and women empowerment.