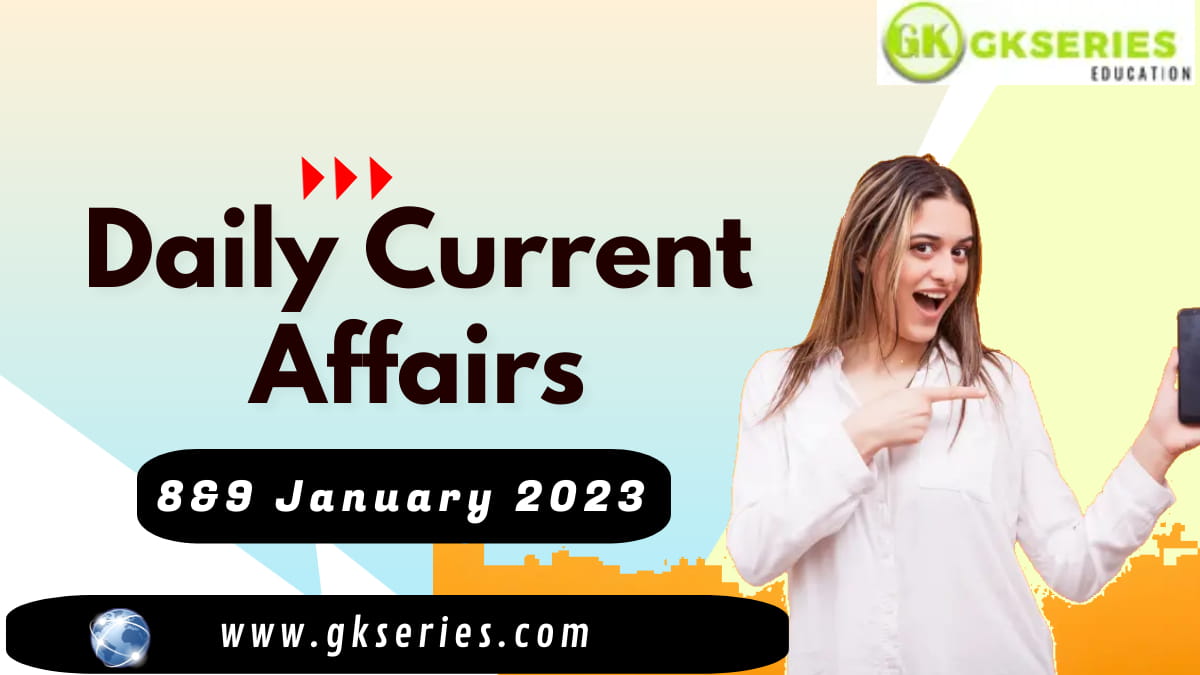 Current Affairs is the most important area in all competitive exams. But the difficulty level is very high. That’s why; many aspirants get confused, how to select Current Affairs for Preparation of Competitive Examination? In this Post, Daily Current Affairs 8&9 January 2023, we have tried to cover each and every point and also included all important facts from National/ International news that are useful for upcoming competitive examinations such as UPSC, SSC, Railway, State Govt. etc.

Power Grid Ranked 1st in Services Sector in PE Survey 2021-22: In the areas of Gross Block, Value Addition, Net Profit, Net Worth, Dividend Declaration, and Contribution to the Central Exchequer, Power Grid Corporation of India Limited (POWERGRID) was placed first in the services sector. It was also ranked third among the Top 10 profit-making Closes. The results were published in the Public Enterprises Survey 2021-2022 by the Department of Public Enterprises (DPE), Ministry of Finance, Government of India.

About Powergrid Corporation of India Ltd

Powergrid Corporation of India Ltd is an Indian Central public sector under the ownership of the Ministry of Power, Government of India. It is engaged in the transmission of bulk power across different states of India. Gurugram is home to POWERGRID’s corporate headquarters. In India, the power grid transmits around 50% of all the power.

The Power Grid Corporation Ltd was incorporated on 23rd October 1989 under the Companies Act 1956. The original name of POWERGRID was “National Power Transmission Corporation Limited”.

According to the Ministry of External Affairs, the official theme of the Pravasi Bharatiya Divas 2023 is “Diaspora: Reliable Partners for India’s Progress in Amrit Kaal.” The theme is the contribution of the Indian diaspora to the growth of the nation. It is important to note that every year a new theme is chosen to celebrate the day.

Another goal of the organisation is to establish a network of Indians living abroad in 110 different nations. educating the general public on the contribution that immigrants have made to India’s positive international relations. establishing a link between the rising Indian generation and the immigrant brethren. to talk about the challenges that Indian workers encounter when working abroad.

The historical background of Pravasi Bharatiya Divas can be followed back to 2000 when the Public Authority of India chose to celebrate 9th January as a day for the NRI people group. The meaning of 9th January as NRI Day comes from the way that Mahatma Gandhi got back to India from South Africa on this day in 1915.

After this day was administered in 2000, it was first celebrated in 2003. Here are more insights concerning the historical backdrop of Pravasi Bharatiya Divas – The Pravasi Bhartiya Divas date is the 9th of January. Most people celebrated this as NRI Day in India. NRI Day and pravasi Bhartiya divas is the same thing.

CJI DY Chandrachud to be Conferred with “Award for Global Leadership”

CJI DY Chandrachud to be Conferred with “Award for Global Leadership”: The Harvard Law School Center on the Legal Profession (HLS CLP) has announced Chief Justice of India Dr. DY Chandrachud as the 2022 recipient of its “Award for Global Leadership” in recognition of his lifetime service to the legal profession in India and across the world. On January 11, 2023, he will receive the honour at a virtual ceremony.

Dhananjaya Yashwant Chandrachud is an Indian judge who is currently serving as the 50th Chief Justice of India. He is the former ex-officio executive chairman of the National Legal Services Authority while being J1 of the Supreme court of India. He is also the former chief justice of Allahabad Highcourt and former judge of Bombay High Court.

Forex Reserves at $562.9 bn; Fall by $70 bn in 2022: India’s foreign exchange reserves fell by $70.1 billion in 2022, data released by the Reserve Bank of India (RBI) shows. In the week ending December 30, the foreign exchange reserves were $562.9 billion. The RBI’s intervention in the currency markets to combat volatility and the depreciation of other important currencies that the central bank holds are both contributing factors to the fall in foreign exchange reserves. The RBI net sold $33.42 billion till September, Union finance minister Nirmala Sitharaman said. The RBI holds major currencies including pound sterling, yen and euro in its reserves, which are expressed in US dollar terms.

Fall of The Rupee Through-out the Year:

By September 2021, forex reserves had reached a peak of $642.5 billion, before dropping to a low of $631.5 billion by the end of February 2022, when the conflict between Ukraine and Russia broke out. RBI had said that FX reserves of $564.1 billion as on December 9 are equivalent to 9.2 months worth of imports, lower than the projected 15 months of imports at the peak levels.

With the US Federal Reserve retaining a hawkish stance on interest rates, the rupee might breach 83 levels, according to analysts. On the trade front, the rupee will continue to be under pressure from imports of crude oil and other commodities.

Despite its slide, the rupee has been more resilient compared to its peers in other emerging markets due to RBI intervention. However, it has come at the cost of significant depletion in the foreign exchange reserves. According to reports, the foreign reserves slightly increased by $44 million over the week ending December 30. The increase was mainly due to increase in the gold reserves of $354 million, which was offset by decline of $302 million in the foreign currency assets. The RBI held 785.35 metric tonne of gold as of September 30.

Keshari Nath Tripathi: Keshari Nath Tripathi, a prominent member of the Bharatiya Janata Party (BJP) and a former governor of West Bengal, died at the age of 88. Tripathi, who was also a senior attorney at the Allahabad High Court, was born on November 10, 1934, in the former city of Allahabad. He joined RSS when he was just 12 and later switched to Bharatiya Jana Sangh. He was jailed in Naini Central Jail in 1953 for participating in the ‘Kashmir Andolan’ and again in 1990 for taking part in the Ram Janmabhoomi movement.

About the Keshari Nath Tripathi:

In the Rajasthani region of Bikaner, close to the village of Banderwala, 500 acres are being used for the solar power project. It is one of the highest solar yield areas in India.

Kerala Becomes Country’s First Fully Digital Banking State: Chief Minister Pinarayi Vijayan declared Kerala as the first state in the country to go fully digital in its banking service and said this recognition would boost the state economy. Vijayan said this achievement was possible due to social interventions through local self-government institutions along with infrastructure development and technological advances in the banking sector.

It is a joint venture between the state, Kerala State Electricity Board, and the Kerala State Information Technology Infrastructure Ltd. (KSITIL), with the state owning the remaining 2% and the two corporations holding 49% each. A consortium led by Bharat Electronics Ltd (BEL) is executing the project and will be responsible for the operation and maintenance of the 35,000-km-long network for the next seven years. Funded by the Kerala Infrastructure Investment Fund Board (KIIFB), the project is estimated to cost Rs 1,028.20 crore, which includes capital expenditure, administrative overheads and annual operational expenditure of Rs 104.4 crore.

Everyone in the state will have access to the internet thanks to the K-FON, and an optic fibre network measuring 17,155 km has been installed. Once the project gets completed, internet will be available to everyone in the state either for a cheaper price or for free-of-cost.

Kerala’s the right to Internet:

Kerala is the only State in India that has declared ‘the right to Internet’ as a basic right of its citizens. Rights become meaningful only when they can be exercised. The Kerala Fibre Optic Network project is our attempt to ensure that all Keralites can enjoy Internet-based services as a right. It is our effort to bridge the digital divide.

Since making his international debut, Suryakumar Yadav has rapidly advanced to become one of the white ball format’s most dependable and consistent batters. The multi-dimensional batter is popularly known as “Mr. 360 degree” for his wide array of shots covering every inch of the field. His 360 degree playing style and his traits of dependability and consistency have a seamless fit with the values of ICICI Prudential Life Insurance which customers depend on. The Company also provides a 360 degree financial protection against any unfortunate event, critical illnesses, and accidents.

HIGHLIGHTS OF THE SUMMIT:- Anurag Singh Thakur, Union Minister for Youth Affairs and Sports, introduced the Y20 Summit’s themes, logo, and website at the curtain-raiser ceremony for the Y20 Summit India in New Delhi. India is hosting the Y20 summit for the first time. Panel Discussion on “How India can harness its youth population to be a superpower” was also held in the second session of today’s event.

Anurag Thakur also spoke about the Themes of Y20 i.e.

For India, the G20 Presidency also heralds the start of “Amritkaal,” the 25-year period starting from the country’s 75th anniversary of independence on 15 August 2022 and ending with its 100th anniversary of independence. During this time, India will work to create a futuristic, prosperous, inclusive, and developed society that is distinguished by a human-centric approach at its core. India is playing a significant role in finding workable solutions at the international level to ensure holistic well-being embodying the idea of Vasudhaiva Kutumbakam.

The Y20 is the G20’s (Group of 20) official youth engagement group. The G20 is a forum for the biggest and most developed economies in the world. The Y20 is a process which brings together young leaders from across the globe, to discuss and debate global challenges and agree policy recommendations they would like to see G20 leaders take forward.

The list of policy recommendations is known as a communiqué, which is announced publicly at the Y20 Summit and presented to world leaders as part of the official G20 summit. India is hosting the Y20 summit for the first time.

India’s main goal in the Youth 20 Engagement Group is to gather young leaders from all across the world to explore concepts for a better future and create an action plan. The activities to be undertaken by Y20 during India’s presidency will focus on global youth leadership and partnership. In a run-up to the final Youth-20 Summit, for the next eight months, there will be Pre summits on the five Y20 themes along with various discussions and seminars at different Universities across the country.

Tropical Cyclones in the Indian Seas:

Other than Tropical Cyclones, various parts of the country also experienced Extreme Weather Events like extremely heavy rainfall, landslide, lightning, thunderstorm, etc. There was also significant flooding in India at various stages during the monsoon season, particularly in the north-east in June 2022.