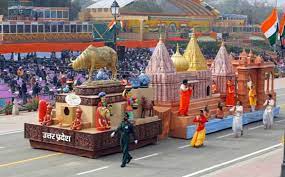 Uttar Pradesh’s tableau at the Republic Day parade was adjudged the best while the Indian Navy’s marching contingent topped among the three services, the defence ministry said on Friday.

The tableau of Uttar Pradesh was based on the theme ‘one district one product and Kashi Vishwanath Dham’. A total of 12 states and union territories had participated in the Republic Day parade on January 26, 2022.

The popular choice category award was introduced for the first time in 2022, wherein the general public was invited to vote for the best marching contingents and best tableaux through the MyGov platform. The online poll was conducted between January 25-31, 2022. Best state/UTs Tableau – Maharashtra (Theme ‘Biodiversity and State Bio-symbols of Maharashtra’.)