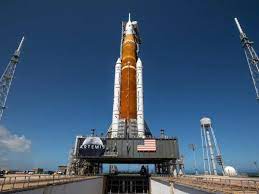 NASA’s massive rocket, called the Space Launch System (SLS), is ready to blast off Monday morning from Cape Canaveral, Fla. Atop the rocket sits Orion, the spacecraft that will eventually take astronauts to the moon.

This mission — dubbed Artemis I — is a critical test of several things: how SLS performs; how Orion performs; and how its heat shield holds up upon re-entry after travelling to the moon and coming in at extremely high speeds. It would be a significant milestone in the space agency’s initiatives to bring humans back to the Moon’s surface for the first time since 1972. The SLS massive rocket will carry the crew capsule around the Moon further than any spacecraft made for humans has ever done, before returning to Earth for a splashdown in the Pacific Ocean.

Artemis-1 will test how well SLS and Orion can complete a mission to the Moon and back and will ensure that both rocket and the spacecraft can safely ferry astronauts that far into space and back. The spacecraft will stay in orbit for approximately six days to collect data and allow mission controllers to assess the performance of the spacecraft. According to a news release from the agency, the unmanned mission will be the “1st integrated test of NASA’s deep space exploration system,” which incorporates the Orion spacecraft, the SLS rocket, and the ground structures at Kennedy Space Center in Cape Canaveral, Florida. “This is a mission that truly will do what hasn’t been done and learn what isn’t known,” Mike Sarafin, Artemis 1 mission manager at NASA Headquarters in Washington, said in the news release. “It will blaze a trail that people will follow on the next Orion flight, pushing the edges of the envelope to prepare for that mission.” Since the Saturn V mission in the 1960s and 1970s, the SLS rocket is the most dynamic one ever built. Up until this point, it was parked within a structure at Florida’s Kennedy Space Center.

How The Rocket Will Manoeuver:

The rocket will travel 4.2 miles from NASA’s Vehicle Assembly Complex to the launchpad at an average speed of 1 to 2 miles per hour in about 10 hours. The Orion spacecraft, designed to transport astronauts on trips into orbit lasting up to a few weeks, is perched atop this rocket. The mission will endure for around three weeks and conclude with proof of Orion’s preparation to return to Earth in a secure way. Off the coast of Baja, California, the spacecraft will do a precise landing within the visual range of the rescue vehicle. The mission will be followed by Artemis 2, which is scheduled to orbit the moon with a crew by 2024, and Artemis 3, which is scheduled to make a moon landing with a crew by 2025.