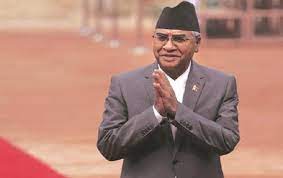 Sher Bahadur Deuba elected for consecutive 7th time from Dadeldhura district: Prime Minister Sher Bahadur Deuba of Nepal was elected for the seventh time in a row from his home district of Dadeldhura. The counting of votes continues for parliamentary and provincial elections in the country. Senior Nepali Congress leader, Mr. Deuba defeated an independent candidate Sagar Dhakal by a margin of over 12 thousand votes. Deuba, the 77-year-old Nepali Congress president, is now serving as Prime Minister for the fifth time.

The parliamentary and provincial elections were held on 20th of November in Nepal. It was the second general election since the promulgation of the constitution in 2015. Deuba received 25,534 votes, while Sagar Dhakal, 31, an independent candidate, received 1,302 votes. Deuba has never lost any parliamentary election in the five decades of his political career.

Nepal, formerly known as the Federal Democratic Republic of Nepal, is a landlocked South Asian country. The name “Nepal” is first recorded in texts from the Vedic period of the Indian subcontinent, the era in ancient Nepal when Hinduism was founded, the predominant religion of the country. It is mainly situated in the Himalayas, but also includes parts of the Indo-Gangetic Plain, bordering the Tibet Autonomous Region of China to the north, and India in the south, east, and west, while it is narrowly separated from Bangladesh by the Siliguri Corridor, and from Bhutan by the Indian state of Sikkim.

Nepal’s geography is diversified, with fertile plains, subalpine wooded hills, and eight of the world’s ten largest mountains, including Mount Everest, the highest point on the planet. Nepal is a multi-ethnic, multi-lingual, multi-religious, and multi-cultural country, with Nepali serving as the official language. Kathmandu is the nation’s capital and the largest city.