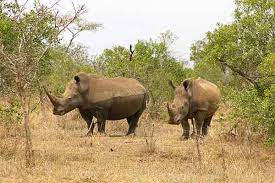 Proposal to degrade the status of Southern white rhino from Appendix I to Appendix II was accepted at COP19 to CITES.: The proposal was given by Botswana and Namibia. However, the parties rejected the proposal of Eswatini (formerly known as Swaziland) to allow trade in rhino horns. King Mswati III International Airport in Eswatini is a hub for rhino horns imported illegally from South Africa and other southern African countries.

Under Appendix II, the animals may not be threatened with extinction but the trade of such animals should be controlled.

It is the most common and widespread subspecies of rhinos. It is the second largest and heaviest land mammal. The maximum population of southern white rhino lives in South Africa, Namibia, Zimbabwe, Kenya and Uganda.