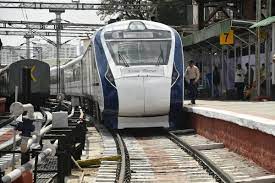 Railways Plans to Export Vande Bharat Trains by 2025-26: A senior railway official said that the railways plans to become a major exporter of Vande Bharat trains to markets in Europe, South America, and East Asia by 2025-26, and that the latest version of the indigenous trains with sleeping coaches will be operational by the first quarter of 2024.

He also said the railways is planning to clock 10-12 lakh kilometers on 75 Vande Bharat trains over the next few years, for these to be export ready. “The ecosystem to export trains has to be created over the next two to three years. We are on track to manufacture 475 Vande Bharat trains in the next three years and once they run successfully, there will be confidence in global markets about our product.

The Vande Bharat trains meet all international standards,” he said. Talking about these trains, the official said these have a rider index of three, which means no or minimal jolts for passengers; and noise level of 65 decibel which is 100 times less than the sound produced in aircraft.

He also said that while the present Vande Bharat trains are fit for broad gauge, the railways’ manufacturing units will customise the trains to run on standard gauges used by countries across the world.

The Union Budget for 2023-24 will likely announce 300 more Vande Bharat trains to provide further fillip to the indigenously built semi-high speed trains. If budgetary support comes through, the country will produce 800 trainsets in the next five years.

Prime Minister Narendra Modi has asked the Railways to produce at least 75 Vande Bharat trains by August 2023 to launch the services connecting 75 key cities as part of the central government’s plans to celebrate 75 years of Independence.

Vande Bharat trains manufactured at ICF Chennai are designed to run at a maximum speed of 180 kmph on broad gauge operation. Vande Bharat is a superior product with low cost. Currently only eight countries are having 180 kmph speed technology. The focus is to bring in new technology every year.

Indian Railway has finalised tenders for 502 Vande Bharat trains, of which 200 trainsets would have a sleeper facility. The sleeper design for Vande Bharat is almost final, and manufacturing of these trains with sleeper will begin shortly.

The Railway Minister said that the first such train with a sleeper facility would roll out in the first quarter of 2024.The minister said Vande Bharat trains would be manufactured at Raebareli, Latur, and Sonepat, besides Kapurthala and ICF.