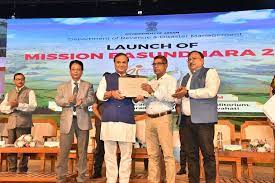 According to sources in the Revenue and Disaster Management (R&DM) Department, Basundhara 2.0 will include several new services that were not in the first phase of Mission Basindhara. The Chief Minister will launch the mission tomorrow in Guwahati. Soon after the launching of Mission Basundhara 2.0, willing people can apply online through www.rtps.assam.gov.in. After coming to power, this government led by Himanta Biswa Sarma noticed numerous unsolved land-related issues affecting the indigenous people in the state. Gauzing the gravity of the situation, this government launched Mission Basundhara on October 2, 2021. In the first phase of this mission, 8,13,981 people applied to get their land-related issues resolved. The department disposed of all the applications in a time-bound manner, benefitting 5,82,688 applicants. The department, however, rejected 2,31,293 applications after proper verification.

It is only for the indigenous people with mandatory three generation clear residency. Govt will verify the residency claims if gov.t have doubts. The doubtful claims will be reviewed later. The first phase of Mission Basundhara was launched last year. During the event, the Assam CM, Hemant Biswa has also launched e-stamping facilities in the State.