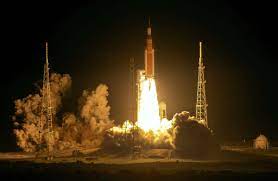 NASA’s Artemis mission launches successfully: NASA launched the Artemis I mission from Florida at 1:47 a.m. ET on Wednesday morning, with the agency’s most powerful rocket ever kicking off a nearly month-long journey with a ground-shaking liftoff.

While no astronauts are onboard, the Space Launch System (SLS) rocket carried the Orion capsule to space in a demonstration for NASA’s lunar program. Artemis I will not land on the moon, but the spacecraft will orbit nearby before returning to Earth in 26 days.

The project, comprising the Space Launch System (SLS) rocket and Orion spacecraft. It carries a toy called Shaun the Sheep, and two dummies, Helga and Zohar which pack 5,600 radiation sensors. Ten payloads, including Lunar IceCube and Lunar Polar Hydrogen Mapper, are also onboard. The Artemis 1 project will be followed by the Artemis 2 and Artemis 3 missions.