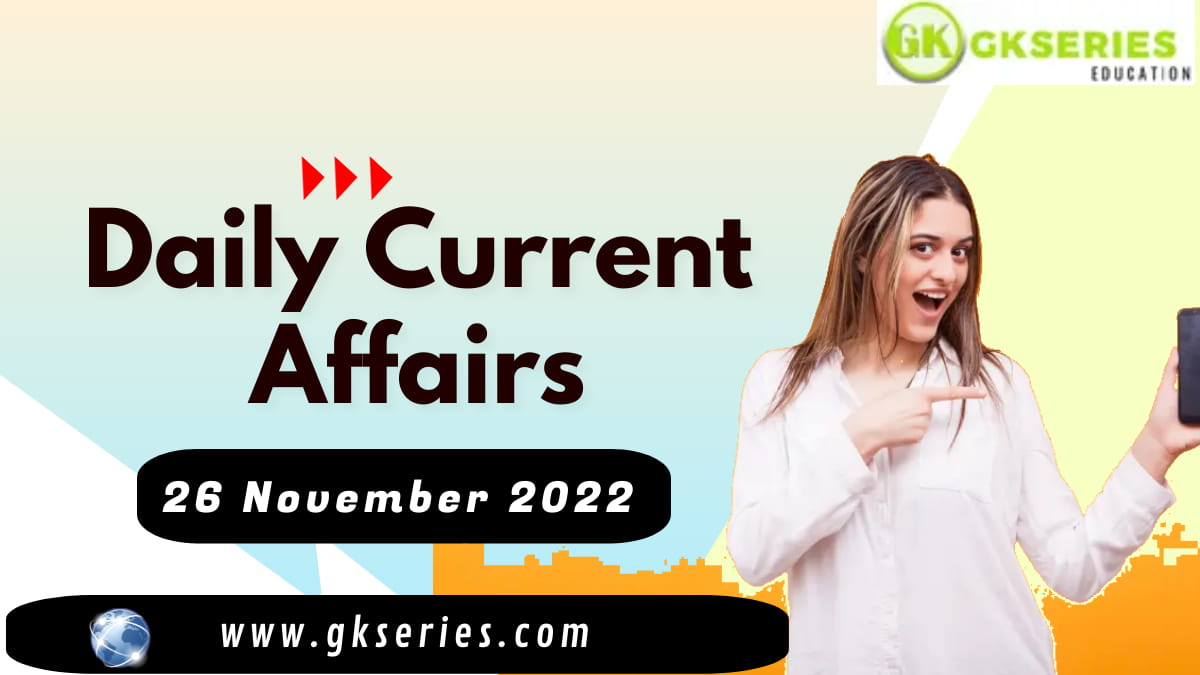 Current Affairs is the most important area in all competitive exams. But the difficulty level is very high. That’s why; many aspirants get confused, how to select Current Affairs for Preparation of Competitive Examination? In this Post, Daily Current Affairs 26 November 2022, we have tried to cover each and every point and also included all important facts from National/ International news that are useful for upcoming competitive examinations such as UPSC, SSC, Railway, State Govt. etc.

India, UAE Central Banks Discuss Rupee-Dirham Trade Prospects: The central banks of India and UAE are discussing a concept paper on promoting bilateral trade in rupee and dirham with a view to reduce transaction cost, a top official said.

Concerning the Development: Sunjay Sudhir, India’s Ambassador to the UAE, stated that India shared the concept paper for trade in local currencies. Both countries’ central banks will meet to discuss standard operating procedures and modalities.

In India, Verghese Kurien is known as the “Father of the White Revolution.” He was a social entrepreneur whose vision of the “Billion-Litre Idea”, Operation flood, made dairy farming India’s largest self-sustaining industry and the largest rural employment sector providing a third of all rural income. This made India the largest producer of milk in the world.

India Expresses Commitment to Peace, Security and Prosperity in the Indo-Pacific Region

India Expresses Commitment to Peace, Security and Prosperity in the Indo-Pacific Region: India and Asean in a joint statement reaffirmed the importance of maintaining and promoting peace, stability, maritime safety, freedom of navigation and overflight in the Indo-Pacific region, and also commitment to peaceful resolution of disputes, in accordance with international law, including UNCLOS.

As Vice President Jagdeep Dhankhar addressed the 19th Asean-India Summit in Phnom Penh, they called for the establishment of a comprehensive strategic partnership and increased collaboration against terrorism.

India hailed the deep cultural, economic and civilizational ties that have existed between India and South East Asia from time immemorial and stated that the India-ASEAN relationship forms the central pillar of India’s ACT-EAST policy. India reiterated its commitment to ASEAN’s significance in the Indo-Pacific.

As part of maintaining “ASEAN-Centrality”, the two sides reaffirmed the importance of deepening dialogue and coordination through ASEAN-led mechanisms including the ASEAN-India Summit, the East Asia Summit, the Post-Ministerial Conference with India (PMC+1), the ASEAN Regional Forum (ARF), the ASEAN Defense Ministers’ Meeting-Plus (ADMM-Plus), the Expanded ASEAN Maritime Forum (EAMF).

ASEAN and India adopted a joint statement announcing the elevation of the existing Strategic Partnership to Comprehensive Strategic Partnership. It reaffirmed India’s commitment to enhancing India-ASEAN collaboration in a variety of areas, including marine activities, counter-terrorism, cyber security, digital economy, environment, science and technology, and tourism, among others. It proposes expediting the review of ASEAN-India Trade in Goods Agreement (AITIGA) to make it more user-friendly, simple, and trade-facilitative.

About Association of Southeast Asian Nations(ASEAN):

It is a regional grouping that promotes economic, political, and security cooperation. The founding fathers of ASEAN, namely Indonesia, Malaysia, the Philippines, Singapore, and Thailand, signed the ASEAN Declaration (Bangkok Declaration) in August 1967 in Bangkok, Thailand. Its chairmanship rotates annually, based on the alphabetical order of the English names of Member States.

ASEAN is an organisation made up of 10 Southeast Asian countries: Brunei, Cambodia, Indonesia, Laos, Malaysia, Myanmar, the Philippines, Singapore, Thailand, and Vietnam.

The Indian Constitution was enacted by the Constituent Assembly on November 26, 1949, and went into effect on January 26, 1950. The Ministry of Social Justice and Empowerment announced the decision of the Centre to mark November 26th as Constitution Day in 2015. The day is observed to promote constitutional values among the citizens of India.

Dr. B.R. Ambedkar was the chairman of the drafting committee of the Constituent Assembly. He was the first Minister of Law and Justice in India. The framing of the constitution took over 2 years, 11 months, and 17 days.

The constituent assembly included 299 members, 15 of whom were women. When the constitution was adopted in 1949, it was signed by 284 members. The Chairman of the Constituent Assembly was Dr. Rajendra Prasad.

By securing over 90% of the votes cast by full members of International Electrotechnical Commission (IEC) during its General Meeting held recently in San Francisco, USA, India’s representative, a member of the Indian National Committee of the International Electrotechnical Commission (IEC) and various technical committees of Bureau of Indian Standards (BIS-India), was elected.

Representation of BIS (India) in policy and governance bodies of International Organization for Standardization (ISO) and IEC ensures that Indian viewpoints on the important strategic and policy matters are put forth and it also provides opportunities to align the national standardization priorities with International best practices.

About Bureau of Indian Standards (BIS):

ISRO Begins Countdown for PSLV-C54 Mission: The Indian Space Research Organisation (ISRO) has commenced the countdown to the launch of the Oceansat Earth Observation Satellite and eight other customer satellites on a PSLV-C54 rocket from the Sriharikota spaceport.

The countdown for the 56th flight of the Polar Satellite Launch Vehicle (PSLV), in its extended version (PSLV-XL), from the first launchpad at the Satish Dhawan Space Centre, Sriharikota, 115 km from here.

The primary payload of the rocket is an Oceansat which would be separated in orbit-1 while the eight other nano-satellites would be placed in different orbits based on the customer requirements (in the Sun-synchronous polar orbits).

About This Historic mission:

The mission would be one of the longest attempted by ISRO scientists, who would use the rocket’s two-orbit change thrusters (OCTs) in the PSLV-C54 launch vehicle to shift orbits. The separation of the Earth Observation Satellite is expected to take place in orbit-1 while the passenger payloads would be separated in Orbit-2.

The Earth Observation Satellite is expected to be deployed after reaching an altitude of approximately 742 km about 20 minutes following launch.

About The Satellite & Its Objective:

The Earth Observation Satellite-6 is the third-generation satellite in the Oceansat series. This is to provide continuity services of Oceansat-2 spacecraft with enhanced payload specifications as well as application areas.

The objective of the mission is to ensure data continuity of ocean colour and wind vector data to sustain the operational applications.

About The Other Satellites To Be Launched:

The customer payloads include ISRO Nano Satellite-2 for Bhutan (INS-2B) which would have two payloads namely NanoMx and APRS-Digipeater. NanoMx is a multispectral optical imaging payload developed by Space Applications Centre while APRS-Digipeater payload is jointly developed by Department of Information Technology and Telecom, Bhutan, and U R Rao Satellite Centre, Bengaluru.

The ‘Anand’ satellite developed by Pixxel is technology demonstrator to demonstrate the capabilities and commercial applications of miniature earth observation camera for observation using a micro-satellite in low earth orbit.

The ‘Thybolt’ (two satellites) is from another space start-up Dhruva Space while Astrocast is a technology demonstrator satellite for the internet of things as the payload from Spaceflight, the United States of America.

About PSLV-C54 Rocket: PSLV & Its Importance:

The PSLV C54 rocket has four stages, each with its own propulsion system and hence capable of functioning independently. The first and third stages used composite solid propellants, while the second and fourth stage use earth-storable liquid propellant.

Railways Plans to Export Vande Bharat Trains by 2025-26: A senior railway official said that the railways plans to become a major exporter of Vande Bharat trains to markets in Europe, South America, and East Asia by 2025-26, and that the latest version of the indigenous trains with sleeping coaches will be operational by the first quarter of 2024.

He also said the railways is planning to clock 10-12 lakh kilometers on 75 Vande Bharat trains over the next few years, for these to be export ready. “The ecosystem to export trains has to be created over the next two to three years. We are on track to manufacture 475 Vande Bharat trains in the next three years and once they run successfully, there will be confidence in global markets about our product.

The Vande Bharat trains meet all international standards,” he said. Talking about these trains, the official said these have a rider index of three, which means no or minimal jolts for passengers; and noise level of 65 decibel which is 100 times less than the sound produced in aircraft.

He also said that while the present Vande Bharat trains are fit for broad gauge, the railways’ manufacturing units will customise the trains to run on standard gauges used by countries across the world.

The Union Budget for 2023-24 will likely announce 300 more Vande Bharat trains to provide further fillip to the indigenously built semi-high speed trains. If budgetary support comes through, the country will produce 800 trainsets in the next five years.

Prime Minister Narendra Modi has asked the Railways to produce at least 75 Vande Bharat trains by August 2023 to launch the services connecting 75 key cities as part of the central government’s plans to celebrate 75 years of Independence.

Vande Bharat trains manufactured at ICF Chennai are designed to run at a maximum speed of 180 kmph on broad gauge operation. Vande Bharat is a superior product with low cost. Currently only eight countries are having 180 kmph speed technology. The focus is to bring in new technology every year.

Indian Railway has finalised tenders for 502 Vande Bharat trains, of which 200 trainsets would have a sleeper facility. The sleeper design for Vande Bharat is almost final, and manufacturing of these trains with sleeper will begin shortly.

The Railway Minister said that the first such train with a sleeper facility would roll out in the first quarter of 2024.The minister said Vande Bharat trains would be manufactured at Raebareli, Latur, and Sonepat, besides Kapurthala and ICF.

IIT Delhi Ranks in top 50 of Times Higher Education Employability Rankings: The Indian Institute of Technology (IIT), Delhi has been placed at the 28th position in the Top 50 of Times Higher Education Global Employability University Ranking and Survey (GEURS). The sole Indian institute in the top 50 is IIT Delhi. The varsity was ranked 27th last year.