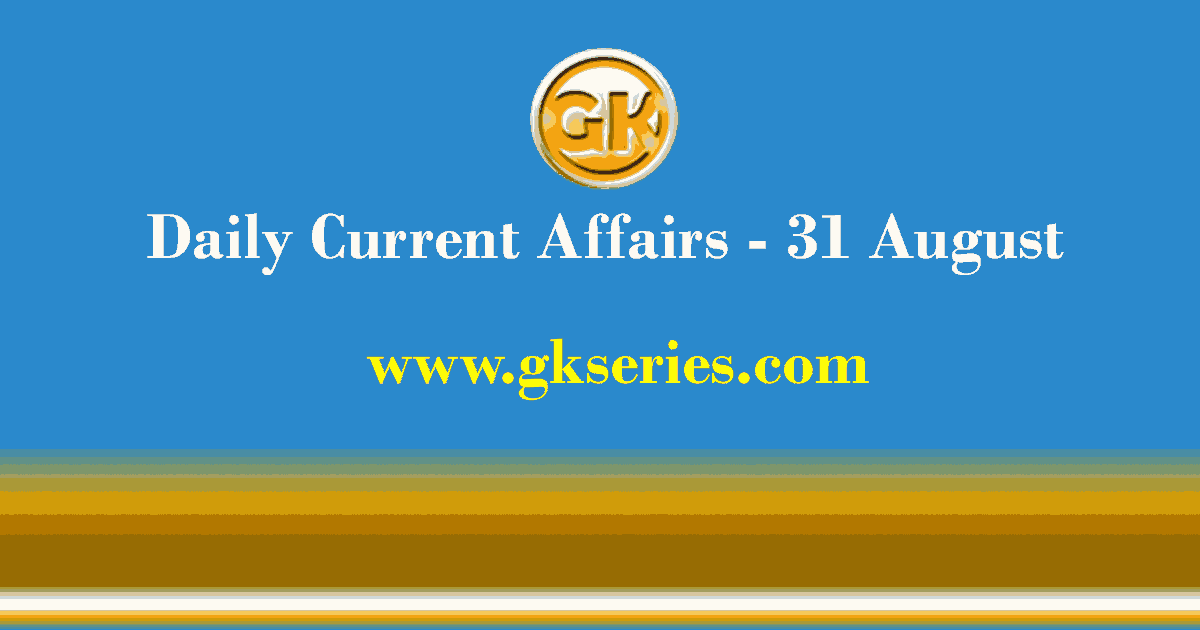 Current Affairs is the most important area in all competitive exams. But the difficulty level is very high. That’s why; many aspirants get confused, how to select Current Affairs for Preparation of Competitive Examination? In this Post, Daily Current Affairs 31 August 2021, we have tried to cover each and every point and also included all important facts from National/ International news that are useful for upcoming competitive examinations such as UPSC, SSC, Railway, State Govt. etc.

The Reserve Bank of India has permitted authorised card networks to offer card tokenisation services to any token requestor in a bid to make card transactions more safe, secure and convenient for the users.

In a notification issued, RBI said that it has provided the facility to interested card holders only for their mobile phones and tablets.

There has been an uptake in the volume of tokenised card transactions during the recent months and on a review of the framework and keeping in view stakeholders feedback, RBI decided to extend the scope of tokenisation to include consumer devices – laptops, desktops, wearables (wrist watches, bands, etc.) and Internet of Things (IoT) devices.

The Central Board of Direct Taxes (CBDT) has further extended the deadline for the payment of amounts under the direct tax dispute resolution scheme — ‘Vivad Se Vishwas’.

Considering the difficulties being faced in issuing and amending Form no 3, which is a prerequisite for making payment by the declarant under Vivad se Vishwas Act, it has been decided to extend the last date of payment of the amount (without any additional amount) to 30th September, 2021. Necessary notification to this effect shall be issued shortly.

It is, however, clarified that there is no proposal to change the last date for payment of the amount (with additional amount) under Vivad se Vishwas Act, which remains as 31st October, 2021.

The 15th Finance Commission has tied grants of ₹1,42,084 crore to ensure more funds to gram panchayats to make their water supply and sanitation-related plans.

Commission also identified ‘water supply and sanitation’ as national priority areas, which determines the quality of life of people living in rural areas.

It has recommended 60% of the allocation to RLBs/ Panchayats i.e. Rs. 1,42, 084 Crore as a tied grant to be utilized for a.) supply of drinking water, rainwater harvesting and water recycling; and b.) sanitation & maintenance of open-defecation free (ODF) status.

The Dept. of Drinking Water & Sanitation (DDWS), Ministry of Jal Shakti, Govt of India will act as the nodal Department for determining the eligibility of the rural local bodies for the ‘15th FC tied grant for water & sanitation’ and recommend release of tied grant for water & sanitation, to the Dept. of Expenditure, Ministry of Finance for all States.

The Minister of Youth Affairs and Sports, Anurag Singh Thakur has launched the Fit India Mobile Application on 29th August 2021.

The Fit India App is free and available in English & Hindi on both the Android and the iOS platforms.

The Fit India Movement was launched on 29th August 2019 by Prime Minister Narendra Modi with the vision of making India a Fit and Healthy Nation.

Over the past two years, the Fit India Movement has reached millions of people across the country through its various fitness campaigns such as Fit India School Week, Fit India Freedom Run, Fit India Cyclothon and many others.

The Memorandum of Understanding between ICAI of India and IPAR of Russia, is expected to give ICAI Members a boost in their quest for professional possibilities in Russia.

The ICAI will be able to help deepen the partnership with Russia by providing Export of Accountancy Services under the terms of the MoU.

The Institute of Professional Accountants of Russia (IPAR) is the largest not-for-profit accounting organisation of Russia.

The Y-Break mobile application has been developed by MDNIY (Morarji Desai National Institute of Yoga).

Through this app, yoga and meditation can be done anywhere in just 5 minutes.

To orient the young minds towards Ayush and help them remain healthy, a series of sensitization lectures on the Ayush system for higher secondary school students and college students will also be launched during the week and IEC material will be distributed to them.

A suspected militant attack left five truckers dead in Assam’s Dima Hasao hill district. As per reports, a convoy of about seven trucks — carrying clinker and coal from a factory — were fired upon, and then set ablaze.

The Dimasas (or Dimasa-Kacharis) are the earliest known rulers and settlers of Assam, and now live in Dima Hasao, Karbi Anglong, Cachar, Hojai and Nagaon districts of central and southern Assam, as well as parts of Nagaland.

Prior to Ahom rule, the Dimasa kings — believed to be the descendants of the rulers of the ancient Kamarupa kingdom — ruled large parts of Assam along the south bank of the Brahmaputra between the 13th and 16th centuries.

NITI Aayog reported that the government should give Income tax breaks to attract retail investors into instruments like Infrastructure Investment Trusts (InvITs) to make the National Monetisation Pipeline (NMP) a success.

The Centre’s think tank driving the NMP, estimated to raise almost ₹6 lakh crore for the exchequer over four years, has also called for bringing such trusts within the ambit of the Insolvency and Bankruptcy Code (IBC) to provide greater comfort to investors.

Bringing in policy and regulatory changes to scale up monetisation instruments such as InvITs and Real Estate Investment Trusts (REITs) and expand their investor base have been identified as a critical element for the NMP.

The government plans to use the InvIT and REIT route to monetise public assets such as highways, gas pipelines, railway tracks and power transmission lines.

The Indian Meteorological Department (IMD) recently issued an orange alert for Uttarakhand. The state has been receiving intermittent rains causing waterlogging and landslides.

IMD is an agency of the Ministry of Earth Sciences of the Government of India. It is the principal agency responsible for meteorological observations, weather forecasting and seismology.

IMD is headquartered in Delhi and operates hundreds of observation stations across India and Antarctica. Regional offices are at Chennai, Mumbai, Kolkata, Nagpur, Guwahati and New Delhi.

It has the responsibility for forecasting, naming and distribution of warnings for tropical cyclones in the Northern Indian Ocean region, including the Malacca Straits, the Bay of Bengal, the Arabian Sea and the Persian Gulf.

Women and Child Development Ministry will celebrate the POSHAN Maah across the nation throughout the September month.

Launched by Prime Minister Narendra Modi in 2018, the POSHAN (Prime Minister’s Overarching Scheme for Holistic Nutrition) Abhiyaan directs the attention of the country towards the problem of malnutrition and address it in a mission-mode.

POSHAN Abhiyaan is a People’s Movement by incorporating inclusive participation of public representatives of local bodies, government departments, social organizations and the public and private sector at large.

Chennai-born Sethuraman collected 7.5 points after the ninth and final round to tie the score with Daniil Yuffa of Russia.

However, the Indian player emerged as the winner on the basis of a better tie-break score. India’s Karthikeyan Murali finished third.

The Tamil Nadu Assembly recently adopted a resolution urging the Centre to withdraw three contentious farm laws, against which farmers have been holding protests outside Delhi for months.

The Farmers’ Produce Trade and Commerce (Promotion and Facilitation) Act, 2020, The Farmers (Empowerment and Protection) Agreement on Price Assurance and Farm Services Act, 2020 The Essential Commodities(Amendment) Act, 2020 — are the three key legislations passed by Parliament in September 2020.

These acts envisage to bring change in some of the key aspects of the farm economy — trade in agricultural commodities, price assurance, farm services including contracts, and stock limits for essential commodities.

These acts sought to bring much needed reforms in the agricultural marketing system such as removing restrictions of private stock holding of agricultural produce or creating trading areas free of middlemen and take the market to the farmer.