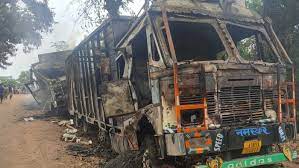 A suspected militant attack left five truckers dead in Assam’s Dima Hasao hill district. As per reports, a convoy of about seven trucks — carrying clinker and coal from a factory — were fired upon, and then set ablaze.

The Dimasas (or Dimasa-Kacharis) are the earliest known rulers and settlers of Assam, and now live in Dima Hasao, Karbi Anglong, Cachar, Hojai and Nagaon districts of central and southern Assam, as well as parts of Nagaland.

Prior to Ahom rule, the Dimasa kings — believed to be the descendants of the rulers of the ancient Kamarupa kingdom — ruled large parts of Assam along the south bank of the Brahmaputra between the 13th and 16th centuries.