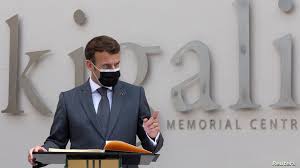 French President Emmanuel Macron recently asked for forgiveness for his country’s role in the 1994 Rwandan massacre in which about 800,000 people, mostly ethnic Tutsis, were killed.

The Rwandan genocide occurred between 7 April and 15 July 1994 during the Rwandan Civil War. During this period of around 100 days, members of the Tutsi minority ethnic group, as well as some moderate Hutu and Twa, were slaughtered by armed militias.

France, which enjoyed close ties with Rwanda’s Hutu-led government of President Juvénal Habyarimana, has long been criticised for its role in the killings of the Tutsi minorities in the months of April to June 1994.

Rwanda is a landlocked country in the Great Rift Valley, where the African Great Lakes region and East Africa converge. Its capital city is Kigali.

Located a few degrees south of the Equator, Rwanda is bordered by Uganda, Tanzania, Burundi, and the Democratic Republic of the Congo. It is highly elevated, giving it the soubriquet “land of thousand hills”.