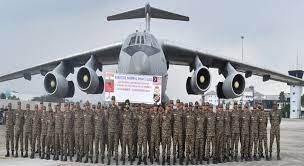 Aim: To enhance the defence cooperation between Indian Army and the Malaysian Army.

In the Harimau Shakti 2022 exercise, joint operations would include both training and operations. Combat-experienced troops of the Garhwal Rifles Regiment of the Indian Army and the Royal Malay Regiment of the Malaysian Army are participating in the exercise. It is an annual training event has been conducted since 2012.

Malaysia is one of the most important countries for India’s Look East and Act East Policy. Around 7.2% of the population of Malaysia is of Indian origin. The two countries have close political, economic and socio-cultural relations. The relationship is further fostered with regular military exercises between the two countries.

This joint military exercise is unique as it is for the first time that the Armed Forces of Malaysia and India held all three joint exercises in a year. Joint Naval Exercise Samdura Laksamana was held in May 2022, followed by Joint Air Exercise Udara Shakti and presently Joint Military Exercise in August 2022.