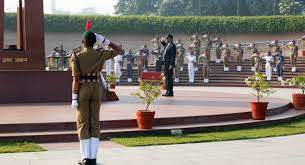 Formation of the NCC:

The National Cadet Corps Act of 1948 established the NCC in India after independence, and it was established on July 15, 1948. The NCC is a voluntary military cadet corps under the Union Ministry of Defence and is open to school and college students. It was set up to create a human resource of organized, trained and motivate youth to provide leadership in all walks of life and always available for the service of the nation.