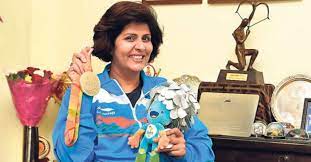 Deepa highlighted that “health is the ultimate wealth”, urging participation in the movement, contributing to building momentum to ensure India becomes free of TB by 2025. She further extended her support to the campaign by becoming a Ni-Kshay Mitra, an initiative launched by President Droupadi Murmu which strives to provide aid to TB-afflicted patients on three levels of nutritional, additional diagnostic, and vocational support.