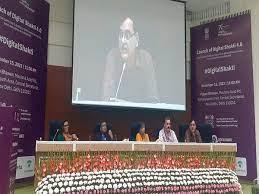 More About The Campaign:

Digital Shakti started in June 2018 to help women across the nation to raise the awareness level on the digital front, to build resilience, and fight cyber-crime in the most effective ways. The Digital Shakti 4.0 aims to empower women with the digital skills and knowledge to speak up against any inappropriate or illegal activity online.

NCW launched the campaign in collaboration with CyberPeace Foundation and Meta. Through this project, over 3 Lakh women across India have been made aware of cyber safety tips and tricks. It is helping women in reporting & redressal mechanisms, data privacy and usage of technology for their benefits.

In line with its commitment to creating safe spaces for women and girls online, Digital Shakti 4.0 is focused on making women digitally skilled and aware of standing up against any illegal/inappropriate activity online. NCW launched it in collaboration with CyberPeace Foundation and Meta, said by the Ministry of Women and Child Development.

While addressin, Rekha Sharma, Chairperson, NCW mentioned the Commission’s continuous efforts to empower women in every sphere across the nation, added the press release.

About The Previous session:

In March 2021, the NCW Chairperson officially launched the third phase of the programme in Leh in the presence of the Ladakh MP Jamyang Tsering Namgyal and Lieutenant Governor Radha Krishna Mathur.  In the third phase, a Resource Center was also developed under the project to provide information on all the avenues of reporting in case a woman faces any cybercrime.