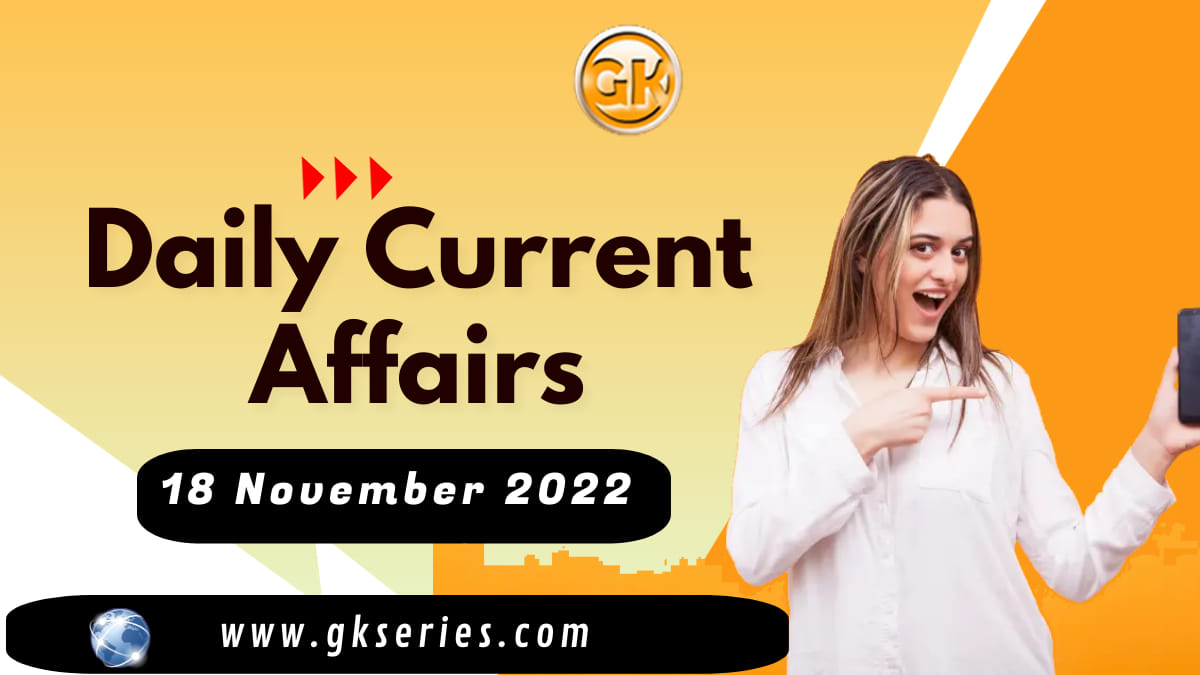 Current Affairs is the most important area in all competitive exams. But the difficulty level is very high. That’s why; many aspirants get confused, how to select Current Affairs for Preparation of Competitive Examination? In this Post, Daily Current Affairs 18 November 2022, we have tried to cover each and every point and also included all important facts from National/ International news that are useful for upcoming competitive examinations such as UPSC, SSC, Railway, State Govt. etc.

States and Capitals of India 2022

Selection and Powers of Governor in India

The governor just needs to meet two requirements: first, he must be an Indian citizen, and second, he must be 35 or older. There are two conventions that the government follows to nominate a governor that is the person who is going to be appointed as the governor must not belong to the state, he shall be an outsider with having no relations with the state. The other one is the consultation of the chief minister is taken before the appointment of a governor by the president. He is the executive head of the state he is appointed to. All the executive actions that are performed in the state are in the name of the governor.

Selection and Powers of Chief Minister in India

What is Corps of Engineers in Indian Army?

Uttar Pradesh To Register Maximum Number of New Companies After Maharashtra Post Covid: UP has added the most number of new companies after Maharashtra since the outbreak of Covid-19, beating industrial hubs such as Delhi, Karnataka and Tamil Nadu, data combined by the corporate affairs ministry (MCA) show.

What The Report Pointed:

With 1.04 lakh and 99,038 active companies, Karnataka and Tamil Nadu are fourth and fifth, respectively.

UP has overtaken Karnataka, Tamil Nadu, and Telangana in the post-pandemic stage. Uttar Pradesh added 30,000 companies in the past three years, which helped it emerge the third state in terms of number of active companies behind only Maharashtra and Delhi. On the other hand, Maharashtra continues to lead the pack after adding 60,000 new companies in the past three years. Maharashtra’s dominance comes largely from the fact that its capital, Mumbai is the financial capital of India and serves as a hub for several mid-size and big companies.

NAA’s investigation arm will continue to function in some form under CCI. The official said that the move will reduce the multiplicity of regulators as CCI can handle cases independently. The plan is to transfer cases to CCI after NAA’s term ends.

NAA’s role is to make sure that the benefit of tax rate reduction reaches the consumer immediately. This has been the role of NAA primarily because the GST council has been rejigging the rates in the last five years. NAA has little to do when rates go up.

Authorities are still receiving several complaints about the early years of GST, saying that the benefit of the input tax credit has not been fully passed on to consumers. Sectors like eateries, cinemas, real estate, fast-moving consumer goods, etc. have come under the most intense scrutiny from NAA. In many cases, the regulator ordered the business to return the allegedly overcharged amounts to the consumer.

Section 171 of the Central Goods and Services Tax Act of 2017 authorised the establishment of a National Anti-Profiteering Authority (NAA). The NAA was set up to monitor and to oversee whether the reduction or benefit of input tax credit is reaching the recipient by way of appropriate reduction in prices.

National Anti-profiteering Authority (NAA) is therefore primarily constituted by the central government to analyse whether input tax credits availed by any registered person or the reduction in the tax is passed onto the consumer and he/she is protected from random price increase for self-interests in the name of GST.

Star Indian paddler Achanta Sharath Kamal has become the first player from India to get elected in the Athletes’ Commission of the International Table Tennis Federation (ITTF). Eight athletes including four male and four female, were elected from Asia, Africa, the Americas, Europe, and Oceania and will serve in the Athletes’ Commission for four years from 2022 to 2026. In a release issued by Table Tennis Federation of India, Sharath thanked the whole of Asia and all the voters for showering affection and faith on him. The online elections took place between 7 to 13 November 2022. 10 athletes were elected for the ITTF Athletes’ Commission for a four-year term from 2022 to 2026. Two para-athletes received the most votes out of the eight athletes elected from the continents of Asia, Africa, Europe, South America, North America, and Oceania.

World Antimicrobial Awareness Week 2022: Every year, from November 18 to November 24, there is World Antimicrobial Awareness Week (WAAW).  It’s an international initiative to increase awareness of the growing problem of resistance to antibiotics and other antimicrobial medicines. The objective of the week is to raise awareness of global antimicrobial resistance, encouraging best practices among the general public, health workers and policy makers to avoid further emergence and spread of drug-resistant infections.

“Preventing Antimicrobial Resistance Together” is the theme of WAAW this year.  World Antimicrobial Awareness Week (WAAW) is a global campaign that is celebrated annually to improve awareness and understanding of AMR and encourage best practices among the public, One Health stakeholders and policymakers, who all play a critical role in reducing the further emergence and spread of AMR.

The World Health Organization (WHO) defines it this way:

“Antibiotic resistance occurs when bacteria change in response to the use of these medicines. Bacteria, not humans or animals, become antibiotic-resistant.”Antimicrobial resistance (AMR) develops when bacteria, viruses, fungi, and parasites adapt over time and stop responding to medications, making infections harder to treat and increasing the risk of disease transmission, life-threatening sickness, and death.As a result of drug resistance, antibiotics and other antimicrobial medicines become ineffective and infections become increasingly difficult or impossible to treat.

The World Health Organisation launched “World Antibiotic Awareness Week” in 2015 to raise global awareness and promote action to halt the emergence and spread of antibiotic-resistant bacteria. The campaign was rebranded as “World Antimicrobial Awareness Week” in 2020. The World Health Organization (WHO) projects a sense of urgency around the global issue of antibiotic resistance — and with good reason. If you develop an illness or an infection that can’t be treated in the traditional way with antibiotics, you can die.

The 5th Naturopathy Day is being put on by the Central Council for Research in Yoga and Naturopathy at the campus of the MIT Art, Design, and Technology University in Pune.  On this Occasion an International Conference on Yoga and Naturopathy is being organized by CCRYN. This conference will see renowned speakers in the field of naturopathy and from “World Naturopathic Federation”. This year’s event has the theme “Naturopathy: an Integrative medicine.” In this conference we will learn about developments in the field of naturopathy from eminent researchers and practitioners in relation to education, research, integrative medicine, public health in addition to exploring newer avenues and areas in naturopathy.

Naturopathy techniques were brought to the United States from Germany in the 1800s. The term naturopathy was coined by John Schell in 1895 and popularized by Benedict Lust, also referred to as the ‘Father of Modern Naturopathy’. He was also credited for spreading the knowledge of naturopathy in the United States in 1992. The “Water Cure System,” also known as “Hydrotherapy,” is credited with igniting the naturopathy movement in Germany and other western countries.

The revival of naturopathy in India took place through the translation of German nutritionist Louis Kuhne’s book ‘The New Science of Healing’, which was translated into Telugu by Dronamraju Venkatachalapathy Sarma in 1894. Shri Shroti Kishan Swaroop later translated it into Hindi and Urdu in 1904 to promote naturopathy. The Indian naturopathy movement initially started in the states of Andhra Pradesh, Gujarat, Bengal, Maharashtra and Uttar Pradesh, where people worked hard and contributed significantly to the science.

PFRDA named Suraj Bhan as chairman of NPS Trust: Pension Fund Regulatory & Development Authority has appointed Suraj Bhan as the chairman of the National Pension System Trust (NPS Trust), responsible for managing funds under the National Pension System (NPS). Consequent upon the tenure of the present chairman of the trust coming to an end on November 11, 2022, the authority has designated Suraj Bhan as chairperson of the board of the Trustee with effect from November 12, 2022, Pension Fund Regulatory & Development Authority (PFRDA) said in a circular. Bhan has been a Trustee on the Board of NPS Trust since 2018. He joined the Indian Economic Service in 1983 and retired as Director General of Labour Bureau, Chandigarh, in January 2018. He has varied experience across several sectors with the government and public sector undertakings in the areas of economic policy, business, industry and finance.

Important Takeaways For All Competitive Exams:

Blackstone launches its Asian Data center business from India: Global asset manager Blackstone Group has forayed into the data center business in Asia with a planned capacity across two large hyperscale data centers in India. It plans to increase it to 600 MW over the next two years through presence in five locations in the country. On November 15, 2022, Blackstone released Lumina CloudInfra, a data centre platform. At first, the data centre will be built in Mumbai and Chennai, and then in Delhi-NCR, Hyderabad, and Pune.

What is a Data Center?

A data center is a facility that centralizes an organization’s shared IT operations and equipment for the purposes of storing, processing, and disseminating data and applications. Data centres are essential to the continuity of daily operations because they store the most critical and proprietary assets of an organization.

The Real Estate and Tactical Opportunities funds of Blackstone own and manage the Lumina CloudInfra.  Blackstone’s current investments in digital infrastructure include QTS Realty Trust in US, which it bought in 2021 for about $10 billion, a string of data centers in Japan on long-term contracts with top cloud service providers, Phoenix Towers International, a private cell tower platform in America and Europe, and Hotwire Communications, a pioneer in fiber optic technology.

More About The Campaign:

Digital Shakti started in June 2018 to help women across the nation to raise the awareness level on the digital front, to build resilience, and fight cyber-crime in the most effective ways. The Digital Shakti 4.0 aims to empower women with the digital skills and knowledge to speak up against any inappropriate or illegal activity online.

NCW launched the campaign in collaboration with CyberPeace Foundation and Meta. Through this project, over 3 Lakh women across India have been made aware of cyber safety tips and tricks. It is helping women in reporting & redressal mechanisms, data privacy and usage of technology for their benefits.

In line with its commitment to creating safe spaces for women and girls online, Digital Shakti 4.0 is focused on making women digitally skilled and aware of standing up against any illegal/inappropriate activity online. NCW launched it in collaboration with CyberPeace Foundation and Meta, said by the Ministry of Women and Child Development.

While addressin, Rekha Sharma, Chairperson, NCW mentioned the Commission’s continuous efforts to empower women in every sphere across the nation, added the press release.

About The Previous session:

In March 2021, the NCW Chairperson officially launched the third phase of the programme in Leh in the presence of the Ladakh MP Jamyang Tsering Namgyal and Lieutenant Governor Radha Krishna Mathur.  In the third phase, a Resource Center was also developed under the project to provide information on all the avenues of reporting in case a woman faces any cybercrime.