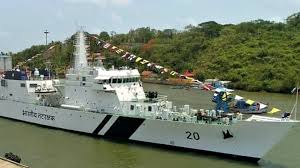 The concept of forming ICG came into being post 1971 war, when it was assessed that maritime borders are equally vital as land borders. The ICG was created through an Act of Parliament in 1978.

The blueprint for a multi-dimension Coast Guard was conceived by the visionary Rustamji Committee even as the United Nations Convention of the Laws of the Sea (UNCLOS) was being negotiated and India’s assets off Mumbai high were growing.

ICG ships are being built within the country in various shipyards, including private yard in line with Government’s vision of ‘Make in India’. NSA was impressed to witness the ICG OPV Sajag.

ICG is a multifarious force, undertaking concurrent operations and being the first responder for any developing situation at sea. Their personnel work in very diverse conditions and circumstances to safeguard the vast coastline.