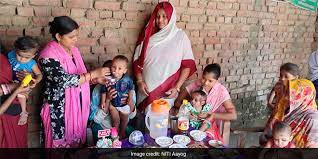 Sikkim was the best performer among the small states. The report titled ‘Preserving Progress on Nutrition in India: Poshan Abhiyan in Pandemic Times’ further said that 12 out of 19 large states had an implementation score of over 70 per cent.

While Dadar and Nagar Haveli and Daman and Diu topped among Union Territories (UTs), Punjab and Bihar were the lowest performers among larger states in terms of the overall implementation of Poshan Abhiyaan, as per the government think tank report.