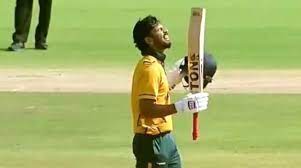 Rituraj Gaikwad smashes 7 sixes in an over to make world record: At the 49th over of Maharashtra’s Vijay Hazare Trophy quarter-final against Uttar Pradesh in Ahmedabad, Gujarat, Ruturaj Gaikwad struck a world record seven sixes. In the quarter-finals, Rituraj Gaikwad of Maharashtra became the first batsman in List-A cricket to hit 7 sixes in one over.  Gaikwad made this record against Uttar Pradesh in Ahmedabad. He remained unbeaten after scoring 220 runs off 159 balls. This is his first double century in List-A cricket, before that 187 not out was his best score. His sixth century in the past eight innings of the Vijay Hazare Trophy. In the 49th over of the innings, he scored 43 runs including 7 sixes on left arm spinner Shiva Singh.

On the first ball, Rituraj hit a six over long-on, on the second ball he also hit a straight six, on the third ball he hit a six on the leg side to complete the hat-trick, on the fourth and 5th ball he hit a six over mid-off, the 5th ball was also a no ball This is the most expensive over in List-A cricket, with a total score of 43 runs. Batsmen who have hit six sixes in an over include Sir Garfield Sobers, Ravi Shastri, Herschelle Gibbs, Yuvraj Singh, Ross Whiteley, Hazratullah Zazai, Leo Carter, Kieron Pollard and Thisara Perera.