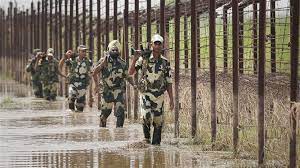 The BSF, which was established in 1965, is primarily responsible for securing India’s borders with Bangladesh and Pakistan. The Border Security Force (BSF) comprises Indian armed personnel dedicated to protecting the sovereignty and integrity along the Indo-Bangladesh and the Indo-Pakistan borders. Beginning with BSF Raising Day, personnel roll across Gujarat, Rajasthan, Punjab, and Jammu and Kashmir, securing the LoC (Indo-Pakistan border) from rogue elements attempting to enter along the western borders.

They operate in West Bengal, Meghalaya, Assam, Mizoram, and Tripura along the Indo-Bangladesh border. The jurisdictions of BSF empower them to act within 50-km of the international border in these states. BSF has an anti-Naxal HQ in Bangalore. It provides oversight to the various battalions dedicated to fighting Naxalites in the red corridor region. The BSF has played an exemplary role in counter-Naxalite and counter-insurgency operations over the last 4-decades. It also tackled counter-insurgency in the Seven Sisters states and played a vital role in eliminating anti-national elements across India.

Since its raising, the contribution of BSF to national security has a rich legacy as the brave recipient of the Mahavir Chakra. During the insurgency in 1990 over Jammu and Kashmir, BSF played a crucial role in limiting it from spreading to the neighbouring states of Himachal Pradesh and Punjab.