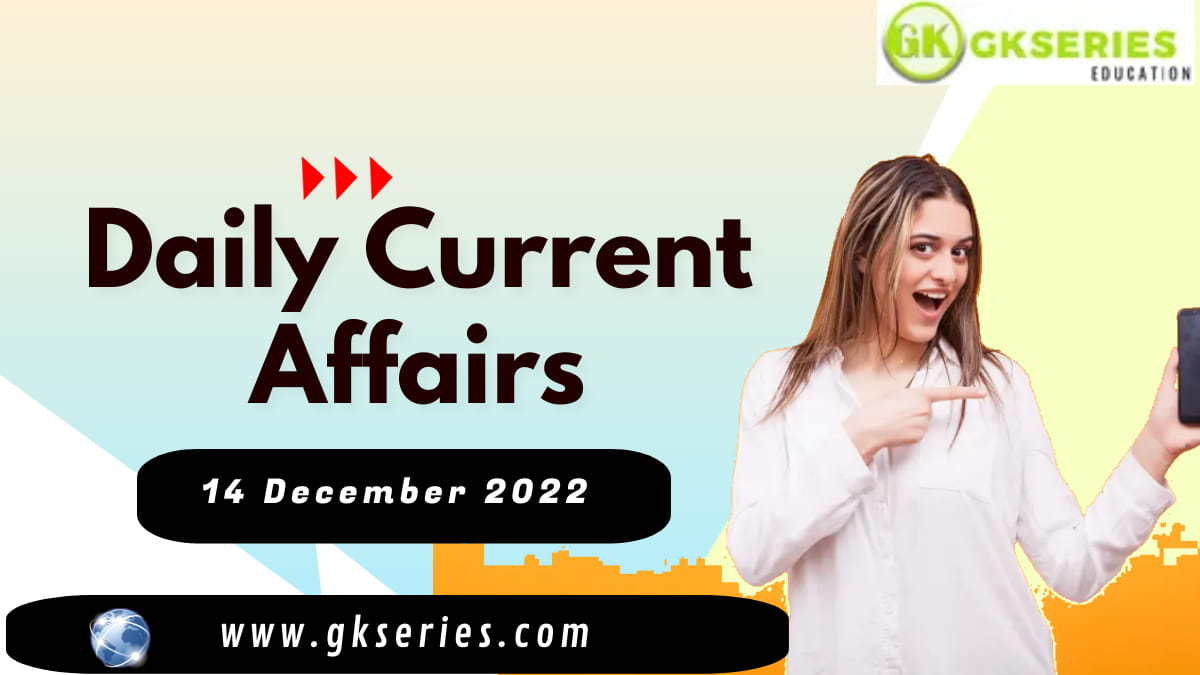 Current Affairs is the most important area in all competitive exams. But the difficulty level is very high. That’s why; many aspirants get confused, how to select Current Affairs for Preparation of Competitive Examination? In this Post, Daily Current Affairs 14 December 2022, we have tried to cover each and every point and also included all important facts from National/ International news that are useful for upcoming competitive examinations such as UPSC, SSC, Railway, State Govt. etc.

Observances and Common Holidays of India 2023

National Energy Conservation Day 2022: The 14th of December 2022 is designated as National Energy Conservation Day each year. The objective is to highlight the nation’s achievements in energy conservation and efficiency. This occasion has been celebrated since 1991 when is led by the Ministry of power. This day is observed to raise public awareness about energy saving, which is the best method to ensure a more sustainable and promising future.

The National Energy Conservation Awards were established in 1991 by the Bureau of Energy Efficiency (BEE), a division of India’s power ministry, to honour businesses and institutions that had reduced their energy consumption while maintaining production.On December 14, 1991, the awards were presented for the first time. Since then, the day has been declared as National Energy Conservation Day. These awards are given away by eminent dignitaries at a function organised every year on the same day.

BEE spearheads the celebrations on National Energy Conservation Day every year. The primary objective to celebrate the day is to drive mass awareness about the importance of energy efficiency and conservation. Conservation of energy will reduce the strain on the environment and bring down electricity and expanses.

The main attractions of the event will be:

About the ‘EV-YATRA PORTAL’ and Mobile App:

Bureau of Energy Efficiency has developed a Mobile Application to facilitate in-vehicle navigation to the nearest public EV charger, a website to disseminate information on various central and state-level initiatives to promote e-mobility in the country, and a web-portal to enable CPOs to register their charging details securely into the National Online Database.

The “EV Yatra” mobile application was created to make it easier to go to the closest public EV charger while driving. The Google Play Store and Apple Store both offer quick download and installation options for this mobile application for both iPhone and Android smartphones.

The five names recommended for elevation:

What is a Collegium System?

One of the key concepts in understanding the appointment of Supreme Court judges and the judicial system is the Supreme Court’s Collegium System. It is the system of appointment and transfer of judges that has evolved through judgments of the SC, and not by an Act of Parliament or by a provision of the Constitution.

One Of The Longest Expressway:

One of India’s longest expressways, the 701 Km route travels through Amravati, Aurangabad, and Nashik as well as 10 districts in Maharashtra at a cost of nearly Rs 55,000 crore. The expressway will also help improve the connectivity of adjoining 14 other districts, thus helping in the development of about 24 districts of the state including the regions of Vidarbha, Marathwada and North Maharashtra.

Samruddhi Mahamarg will be a game-changer in providing a major boost to the economic development of Maharashtra.

Prime Minister will lay the foundation stone of the project for pollution abatement of river Nag at Nagpur. The project, which is a part of the National River Conservation Plan (NRCP), will cost more than Rs 1925 crore to implement. In February 2019, the Prime Minister officially broke ground on the “Centre for Research, Management and Control of Haemoglobinopathies, Chandrapur” to address this problem.  Prime Minister will now dedicate to the nation the Centre, which is envisaged to become a Centre of Excellence for innovative research, technology development, human resource development, in the field of haemoglobinopathies, in the country.

In November, Retail inflation eased below 6% for the first time in 2022

Since January, retail inflation has exceeded the Reserve Bank of India’s 2%–6% tolerance band, resulting in a 225 basis point increase in interest rates, bringing the rate to 6.25% as of this writing.  Excluding the volatile food and energy components, the core inflation is estimated to be between 6% and 6.26% in November, Compared to 5.9% to 6.3% in October, three economists’ estimates for this month’s GDP.

RBI recently wrote a letter to the government explaining the reasons for failing to contain inflation within the set band for three successive quarters. The letter has not been made public so far. India’s retail inflation decreased to 5.88% in November from 6.77% in October due to falling vegetable and edible oil prices. This is the first time since January of this year that consumer price growth has been slower than the 6% tolerance level established by the central bank.

Consumer food price inflation eased to an 11-month low of 4.67% from above 7% in October, but rural consumers still had to bear a heavier burden with a 5.2% price increase in food items compared to their urban counterparts’ 3.7% increase. Overall rural retail inflation also stayed high at 6.09%.

Ex-Vice President Venkaiah Naidu receives SIES award for public leadership: Venkaiah Naidu, a former vice president, has received the 25th Sri Chandrasekarendra Saraswathi National Eminence Award (SIES). During the celebration in Mumbai, Maharashtra’s King’s Circle’s Shanmukhananda auditorium, the award was given out. The awards are given in the fields of public leadership, community leadership, science and technology, and social thinkers who have made outstanding contributions in their respective fields. In 1932, M. V. Venkateshwaran founded the SIES in Mumbai.

Other Awardees in various categories:

Venkaiah Naidu served as India’s 13th vice president from August 11 of 2017 to August 11 of 2022.  He served as the minister of housing, urban development, urban poverty alleviation, and information before joining Modi’s Cabinet. He was a prominent leader of the Bharatiya Janata Party (BJP) and its National President from 2002 to 2004. From 1996 until 2002, he was the Minister of Rural Development in the Atal Bihari Vajpayee government.

In 1998, SIES established the Sri Chandrasekarendra Saraswathi National Eminence Award in honour of the late seer of Kanchi.  This award is given annually in the field of Public eminence, Community leadership, Science and Technology, Social thinkers and the International category. SIES was set up in 1932 by M. V. Venkateshwaran in Mumbai, Maharashtra.

He is popularly known as yogi Rishi Aurobindo. He was a revolutionary, nationalist, poet, educationist and philosopher.

Birth:  On August 15, 1872, Shri Krishnadhan Ghosh gave birth to him in Calcutta. A rich doctor from Calcutta was his father.

At the age of seven he was taken to England for education. He studied King’s College in Cambridge as well as St. Paul’s School in London when he was there.

He also joined a revolutionary society and took a leading role in secret preparations for an uprising against the British Government in India.

He was a journalist as well, and his first philosophical publication, Arya, came out in 1914.  Among his many writings are The Life Divine, The Synthesis of Yoga and Savitri.

Oscar Nominations 2023: The 95th Oscar Awards will be announced and the Oscar nominations 2023 will include Best Actors, Actress, and Films. By December 21st, 2022, the school will also issue 10 categories. The other categories for the 2023 Oscar nominations include three short films, international features, makeup and hairstyling, documentaries, and features (Animated, Documentary, and Live action).

The first Oscar Award event was organized in 1929 and the trophy was designed for the first time in 1927. It is a prestigious award given to all actresses and actors all over the world for their performance in the film industry. The 2023 Oscars will take place on March 12, 2023. The Dolby Theatre in Los Angeles, California, USA, will host the 95th Academy Awards ceremony.

The decision to recruit 8,400 Punjab Police in four years was approved after the Cabinet meeting by Chief Minister Bhagwant Mann. Every year, the government will hire young people to fill the positions of constables and sub-inspectors in the Punjab Police department.

Punjab Cabinet for the recruitment of 8,400 cops

The Punjab cabinet has approved the recruitment of 1800 constables, and 300 sub-inspector every year. This decision came after recognizing the scarcity of employees.

2.05 lakh applicants are anticipated to apply for the open posts, and 2,100 posts will be added annually. The candidates will be given ample time to be involved in their academics and improve their physique for clearing the tests.

The Punjab cabinet aims to channelize the energy of youth in a positive direction. The fixed schedule for the advertisement, conduct, and declaration of results for exams, will be adopted soon. As per schedule, the advertisement for the exam will be issued in January. Every year, the written exams are given in the months of May and June, the physical exams are given in the month of September, and the results are released in the month of November. The recruitment process for the 710 open patwari positions in the revenue department has also been given the Cabinet’s clearance.

The Punjab Cabinet also approved the department of Higher education and languages to hire 203 employees for NCC HQs units and centers. This will help in addressing the issue of shortage of manpower in National Cadet Corps (NCC) units. This will also facilitate the enrolment of a higher number of candidates further.

Justice Datta, 57, will retire from the Supreme Court in February 2030 at the age of 65 after serving for almost eight years. His name was recommended by a Supreme Court Collegium led by Justice U.U. Lalit on September 26.The pendency of his file with the government for well over two months had been a source of consternation for both the Supreme Court and the apex court lawyers’ community.