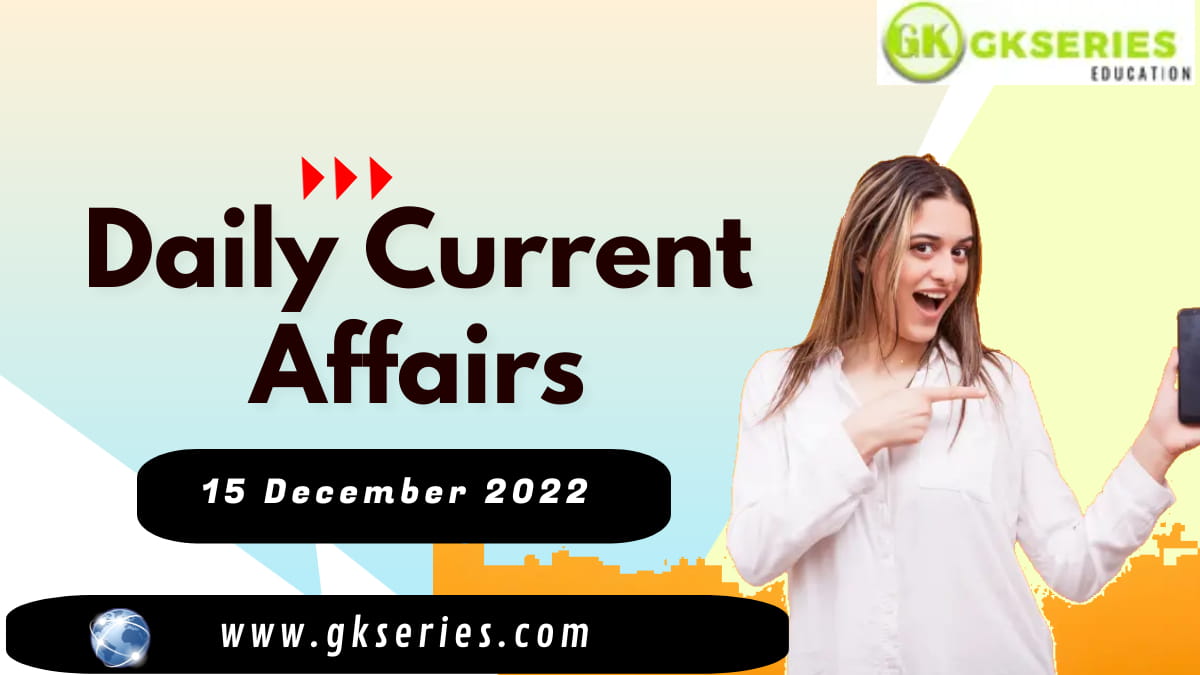 Current Affairs is the most important area in all competitive exams. But the difficulty level is very high. That’s why; many aspirants get confused, how to select Current Affairs for Preparation of Competitive Examination? In this Post, Daily Current Affairs 15 December 2022, we have tried to cover each and every point and also included all important facts from National/ International news that are useful for upcoming competitive examinations such as UPSC, SSC, Railway, State Govt. etc.

PAK vs ENG: Joe Root, a former captain of England, became just the third player in history to score 10,000 runs and 50 wickets in Test cricket. He achieved the feat during the ongoing second Test against Pakistan in Multan. At the Multan Cricket Stadium, Root reached the milestone when he struck out Faheem Ashraf in Pakistan’s second innings. It was a tossed-up delivery from the off-spinner and Faheem tried to push at it. The ball turned very little to take the batter’s edge and presented a simple catch to Zak Crawley at slips.

Root joins former Australian skipper Steve Waugh and South African icon Jacques Kallis in scoring 10,000 runs and 50 wickets in the longest format. Root currently has 10629 Test runs and 50 wickets under his belt. Waugh has 10927 runs and 92 wickets, while Kallis tops the chart with 13289 runs and 292 wickets.

The TPL Plus, the grassroots league of the Tennis Premier League that allows young tennis athletes a platform to learn from international and Indian stars was won by Mumbai Leon Army. The winning team received ten lakh rupees, while the losing team received five lakh. Conny Perrin was declared the “player of the match” in the final, while the honour went to Sriram Balaji and Jeevan Nedunchezhiyan in the two semifinals.

ADB Keeps India’s GDP Growth Unchanged at 7%: The Asian Development Bank, based in Manila, maintained its projection for India’s economic growth for the fiscal years 2022–2023 at 7%. The bank also forecasted a weaker-than-previously expected pace for developing Asia. As opposed to 8.7% GDP growth in the previous fiscal year, the seven percent growth projection for fiscal 2022–23 is unchanged from its September forecast.

For the next fiscal year, FY 23-24, the GDP growth has been kept unchanged at 7.2 percent, “sustained by positive effects from structural reform and from public investment catalysing private investment”.

According to a report from the Manila-based bank, Asia’s economy would grow by 4.2 percent this year and 4.6 percent in 2023. The previously estimated expansion stood at 4.3 percent and 4.9 percent, respectively.

What The Report Pointed:

“While some recent high-frequency indicators are more favourable than expected — notably consumer confidence, electricity supply and purchasing managers’ indexes — others are a little less favourable, in particular exports, largely textiles and iron ore, and the index of industrial production of consumer goods,” the report said.

According to the report, inflation in the nation is still expected to rise to 6.7 percent in 2022–2023 before declining to 5.8 percent.

“In India, the economy grew by 6.3 percent in the second quarter (July-September) of the fiscal year 2022-23, reflecting contraction in public consumption of 4.4 percent even as exports grew by 11.5 percent despite the global slowdown,” ADB said.

On the supply side, the increase was led by the 9.3% increase in the service sector, which added 4.6 percentage points to GDP growth. Industry, by contrast, suffered a small contraction by 0.8 percent, dragged down by contraction in manufacturing and mining, ADB added.

The Asian Development Bank is a regional development bank (ADB) established on 19th December 1966. It is headquartered in Manila, Philippines.

It was formed as a result of a resolution passed at the first Ministerial Conference on Asian Economic Cooperation held by the United Nations Economic Commission for Asia and the Far East (ESCAFE) in 1963.

ADB is contributing to India’s fast, green and inclusive recovery from Covid 19, with investments in infrastructure, small enterprise development and social sector.

Some of the projects assisted by ADB include:

a credit agreement for USD 96.3 million to strengthen the state of Himachal Pradesh’s sanitation and water delivery systems.  A $500 million loan to expand the metro rail network in Bengaluru. A USD 4.5 million Project Readiness Financing (PRF) loan to support urban mobility in Mizoram.

Forest department launched Project ‘Vanikaran’ in Kerala: To eradicate invasive species, particularly Senna spectabilis, and restore natural forests, the Forest department and Noolpuzha grama panchayat have launched the “Vanikaran” (afforestation) project. The project was being executed on 30 hectares of forestland under the Sulthan Bathery forest range of the Wayanad Wildlife Sanctuary, where exotic invasive plants, including Senna spectabilis, Eupatorium, Mikania micrantha, and Lantana camara, were posing a serious threat to the local species of trees, S. Ranjith Kumar, Assistant Wildlife Warden of the sanctuary.

WHO names Sir Jeremy Farrar as its new chief scientist

WHO names Sir Jeremy Farrar as its new chief scientist: WHO has announced that Dr. Jeremy Farrar will take over as its new Chief Scientist. As of right now, Dr. Farrar is the Director of the Wellcome Trust. He will join WHO in the second quarter of 2023.As WHO’s Chief Scientist, Dr Farrar will oversee the Science Division, bringing together the best brains in science and innovation from around the world to develop and deliver high quality health services to the people who need them most, no matter who they are and where they live.

About the Dr Farrar:

Dr Farrar is a clinician scientist who, before joining Wellcome in 2013, spent 17 years as Director of the Clinical Research Unit at the Hospital for Tropical Diseases in Viet Nam where his research interests were in global health with a focus on emerging infectious diseases. Dr Farrar is a Fellow of the Academy of Medical Sciences UK, European Molecular Biology Organisation (EMBO), the National Academies USA and a Fellow of The Royal Society.

Hermaszewski travelled into space as part of the Soviet Union’s Intercosmos program, which offered an opportunity to explore space for countries within the then-Eastern Bloc, under Moscow’s domination or which had ties with the Soviets.

Vladimir Remek of the former Czechoslovakia launched first as part of the programme in March 1978. Hermaszewski followed, while Sigmund Jahn of then-East Germany was the third to fly that year.

They all trained at the Star City space flight preparation facility outside Moscow. Hungary, Bulgaria, Cuba, Vietnam, Mongolia, Romania, Syria, Afghanistan, and India were some of the other nations who provided cosmonauts. Later, France joined the initiative and sent Jean-Loup Chretien in 1982.

The Chief Minister Basavaraj Bommai inaugurated a Namma Clinic at Bhairidevarakoppa in Hubballi of Dharwad district in the presence of Health Minister K Sudhakar, among others.

Twelve types of health services will be available at these centres free of cost, and each clinic will consist of a medical officer, a nurse, lab technician, and a Group D employee, an official statement had said earlier. The government is working to operationalise all 438 Namma clinics across the state soon and all the remaining ones will be operational by January 2023.

A total of 243 of Namma Clinics will be functioning under the Bruhat Bengaluru Mahanagara Palike (BBMP) area, and work is underway to make them operational for public service by January second week, a statement said.

Each Namma Clinic is expected to cater to a population of 10,000 to 20,000. The 12 kinds of services include pregnancy, postnatal, neonatal care, childhood and adolescent care, universal immunisation services, family welfare, contraceptive, infectious disease management, common and minor ailment care and diabetes, it added.

Messi announced retirement after Qatar FIFA 2022 : Argentina football player, Lionel Messi has confirmed that he will retire after the FIFA World Cup 2022 final on December 18. The Argentina captain, who scored from a penalty and played equally important in the other two goals scored by Julian Alvarez against Croatia to take his country to the final, said the summit clash will be his last in the sky and white stripes.

He is playing at his fifth World Cup (FIFA 2022) and has surpassed Diego Maradona and Javier Mascherano. With his fifth goal in Qatar FIFA 2022, he has also surpassed Gabriel Batistuta as the top Albiceleste scorer at World Cups, netting 11 times. He led Argentina to the final in the 2014 edition as well.10:52 AM.

The PSG forward put on a show for a capacity crowd at Lusail Stadium in Qatar which many described as his best in recent times. This will be Messi’s last chance to lift the World Cup before calling it quits. He had ended up as a runner-up after losing to Germany in 2014 in Brazil.

” The Ukrainian individuals are dealing with alarming troubles in all markets vital to life: power supply, food safety, water system, and accessibility to healthcare. This scenario is worsened by the onset of winter and by the increased Russian bombardments versus civilian infrastructures in Ukraine, especially power facilities, causing severe blackouts,” the declaration checks out.

” The goal of the meeting is as a result to summon global altruistic help to boost the Ukrainian people’s resilience through the severe winter months, and also develop a sychronisation mechanism to make sure reliable and needs-based delivery of aid,” the declaration added.

He is best known for his role in TV show ‘Baal Veer’. The ‘dearMoon’ project was first announced in 2017 and it is the first civilian mission to the Moon. Japanese billionaire, Yusaku Maezawa, who has purchased all the seats in 2018, has revealed the name of the eight people who will be joining him for this trip.

Taking to Instagram, Mr Joshi, the star kid who featured in the TV serial ‘Baal Veer’, said he is “proud to be part of such an extraordinary, unbelievable, once-in-a-lifetime project”. “Life has always surprised me with new opportunities & this is the biggest one I can ever think of!” he wrote. “I am proud to represent my Beautiful country India at global scale in this Universal project,” Mr Joshi added.