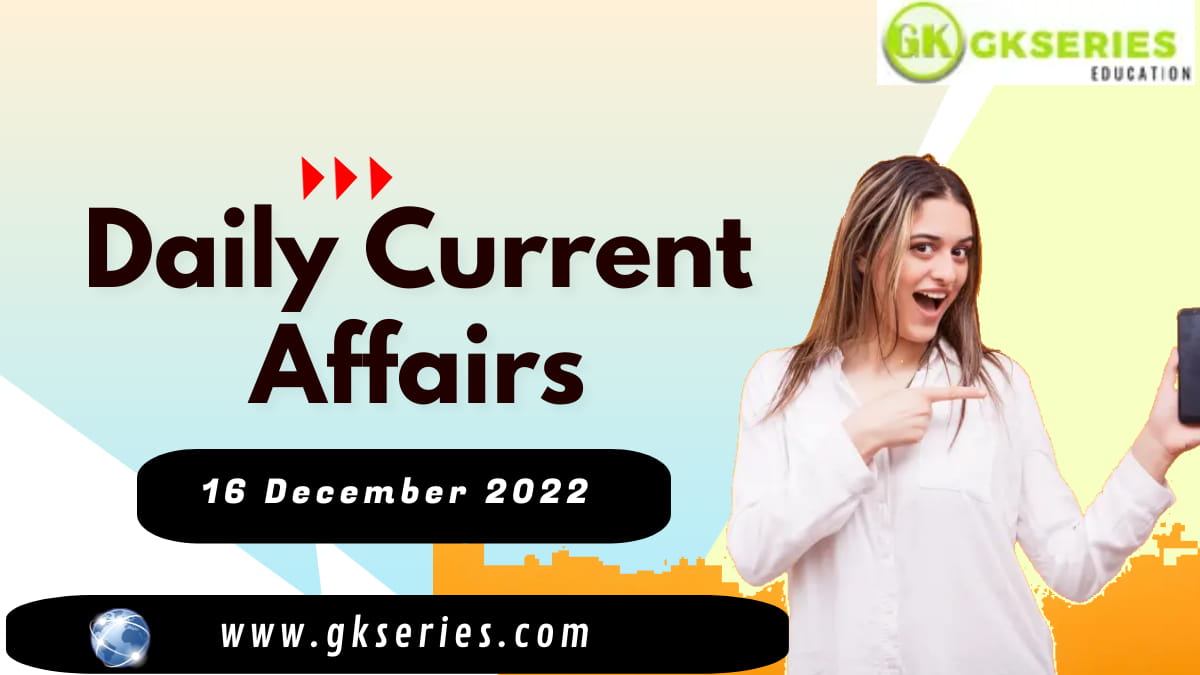 Current Affairs is the most important area in all competitive exams. But the difficulty level is very high. That’s why; many aspirants get confused, how to select Current Affairs for Preparation of Competitive Examination? In this Post, Daily Current Affairs 16 December 2022, we have tried to cover each and every point and also included all important facts from National/ International news that are useful for upcoming competitive examinations such as UPSC, SSC, Railway, State Govt. etc.

Global Trade Surges to $32 Trillion Record in 2022 Says UN: A UN assessment that predicted a slowdown into 2023 predicted that the value of global trade would increase by approximately 12% this year to a projected $32 trillion, setting a new high. “The substantial trade growth during the last year was largely due to increases in the value of the trade of energy products,” the United Nations Conference on Trade and Development said in the report.

Trade in merchandise goods soared to $25 trillion, an increase of about 10 per cent versus the prior year. According to the research, trade in services increased by 15% on a yearly basis to close to $7 trillion.

The UN body expects the inflation-adjusted value of global trade will diminish next year because of the combined impact of geopolitical frictions, lower economic growth, higher prices for goods and record levels of global debt.

About The Growth Prospects:

Weaker economic growth and inflation are likely to hamper international commerce in the year ahead. “While the outlook for global trade remains uncertain, negative factors appear to outweigh positive trends”.

G-7 Agrees $15.5B Energy Deal with Vietnam to Cut Emissions

G-7 Agrees $15.5B Energy Deal with Vietnam to Cut Emissions: A pact to give Vietnam $15.5 billion to help the Southeast Asian country move faster from coal power to renewable energy and reduce its climate-damaging pollution was approved by a group of nine rich industrialised nations.

The Group of Seven major economies, along with Norway and Denmark, said in a statement that the aim is to help Vietnam reduce its emissions to “net zero” by 2050, a goal which expert say needs to be met globally to cap global warming at 1.5 degrees Celsius.

Developing and developed countries are negotiating a series of agreements, including the Just Energy Transition Partnership with Vietnam. The first such deal was signed with South Africa last year, and a similar agreement was reached with Indonesia last month.

Significance Of This Move:

Vietnam is a dynamic, emerging economy at the heart of Southeast Asia,” British Prime Minister Rishi Sunak said. “The investment we are making today means the country can cut its emissions while simultaneously creating new jobs and growth.

The $15.5 billion of funding will come from public and private sources over the coming three to five years, much of it in the form of loans, according to the agreement.

By using the money to expand its electricity grid and increase renewable energy production, Vietnam will be able to bring forward its target for peaking emissions from 2035 to 2030. Additionally, the country will increase its forecast 36% share of renewable energy in power by 2030 to 47%.

The G7 or the Group of Seven is a group of the seven most advanced economies. The seven nations are France, Germany, Japan, the United States, Canada, and the United Kingdom.

It started out in 1975. Annual G7 summits are held to discuss issues like international security, energy policy, and global economic control. All the G7 countries and India are also the part of G20. The G7 does not have a fixed headquarters. The UK currently chairs the G7 and has invited India along with Australia, the Republic of Korea and South Africa as guest countries for the G7 summit.

‘RRR’ follows a pre-Independence story woven around two real-life Indian revolutionaries: Alluri Sitarama Raju and Komaram Bheem, in the 1920s. The movie, which starred Ram Charan and Jr. NTR, was released in five different languages internationally in March. RRR is the only Indian film to make the final five out of a clutch of other entries from India, among them Gangubai Kathiawadi, Kantara and Chhello Show.

Other Important facts about RRR:

Earlier, there was a demand to send the film to Oscars as well, however, due to the official entry in that award function, this film was left behind. The New York Film Critics Circle Best Filmmaker Award was recently given to director SS Rajamouli for the movie. ‘RRR’ is the only Indian film to make it to the International Award category. RRR has been released in many languages, this South film is being appreciated globally.

HDFC Bank Partners with Startup India for Parivartan SmartUp Grants: The flagship programme of the Indian government’s “Startup India” initiative, in cooperation with HDFC Bank, has announced the beginning of its sixth annual grants programme for social startups. Known as Parivartan SmartUp Grants, the program aims to identify startups working in the social impact space and support them through monetary grants to their incubators.

The grants have been offered under the aegis of Parivartan, the umbrella name for the bank’s social initiatives. So far, the bank has disbursed over INR 30 crore to more than 45 incubators which supported over 165 startups working in areas like environment, agri-business, ed-tech, waste management, healthcare, and skill development sectors.

The bank has been enabling startups through its state-of-the-art SmartUp program, which provides specialised banking and value-added services to entrepreneurs. Through the bank’s well-known and highly sophisticated smart financial tools, consulting services, and technology, it seeks to help startups achieve their goals.

Extent Of These Initiatives:

Through various CSR initiatives, It has impacted the lives of over 9.6 crore people across the country. It aimed to achieve positive change in people’s lives through direct and indirect interventions through Parivartan, empowering them to become self-sufficient and integrated into society. By announcing partnership with Startup India for the 6th Parivartan SmartUp Grants which would help socially conscious businesses to achieve their vision and mission.

ISRO is doing to boost the use of NavIC, India’s version of GPS

What are the changes ISRO is making in NavIC:

NavIC, or Navigation with Indian Constellation is an independent stand-alone navigation satellite system developed by the Indian Space Research Organization(ISRO). NavIC received its initial approval in 2006. It was expected to be completed by late 2011 but only became operational in 2018. NavIC consists of eight satellites and covers the whole of India’s landmass and up to 1,500 km from its boundaries.

Where is NavIC used currently:

Currently, NavIC’s use is limited. It is being used in public vehicle tracking in India, for providing emergency warning alerts to fishermen venturing into the deep sea where there is no terrestrial network connectivity, and for tracking and providing information related to natural disasters.

How does NavIC work compared to other satellite navigation systems like GPS:

The organising committee announced the appointment on Tuesday after engaging with 50 candidates over six months.

She had stepped away from her role as CEO of Deloitte Asia Pacific earlier this year. Hook was based in Singapore as CEO of Deloitte Asia Pacific until June and had previously worked for the international professional services network in the US and in Australia, moving to Sydney in 2009 to lead the auditing practice for six years and later becoming CEO of the Australian operation in 2015. The International Olympic Committee awarded the 2032 Games to Brisbane in July of last year.

”The opportunity to lead the Olympics and Paralympics is once in a lifetime,” Hook said. ”The idea of setting up the organisation, building the team, creating a vision and driving to a smooth delivery of Brisbane 2032 is very exciting and I expect it will be both challenging and rewarding.

Prior to this role, he served as the Chief Executive Officer of Big Bazaar, where he was responsible for retail operations, organizational transformation, and business strategy execution. Recently, the DealShare startup owned and operated by Merabo Labs Pvt Ltd has raised an additional $45 million from Abu Dhabi Investment Authority (ADIA).

US Wildlife officials declare ‘Nevada wildflower’ as endangered species: In the United States, wildlife officials declared a Nevada wildflower endangered at the only place it’s known to exist – on a high-desert ridge where a lithium mine is planned to help meet the growing demand for electric car batteries. The Fish and Wildlife Service has formally listed Tiehm’s buckwheat and its accompanying area of 910 acres for the 6-inch-tall flower with yellow blooms. With an estimated remaining population of only about 16,000 plants, the service concluded that Tiehm’s buckwheat is on the brink of extinction.

Ioneer (Australian mining company) is planning to dig for lithium where the flower grows. The service’s final listing rule will be published in the Federal Register. Federal agencies are prohibited from approving any activity on federal lands that could destroy, modify or adversely affect any listed species’ critical habitat.

Kerala has been awarded five GI tags for its agricultural produce. With this, the total number of GI tags in India comes to 432. Top five states holding the maximum number of GIs are Karnataka, Tamil Nadu, Uttar Pradesh, Karnataka, and Kerala.

What is GI Tag?

The summit is being organized from 15th to 17th December, 2022 at Dr. Ambedkar International Centre, New Delhi by National Mission for Clean Ganga (NMCG) and Center for Ganga River Basin Management and Studies (cGanga) to impart impetus towards developing water and environmental infrastructure to protect rivers and water bodies in India.

2022 Theme: Restoration and Conservation of Small Rivers in a Large Basin.

Focus: On the select aspects of ‘Mapping and Convergence of 5Ps’ – People, Policy, Plan, Programme and Project.

Aim: To give an insight into the potential causes for divergence and formulate a strategy to achieve.

The five key elements — People, Policy, Plan, Programme and Project— and their convergence is a significant challenge towards river basin management. This is why the 7th Edition of the India Water Impact Summit aims to understand, elaborate, delineate potential causes of divergence, and formulate strategy for convergence. This will be done through collation of views expressed in Plenary Sessions, Panel Discussions, International Forums, and informal discussions through extensive engagement with the most influential players. The plenary sessions of the 7th IWIS include Restoration and Conservation of Small Rivers in a Large Basin ‘Mapping and Convergence of 5P’s, ‘Lessons from Various River Related Programmes’, ‘Bottlenecks and Course Correction in River Related Programmes’. The thematic sessions include ‘Setting the Goal to Determine Healthy Status of the Rivers’, ‘Establishing Present Condition and Norms for Bio-physical Status of Healthy Rivers in Different Stretches and Setting the Milestone’, Formulation and Execution of River Monitoring Programmes’, ‘Information/Data Collation, Utilization and Dissemination Strategy’ etc. The Summit has been divided into five broad Tracks including ‘Science and Policy’, ‘Finance and Economics’, ‘Technology and Innovation’, ‘International’ and ‘Implementation Challenges’.