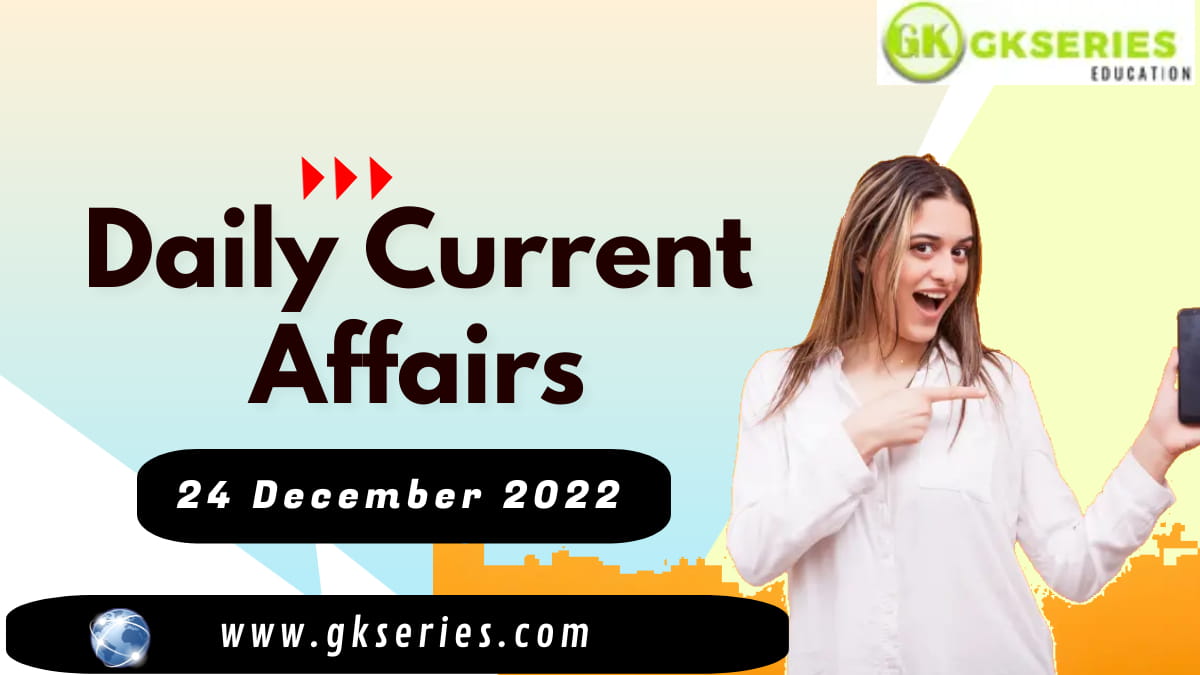 Current Affairs is the most important area in all competitive exams. But the difficulty level is very high. That’s why; many aspirants get confused, how to select Current Affairs for Preparation of Competitive Examination? In this Post, Daily Current Affairs 24 December 2022, we have tried to cover each and every point and also included all important facts from National/ International news that are useful for upcoming competitive examinations such as UPSC, SSC, Railway, State Govt. etc.

A new project, an aviation training academy, will be led by current AirAsia India CEO Sunil Bhaskaran, according to an internal communication. After taking over loss-making Air India in January this year, Tata group has been working on consolidating its airline business. On November 2, Air India said an operational review process is underway to integrate budget carrier AirAsia India with Air India Express and the merger is likely to be completed by the end of 2023.

The Dolby Theatre in Los Angeles, California, will host the 95th Oscars on March 12, 2023. The categories were released by the academy on 21st December 2022. Read More about Oscar Nominations 2023.

Oscar Nominations from India: India has entered the 95th Oscar Awards with the nomination of Gujarati Feature Film “The Chhellow Show” or “The Last Show” for the best feature film and “Naatu Naatu” from RRR has been shortlisted for the Best Original Song. RRR is one of the successful movies by SS Rajamouli. Read more about the Indian films nominated for Oscar.

British magazine’s list of 50 greatest actors: Bollywood superstar, Shah Rukh Khan has become the only Indian to be named in an international list of 50 greatest actors of all time by a prominent British magazine. The 57-year-old actor is listed alongside Hollywood heavyweights like Denzel Washington, Tom Hanks, Anthony Marlon Brando, Meryl Streep, Jack Nicholson, and many others on Empire magazine’s list.

GRIHA Exemplary Performance Award 2022: A top national level Green Building Award, the GRIHA Exemplary Performance Award 2022, has been won by the Unique Identification Authority of India (UIDAI). UIDAI HQ has been declared a winner among the existing highest rated building category. UIDAI believes and promotes the idea of recycle and reuse to reduce carbon footprint. It has been harnessing solar power to meet a portion of its energy consumption. It is recycling and reusing water and has been adhering to sustainable waste management practices.

GRIHA (Green Rating for Integrated Habitat Assessment) is a national rating system for green buildings in India. The nominations for this award were invited in the month of October 2022 from GRIHA rated buildings across the country. UIDAI HQ building participated in the said competition in which 100 point rating system was considered across 34 criteria.

YouTube creators contributes over Rs 10,000 cr to India’s GDP: In 2021, the creative ecosystem of YouTube, which is owned by Google, was expected to sustain more than 750,000 full-time equivalent employment in India and contribute more than Rs 10,000 crore to the GDP of the country, according to a statement made on Monday by YouTube. The business also disclosed that Courses, a new product that will provide viewers a greater learning experience and creators a new opportunity to monetize their work, would launch in beta in 2023.

According to YouTube, other businesses will develop academic and practical courses in many Indian languages during the beta phase, including LearnoHub, Speak English With Aishwarya, and Telusko.

Sania Mirza of UP Passes the NDA Exam: Sania Mirza, a resident of Mirzapur and the daughter of a TV mechanic, passed the entrance exam for the National Defense Academy with flying colours (NDA).Sania Mirza is from the Jasovar village, which is within the jurisdiction of the Mirzapur Dehat Kotwali Police Station.

Who is Sania Mirza, an NDA girl from UP?

Kashmir’s Harshest Winter Period Chillai Kalan Begins: With the onset of winter solstice, one of the harshest winter periods of 40 days, called Chillai Kalan, has begun in Kashmir. Major cold is what the Persian phrase “Chillai Kalan” means. With Kashmir’s mountains buried in snow for weeks and the famed Dal Lake hitting freezing point, the continuing cold wave is thought to have reached its height.

With maximum chances of snowfall during this period, sub-zero temperatures in the region make people in the hill areas carry firewood to their houses in large quantities that will be burnt and used for heating and cooking food. It is said the snow during the period lasts longer and replenishes the streams, rivers and lakes of Kashmir.

The 40-day harshest winter period known as “Chilla-i-Kalan” has arrived in the Kashmir valley, with Srinagar experiencing its coldest night of the season. The ‘Chilla-i-Kalan’ is the 40-day harshest winter period when a cold wave grips the region and the temperature drops considerably leading to freezing of water bodies, including the famous Dal Lake here as well as the water supply lines in several parts of the valley.