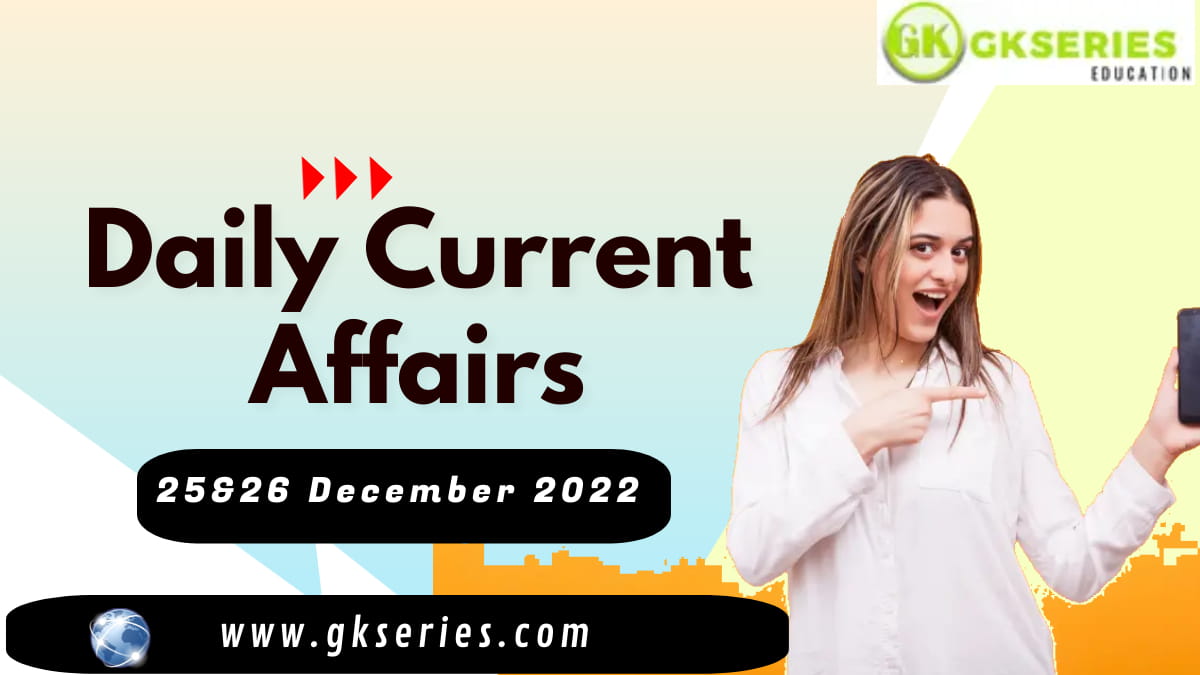 Current Affairs is the most important area in all competitive exams. But the difficulty level is very high. That’s why; many aspirants get confused, how to select Current Affairs for Preparation of Competitive Examination? In this Post, Daily Current Affairs 25&26 December 2022, we have tried to cover each and every point and also included all important facts from National/ International news that are useful for upcoming competitive examinations such as UPSC, SSC, Railway, State Govt. etc.

CPN-Maoist Centre Chief Pushpa Kamal Dahal Prachanda Set to Become New Nepal PM: In a swift move, CPN-Maoist Centre chief Pushpa Kamal Dahal, also known as Prachanda, mustered the support of 168 parliamentarians, way above the magic mark of 138 in the House of Representatives, clearing the way for his third stint in the Nepal Prime Minister’s Office in the last 14 years. Prachanda was named prime minister in accordance with Article 76 (2) of the constitution by President Bidya Devi Bhandari.

More About This Transition:

After he snapped ties with the ruling coalition led by Sher Bahadur Deuba, Prachanda went to the President’s office in the company of KP Sharma Oli, chief of the Communist Party of Nepal – Unified Marxist Leninist (UML), with a list of supporters from seven political parties.

Since the 239-year-old monarchy was abolished in 2008, there have been ten government transitions in Nepal.

Along with the UML and the CPN-Maoist Centre, the Rastriya Prajatantra Party, Rastriya Swatantra Party, Janata Samajbadi Party, and regional organisations like Jamat Party and Nagarik are among the parties that support Prachanda.The list was submitted well within the deadline President Bidhya Devi Bhandari had set for claimants to form the government.

Prachanda has support of 165 lawmakers in the 275-member House of Representatives which includes CPN-UML with 78, CPN-MC with 32, RSP with 20, RPP with 14, JSP with 12, Janamat with 6 and Nagarik Unmukti Party with 3.

Prachanda spent nearly 13 years underground after being born on December 11, 1954, in Dhikurpokhari, Kaski district, close to Pokhara.  He joined mainstream politics when the CPN-Maoist adopted peaceful politics, ending decade long armed insurgency. He led the decade-long armed struggle from 1996 to 2006 that ultimately ended with signing of the Comprehensive Peace Agreement in November 2006.

A Boost To Made In India: Aatmanirbhar Bharat Concept:

It is important to note that 21 proposals totaling Rs 82,127 crore (97.4%) have been accepted for procurement from domestic sources. This unprecedented initiative of DAC will not only modernise the Armed Forces but also provide a substantial boost to the defence industry to achieve the goal of ‘Aatmanirbhar Bharat’.

About The Capital Procurement For The Defence Forces:

List of 15 highest paid female athletes of the year:

Fiji: More than two decades after the former military leader initially held the position in a period of nearly seven years, Sitiveni Rabuka was officially announced as Fiji’s new prime minister.The 74-year-old won the nomination by one vote over incumbent Frank Bainimarama at a sitting of the Fijian Parliament in Suva. It also signals the end of former Prime Minister Frank Bainimarama’s 16 years in power. Sitiveni Rabuka received 28 votes in the 55-member Fijian Parliament, compared to Bainimarama’s 27 votes.

About the Sitiveni Rabuka:

Mr. Sitiveni Rabuka , the head of the People’s Alliance Party, was elevated to the position after forming a majority coalition with two other parties following last week’s close and contentious election. He was the instigator of two military coups in 1987. He was the democratically elected prime minister of Fiji from 1992 until 1999 and again in 2022, when he led a coalition of three parties. Additionally, from 1999 to 2001, he presided over the Great Council of Chiefs, and from 2001 to 2008, the Cakaudrove Provincial Council.

DGCA Type certification is provided on the basis of the quality check and is issued after a rigorous testing process of the unmanned aerial vehicles.

Garuda Kisan drones were qualified for Rs 10 lakh in unsecured loans from the Center’s agri-infrastructure fund because they were built for agricultural use and had gained Type Certification for the GA-AG model.

The elusive double certification by DGCA for Type and RPTO certification is a testament to the indigenous Made in India drone manufacturing capacities. In the next five months, the company will be able to produce 5,000 drones thanks to robust demand.

Rajya Sabha’s productivity during the winter session recorded at 102%

1,920 unstarred questions were answered in the 13 sittings, while 82 starred questions were resolved. After 28 hours of debate in which 160 members participated, nine bills were ultimately passed or returned during the session. Although the term “House of Elders” is not listed in the official lexicon, Vice President Jagdeep Dhankhar had noted in my opening address on December 7 that it adequately captured the significance of this institution.

The House of Elders, Rajya Sabha is expected by the nation to take a decisive, leading role in reinforcing and advancing the fundamental principles of the Republic. Rajya Sabha is also expected to be establishing the traditions of Parliamentary democracy that best represent the highest standards of deliberation and imitation, according to Jagdeep Dhankhar.

Two sports science centres have been established by the state government in Udupi and Bengaluru. These centers will conduct research on medicines, nutritious food, treatment and rehabilitation measures for sportspersons, which would help them to boost their abilities. The Minister predicted that there will be numerous such sports science centres. A future date.

The Union Ministry of Youth Affairs and Sports’ Sports Authority of India (SAI) has also established a sports science centre on its premises. 21 National Centres of Excellence (NCOE) and two high performance centers (Bengaluru and Patiala). It has also set up a National Centre for Sports Sciences and Research (NCSSR) in New Delhi which is the hub of SAI Sports Science Center.

The National Centers of excellence provides specialized training in selected sports disciplines and also has a well-functioning Sports Science Center.  The National centers of Excellence are at Alleppey and Thiruvananthapuram in Kerala, Aurangabad and Mumbai in Maharashtra, Bengaluru in Karnataka, Bhopal in Madhya Pradesh, Chandigarh, Dharamshala in Himachal Pradesh, Guwahati in Assam, Gandhinagar in Gujarat, Imphal in Manipur, Itanagar in Arunachal Pradesh, Jagatpur in Odisha, Kolkata in West Bengal, Lucknow in Uttar Pradesh, Patiala in Punjab, Rohtak, Sonepat in Haryana and 5 centers in New Delhi.

The week-long ‘Governance Week’ (19-25 December 2022) celebrations with a nationwide launch of “PrashasanGaon Ki Ore” campaign also concluded on this day.

The revamped e-HRMS 2.0 is the first digital system in Government of India to provide end-to-end HR Services.

HDFC borrows USD 400 million from IFC: As part of their efforts to promote climate goals, the International Finance Corporation (IFC) has provided a loan to mortgage giant HDFC in the amount of USD 400 million for the financing of green, affordable housing units.