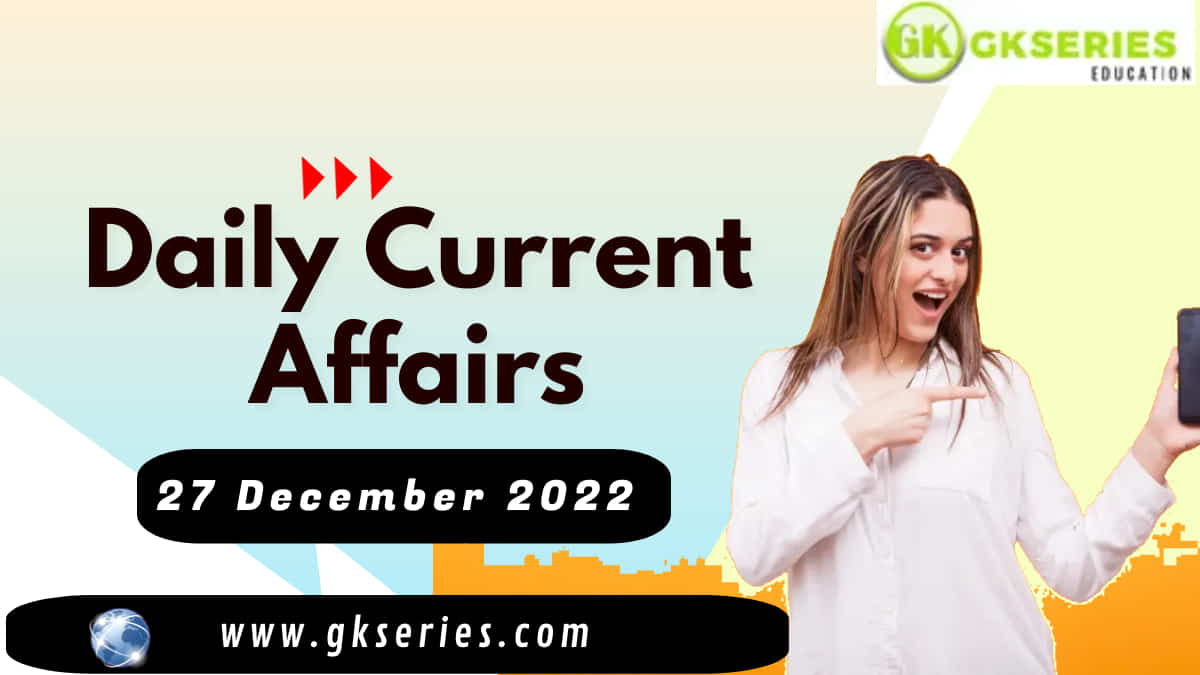 Current Affairs is the most important area in all competitive exams. But the difficulty level is very high. That’s why; many aspirants get confused, how to select Current Affairs for Preparation of Competitive Examination? In this Post, Daily Current Affairs 27 December 2022, we have tried to cover each and every point and also included all important facts from National/ International news that are useful for upcoming competitive examinations such as UPSC, SSC, Railway, State Govt. etc.

Significance Of This Development:

Jio demonstrated the benefits of 5G in the field of healthcare, through Jio Community Clinic medical kit, and the revolutionary AR-VR device, Jio Glass. These benefits will bring phenomenal changes in the lives of people in Andhra Pradesh. The launch of Jio’s True 5G services will open doors to growth opportunities in the areas of e- governance, education, healthcare, IT and SME business.

CIBIL, SIDBI, Online PSB loans launch MSME Rankings: With the intent of deepening credit flow to small businesses and also helping lenders avoid loan losses on such bets, credit information company TransUnion Cibil launched a ranking system for MSME borrowers. The “FIT Rank,” introduced by TransUnion Cibil in collaboration with Online PSB Loans, will rate the more than 6 crore micro, small, and medium-sized enterprises (MSMEs) by using input from their current accounts, income tax returns, and Goods and Service Tax (GST) returns to arrive at a score between 1-10 to rate a borrower after getting permission to draw the necessary data.

Significance Of This Ranking:

Former Maldivian President Abdulla Yameen Sentenced to 11 Years: The Maldives criminal court sentenced former president Abdulla Yameen to 11 years in prison and fined him $5 million after finding him guilty of corruption and money laundering charges related to receiving kickbacks from a private company. Yameen has denied doing anything wrong.

He was ousted from office in 2018 but has since been nominated as the Progressive Party of the Maldives’ presidential candidate for the 2023 election. Already in 2019 he was sentenced to five years in jail and fined $5 million in 2019 for embezzling $1 million in state funds, which the prosecution said was acquired through the lease of resort development rights. Yameen was placed under house arrest in 2020 after being sentenced, and he was released a few months later.

Since his release, Yameen, the half-brother of former dictator Maumoon Abdul Gayoom, has returned to active politics with a campaign against Indian influence in Maldives, raising concerns in New Delhi. Situated close to strategic shipping lanes in the Indian Ocean, Maldives is a focal point for competition between India and China over influence in the region.

Important Facts For The Competitive Exams:

Best Cuisines of the World: India is ranked fifth on the global list of the best cuisines for 2022, according to Taste Atlas. Votes from the audience for ingredients, dishes, and beverages are used to determine the ranking. The food of Italy came in first, followed by that of Greece and Spain. According to the assessment, the greatest meals in India are “garam masala, malai, ghee, butter garlic naan, keema,” which obtained a score of 4.54. The list contains 460 things in total. Furthermore, the best restaurants to try Indian cuisine are Shree Thaker Bhojanalay (Mumbai), Karavalli (Bengaluru), Bukhara (New Delhi), Dum Pukht (New Delhi), Comorin (Gurugram) and 450 others, according to the list.

Japan, the United States of America, Turkiye, France and Peru were also among the top 10 countries with best cuisines. Chinese cuisine, which is the world’s most popular, however, ranked 11th on the list.

Top 10 Cuisines in the world

International Day of Epidemic Preparedness 2022: The goal of December 27’s International Day of Epidemic Preparedness is to raise awareness of epidemics. This day encourages every individual, every institution, and every government to prepare its citizens in an appropriate manner and in accordance with national contexts and priorities, through education and awareness-raising activities, in order to highlight the importance of the prevention of, preparedness for, and partnership against epidemics.

The International Day of Epidemic Preparedness reminds us what we went through during the two years of peak-COVID infections. Hospitals were overwhelmed. Family members could not conduct the last rites of their loved ones. Such grim situations could be avoided in the future if people remain alert and prepared.

The United Nations General Assembly (UNGA) passed a resolution designating December 27 as the International Day of Epidemic Preparedness on December 7, 2020, during its 75th session and 36th plenary meeting. The decision is part of the 2030 Agenda for Sustainable Development. The declaration recognised the “devastating impacts of major infectious diseases and epidemics,” especially of the current COVID-19 pandemic, on people’s lives and the long-term damage to social and economic development. The UN General Assembly also noted how the present pandemic had overwhelmed the medical faculty and health systems globally, disrupted supply chains and disproportionately affected the livelihoods of people in poorer countries.

Dance to Decarbonize event: The Petroleum and Natural Gas ministry is planning a one-day event where renewable energy produced by dance will be utilized to charge electric automobiles as part of a novel effort. The “Dance to Decarbonize” event will take place on December 23 at the National Stadium next to India Gate in New Delhi as a prelude to the India Energy Week scheduled to take place in Bengaluru in February 2022.

The idea of kinetic dance floors has been around for a while. There are some gadgets with sustained outputs that are much higher than 35 watts. Simply jumping or dancing on the floor produces electricity. Stepping generates unconventional energy by converting pressure energy into mechanical energy, which is then converted into electrical energy.

A dynamo and a rack and pinion are both parts of the mechanism. The pinion transforms the pressure energy generated by the dancers on the floor into mechanical energy. In order to convert mechanical energy into electrical energy, a ratchet mechanism, speed-conversion gears, chains, and other parts are used.

Industry dignitaries, including Cabinet ministers, members of parliament, representatives from the Petroleum and Natural Gas Ministry, foreign diplomats, executives from manufacturers of electric vehicles, CEOs and senior executives of specific industries, representatives from airlines, oil Public Sector Undertaking associates in defense, and Border Road Organization, will attend the event, which is being billed as a step towards showcasing India’s goal of achieving net-zero emissions by 2070.

IIT Kanpur Develops Artificial Heart to Deal with Acute Cardiac Problems: IIT Kanpur is ready with an artificial heart that would be of great help to people with acute cardiac problems. Abhay Karandikar, the director of IIT Kanpur, announced that the animal testing would start the next year.

Now heart transplant will be easy. Artificial hearts can be implanted in serious patients. This artificial heart was created by cardiologists from across the nation and IIT Kanpur. Animal trials will begin in February or March. After success in the trial, transplantation can be done in humans in the next two years. Artificial heart is being developed to reduce the sufferings of the patients.

A team of 10 scientists and doctors has prepared this artificial heart. After the success of the trial on animals, heart transplantation in humans will begin within two years.

Covid-19 taught us some hard lessons. Before Covid, ventilators were not made in India. To save the lives of corona-infected, Indian scientists and doctors prepared ventilators in just 90 days. In India, two businesses produce ventilators. While foreign ventilators cost between Rs 10 and Rs 12 lakh, Indian ventilators only cost Rs 2.5 lakh to produce.

The School of Medical Research and Technology (SMRT) of IIT Kanpur has launched the Hridyantra, a challenge-based programme to develop advanced artificial heart also called Left Ventricular Assist device (LVAD) for patients with end-stage heart failure in January 2022. The programme has been launched in collaboration with nation’s leading hospitals and will be steered by a team of innovators with relevant experience selected under the mentorship of a task force comprising industry experts. The project was seed-funded by Padma awardee Sudha Murthy and the Indian Council of Medical Research (ICMR).

Anil Kumar Lahoti named as next railway board chairman and CEO

Railway Board: The Chairman of the Railway Board and Chief Executive Officer have been appointed as Anil Kumar Lahoti. The former General Manager of Central Railway was appointed as Member (Infrastructure) of the board a week ago, and will be taking over the chairmanship from Vinay Kumar Tripathi on January 1.

Over the next five years, these projects would transform the agriculture economy of J&K putting it on a new trajectory of growth with doubling the output of the sectors and making them sustainable and commercially viable.  Lt. Governor said, this will herald a new phase of farmer prosperity and rural livelihood security in J&K.

On the behalf of NHPC, Shri U.S. Sahi, Executive Director (EMS/CC/CSR) received the award. The event was held at the New Delhi Institute of Management, New Delhi on 22nd December 2022.

The 15th Enertia Awards 2022 was organized by the ENERTIA Foundation and supported by the Renewable Energy Promotion Association and the New Delhi Institute of Management.