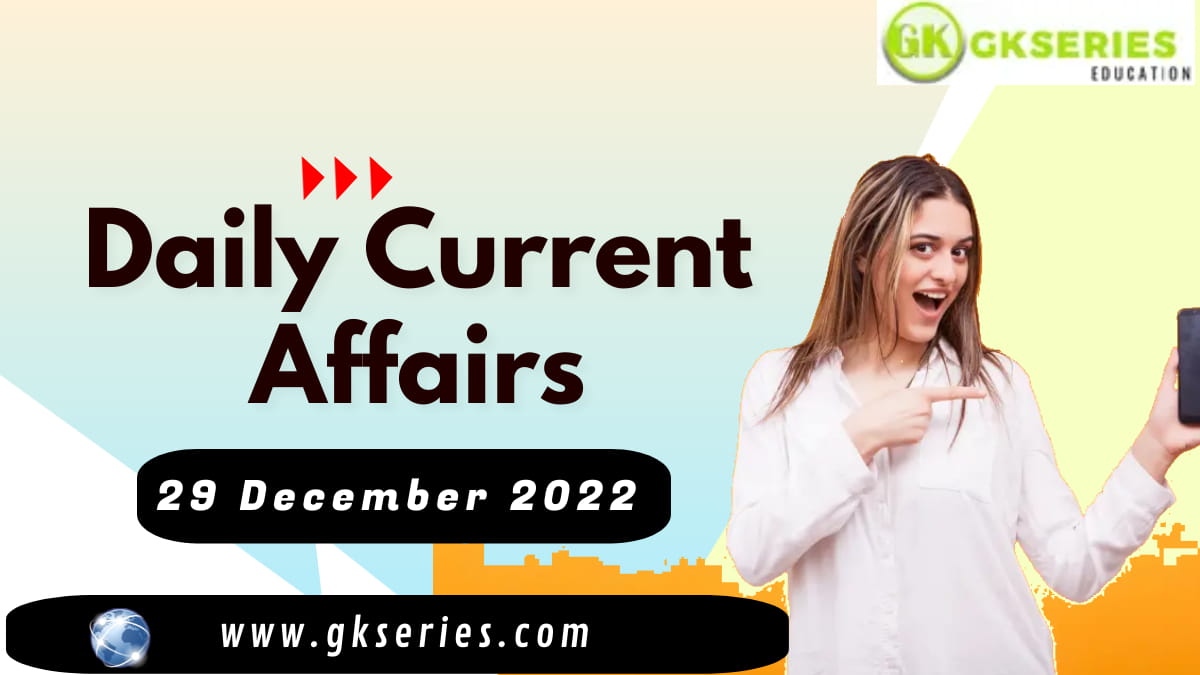 Current Affairs is the most important area in all competitive exams. But the difficulty level is very high. That’s why; many aspirants get confused, how to select Current Affairs for Preparation of Competitive Examination? In this Post, Daily Current Affairs 29 December 2022, we have tried to cover each and every point and also included all important facts from National/ International news that are useful for upcoming competitive examinations such as UPSC, SSC, Railway, State Govt. etc.

Lt Gen Walia has previously commanded an independent squadron in the desert sector, a regiment in Jammu and Kashmir and an Engineer Brigade along the western front. He has also commanded the MEG & Centre in Bengaluru. Additionally, he taught at the National Defence College in Delhi as well as the College of Defence Management in Secunderabad. The renowned officer has also held prestigious staff appointments including as Brigade Major of a Mountain Brigade, Director in Engineer-in-Chief’s Branch at the Integrated Headquarters of MoD (Army), Brig Q in a Strike Corps and Chief Engineer of a Command.

E-sports gets recognition from the Indian government: Esports received a huge boost from the Indian government. It is incorporated into the nation’s mainstream sports disciplines. In accordance with the authority “conferred by clause (3) of article 77 of the Constitution,” Droupadi Murmu, the President of India, amended the rules governing eSports and asked the Ministries of Electronics and Information Technology and Sports to “include e-Sports as part of multi-sports events.”

E-sports gets recognition from the Indian government: Key Points:

● E-sports after being added to the 2018 Asian Games in Jakarta as a demonstration sport, which meant that medals earned in the sport were not included in the official total of medals.

● There had been an increase in desire for Esports to be included in the curriculum of multi-discipline competitions.

● The Indian government has officially recognised “E-Sports” (Electronic Sports) as a part of multi-sport contests, which is a significant development.

● The Department of Sports under the Ministry of Youth Affairs and Sports will be responsible for esports.

Why E-sports is important?

● The Indian Esports Industry has fought to separate Esports from the broader category of “Gaming.”

● According to the industry, Esports (Electronic sports) are a type of competitive sport in which players compete in particular video game genres using their physical and mental prowess in a virtual, electronic setting.

E-sports: What will change post getting recognition from the Indian Government?

The combined efforts of the whole gaming community and the Ministry of Youth Affairs and Sports have finally paid off, we can say that Esports is a recognised sport in India. This ground-breaking choice will not only change the nation’s gaming environment in terms of better funding, exposure, and education about the industry, but it will also establish India as a major player in the world of Esports.

The country’s Esports golden age will surely begin in 2023, and with the Asian Games and the Olympic Esports Week both scheduled to take place soon, there is a lot of success anticipated for the entire industry.

Baskar Babu Re-Appointed as Suryoday Bank’s Chief for 3 Years: Baskar Babu Ramachandran has been reappointed by the Reserve Bank of India (RBI) as the MD and CEO of Suryoday Small Finance bank for a period of three years beginning on January 23, 2023. The founder of the bank, Baskar Babu Ramachandran sold the bank’s 50 lakh shares on 16th December for ₹55.44 crores to close a loan for exercising warrants to maintain the promoter’s stake at the minimum of 26 percent for the first 5 years.

A scheduled commercial bank is Suryoday Small Finance Bank. Through its 565 banking branches, the bank is widely present throughout 13 Indian states and UTs. The bank has reported a net profit of Rs 13 crore in Q2 FY22 as against a net loss of Rs 1.92 crore.

Atal Bihari Vajpayee: The Bharatiya Janata Party (BJP) chapter in Aurangabad named a star after the recipient of the “Bharat Ratna” on Atal Bihari Vajpayee’s birthday, which was observed as “Good Governance Day” across the nation. The distance of the star from Earth is 392.01 light years. It is the closest star to the Sun. The star with the coordinates 14 05 25.3 -60 28 51.9 has been registered in the International Space Registry on December 25, 2022. The star gets the name Atal Bihari Vajpayee ji. Registration Number CX16408US.

About the Atal Bihari Vajpayee:

On August 16, 2018, he passed away at the AIIMS hospital in Delhi. After coming to power in 2014, Prime Minister Narendra Modi, as a mark of tribute to the former Prime Minister, declared that December 25 would be celebrated as ‘Good Governance Day’ every year.

Wharton-QS Reimagine Education Awards: The Indian Institute of Technology, Madras received major accolades from the Wharton-QS Reimagine Education Awards, better known as “.” (IIT-M). The best programme awards went to the IIT Madras courses, BS Data Science and NPTEL in partnership with IISc Bangalore. The institute has been awarded and its BS in Data Science and Applications is awarded the silver in the best online programme category. While IIT Madras’ National Programme on Technology Enhanced Learning (NPTEL), a collaborative project of the IITs and IISc, took home the gold in the category for lifelong learning.

The Bachelor of Science in Data Science and Applications program is a sought-after undergraduate degree that is uniquely designed to address the employability of students in this domain. The programme opens the door to the world of data science and programming where the demand for skilled resources is very high, to anyone from any background and of any age group. This tailor-made programme provides core employment-oriented skills to students.”

Due to its hybrid teaching and learning approach and ranking as the best online degree programme, the Data Science programme received an award. Students were given the opportunity for professional and personal growth through the NPTEL programme, including the opportunity to up- and re-skill.

The Data Science and Applications programme at IIT Madras has more than 15,000 students enrolled in it at various levels. More than two crore students have enrolled in the NPTEL program’s more than 4,000 certification-related courses, and more than 23 lakh have registered for examinations. The Wharton-QS Reimagine Education Awards recognize outstanding achievements of educators, institutions, and organizations that drive innovation and excellence in education.

Significance of This Trade Agreement:

Indian Firm Bags Consultancy Contract for Bangladesh Port: An Indian company has won a contract to provide consulting services for a project to enhance capacity at Mongla port, Bangladesh’s second-largest seaport, which will improve sub-regional connections in South Asia. The contract was signed between Mongla Port Authority and EGIS India Consulting Engineers Pvt Ltd. The Government of India’s concessional Line of Credit covers a total project cost of USD 530 million, of which a PMC contract of USD 9.60 million was granted to EGIS India Consulting Engineers Ltd.

While India will provide the majority finance for the project under its concessional line of credit of $4.5 billion to Bangladesh, the Sheikh Hasina government will provide the rest. It is anticipated that the project will be finished by July 30, 2024. The project includes constructing a container terminal, handling and delivery yards, a residential complex and community facilities, marine workshop and service jetty.

Once upgraded, the Mongla port will serve the business interests of eastern India, north-eastern states and Southeast Asian countries.

Pranay Verma, the High Commissioner of India to Bangladesh, emphasized that in terms of dollar value and the volume of projects, Bangladesh is India’s greatest development partner.  Nearly one-fourth of India’s development assistance abroad is extended to various projects across sectors in Bangladesh. The upgradation of Mongla port will strengthen maritime connectivity for Bangladesh, not just for the movement of goods with India but also with Bhutan and Nepal.

A book titled “Forks in the Road: My Days at RBI and Beyond” by C. Rangarajan

C Rangarajan authored a book titled “Forks in the Road: My Days at RBI and Beyond”. It was published by the Penguin Business (Penguin Group). The book is the memoir of Dr C. Rangarajan, an Indian economist, a former Member of Parliament, and the 19th Governor of the Reserve Bank of India (RBI). It discusses India’s transition from its post-independence planning era to the present times. There are three sections to the book. Parts 1 and 2 are titled “RBI and the Planning Commission,” while Part 3 is titled “Beyond RBI.”

Essence of the book:

Rangarajan describes the key events between 1982 and 2014, particularly in the areas of money and finance, explaining not only what happened but also the motivations and processes behind them. As a public figure and an architect of economic change in India, he also ruminates about his interactions with both political and economic actors. Forks in the Road is not only a memoir of a man who shaped India’s economy and positively impacted the lives of many, but also a fascinating account of India’s growth story. It is a description of what we did and what we did not, and where we succeeded and where we failed.

IIT Guwahati, Bombay, European join hands to check Indian water quality: IIT Guwahati and Bombay have joined hands with European universities to develop a technology to check the quality of potable and other water in India.

The LOTUS Indo-European project is an initiative of the Dept of Science and Technology and the European Commission.

Aim: To provide solutions for issues related to the quality of water supplied across Indian households.

The LOTUS project is built around a novel water quality sensor developed at Ecole Polytechnique in Paris. The LOTUS Indo-European project, an initiative of the Department of Science and Technology and the European Commission, is aimed at providing solutions for issues related to the quality of water supplied across Indian households and elsewhere.  The sensor was further developed during the project by researchers at Université Gustave Eiffel in collaboration with IIT Guwahati and the SME EGM, Sophia Antipolis, France. According to S Senthilmurugan, Chairperson, Technology Incubation Centre, IIT Guwahati, LOTUS water quality sensor requirements were established after collecting information from Indian water utility owners, operators, end users, and research and development experts and therefore LOTUS sensor is expected to satisfy Indian water industries.

“The overall framework including the LOTUS sensor, and the quality monitoring and control algorithms developed at IIT Bombay, would be developed and deployed on platforms to provide improved solutions to address major water quality control issues across the country,” said Ravindra Gudi, Dean (Alumni and Corporate Relations), IIT Bombay.

High Powered Steering Committee on Cyber Security (HPSC-CS) was expanded to eight members from six earlier. It will continue to be chaired by Navin Kumar Singh (DG at NCIIPC). SEBI has also expanded its panel on Information Systems Security Committee (ISSC) to seven members, chaired by Prof Krishnamurthy.

It is important to note that the committee had only four members earlier, an update with the Securities and Exchange Board of India (Sebi) showed. The other members of the panel include Sanjay Bahl Director General at Indian Computer Emergency Response Team (CERT-In) and H Krishnamurthy, who was a chief research scientist at IISC Bangalore. Sandeep Shukla and Debdeep Mukhopadhyay, who are professors at the Department of Computer Science and Engineering in IIT Kanpur and IIT Kharagpur, respectively, and Sugata Gangopadhyay, head of the department of Computer Science and Engineering at IIT Roorkee, are the other members of the committee, the report said.