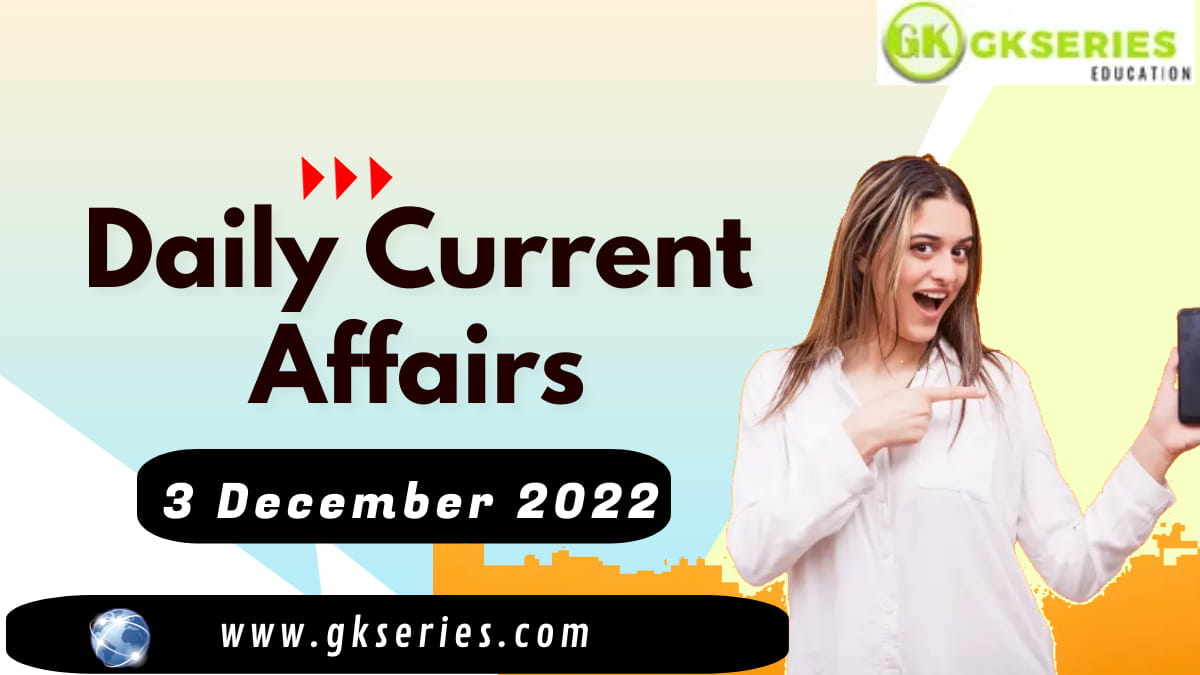 Current Affairs is the most important area in all competitive exams. But the difficulty level is very high. That’s why; many aspirants get confused, how to select Current Affairs for Preparation of Competitive Examination? In this Post, Daily Current Affairs 3 December 2022, we have tried to cover each and every point and also included all important facts from National/ International news that are useful for upcoming competitive examinations such as UPSC, SSC, Railway, State Govt. etc.

The United Nations General Assembly (UNGA) declared 1981 the International Year of Disabled People in 1976. (IYDP). US President Ronald Reagan performed the same thing on February 6, 1981. Then the UNGA declared 1983-1992 as the decade of Disabled Persons. The adoption of December 3 as the International Day of Persons with Disabilities happened during the UNGA’s 37th plenary meeting, on October 4, 1992.

Disability is a complex and multifaceted concept. Its meaning differs across the territories along numerous associated legal political and social constructsPhysical challenges, acid attacks, and dwarfism are easy to identify, but mental illness, specific learning disabilities, hearing impairments, and autism are more difficult and complex to identify without appropriate training. Hence disability is more complex where we lack the symptoms or have minimum visual manifestations that can easily be identified by the parents, teachers and the general society. Disability, in simple terms, is a physical or mental condition or both that limits individuals movement, activities or sense of perception.

Vijay Hazare Trophy Final: The Vijay Hazare Trophy was won by Saurashtra over Maharashtra in the final at the Narendra Modi Stadium in Ahmedabad, Gujarat.They restricted Maharashtra at 248/9 in 50 overs as captain Ruturaj Gaikwad hit a century, scoring 108 off 131 balls after a slow start. Chirag Jani of Saurashtra claimed a hat-trick in the match. Sheldon Jackson is the man of the moment.

Chasing the target of 249, Saurashtra started off cautiously before the openers sitiched a 125-run partnership. Batter Shledon Jackson held one end as wickets tumbled around him. He hit a match-winning 133 off 136 balls to enable Saurashtra reach the goal with five wickets to spare in 46.3 overs. Saurashtra’s second title victory in history.

Notably: The win enhanced Jaydev Unadkat’s credentials as captain, he had led Saurashtra to their first Ranji Trophy title in 2019-2020. He also finished at the top of the wicket-taking charts in the Vijay Hazare Trophy with 19 strikes to his name.

A book on Chipko Movement by Shekhar Pathak bags Kamaladevi Chattopadhyay NIF Prize 2022: Shekhar Pathak’s book on the popular forest conservation campaign Chipko Movement was chosen the winner of the Kamaladevi Chattopadhyay NIF Book Prize 2022. Translated from Hindi by Manisha Chaudhry, “The Chipko Movement: A People’s History” was selected from a diverse shortlist of five books covering a wide expanse of modern Indian history and encompassing distinct topics and perspectives.

The other shortlisted books were “Accidental Feminism: Gender Parity and Selective Mobility Among India’s Professional Elite” by Swethaa S Ballakrishnen; “Whole Numbers and Half Truths: What Data Can and Cannot Tell Us About Modern India” by Rukmini S; “Midnight’s Borders: A People’s History of Modern India” by Suchitra Vijayan; and “Born a Muslim: Some Truths about Islam in India” by Ghazala Wahab.

The Kamaladevi Chattopadhyay NIF Book Prize recognizes and honours excellence in nonfiction writing on modern or contemporary India by authors of all nationalities. It carries a cash award of Rs 15 lakh, a trophy and a citation. Established in 2018, the Kamaladevi NIF Book Prize builds on the New India Foundation’s mission of sponsoring high-quality research and writing on all aspects of Independent India. The Book Prize celebrates high-quality, non-fiction literature by emerging writers from all nationalities, published in the previous calendar year.

The award is named after Kamaladevi Chattopadhyay, an institution-builder who made substantial contributions to the independence struggle, the women’s movement, refugee rehabilitation, and the revival of handicrafts. Previous winners of the prize are Milan Vaishnav (2018), Ornit Shani (2019), Amit Ahuja and Jairam Ramesh (jointly, 2020), and Dinyar Patel (2021).

A biography of English poet John Donne wins UK nonfiction book prize: At a ceremony in London, British writer Katherine Rundell’s book “Super-Infinite: The Transformations of John Donne” was chosen the winner of the 50,000 pound ($59,000) Baillie Gifford Prize. Rundell’s book was chosen unanimously by the six judges from among 362 submissions. The book argues that Donne, best known four centuries after his death for a poem that begins “No man is an island” – is “a writer perhaps as great as Shakespeare, and a writer we should all read for his writing on love, sex and death.”

Notably: Last year’s winner was Patrick Radden Keefe’s “Empire of Pain: The Secret History of the Sackler Dynasty,” an expose of the family responsible for the opioid epidemic in the United States.

About the Baillie Gifford Prize:

The Baillie Gifford Prize recognizes English-language books from any country in current affairs, history, politics, science, sport, travel, biography, autobiography and the arts. The other finalists were Caroline Elkins’ “Legacy of Violence: A History of the British Empire;” Sally Hayden’s “My Fourth Time, We Drowned: Seeking Refuge on the World’s Deadliest Migration Route;” Jonathan Freedland’s “The Escape Artist: The Man Who Broke Out of Auschwitz to Warn the World;” Anna Keay’s “The Restless Republic: Britain Without a Crown;” and Polly Morland’s “A Fortunate Woman: A Country Doctor’s Story.”

NADA India has previously created extensive anti-doping education and awareness modules in Universal Design of Learning (UDL) for athletes with disabilities. UDL is a multi-modal framework to improve and optimize teaching and learning for all persons using sign language visual representation, transcribed subtitles and content audio. Some materials, which were previously exclusively available in print, are now available in Braille and audio forms as well. Furthermore, NADA India has held sensitization training for Dope Control Officers (DCO) who collect samples from athletes with disabilities, as well as upgraded the DCO kit for these athletes.

First-ever Tribal Winter Festival held in Bandipora, J&K: A first of its kind, Tribal Winter Festival was organised in Bandipora district of Jammu and Kashmir. This festival was organised by the district administration in collaboration with various departments at Ketson, the festival witnessed huge public participation, he said.

People from Gujjars and Bakerwals (Kashmiri community) have danced together to the beats of dhol (drum). Deputy Commissioner Bandipora Owais Ahmed said the festival highlighted the customs and traditions of tribals and also assured the development of sports infrastructure in the area to engage the local youth.

Addressing the gathering, the deputy commissioner said tribal areas have the potential to attract tourists and boost employment opportunities. He also highlighted the role of various government sponsored, public-oriented schemes for the economic upliftment of people.

Additional Deputy Commissioner Bandipora Waseem Raja called for public cooperation for promoting tourism in the area. He also urged the public to come forward to register for homestays. The festival witnessed music, dance, and cultural events that left the people enthralled, the spokesperson said.

This event has highlighted the customs and traditions of tribals.

The MoU was signed at the Make in Odisha Conclave 2022 where a Business Leadership Talk was organised by Finance Department on Emerging Solutions for Financing Industries and Infrastructure.

The session dealt with two sub-themes, one focusing on financing MSME and the other on infrastructure.  During the session, a few initiatives were announced including, the launch of electronic Bank guarantees in collaboration with National EGovernance Services Ltd.

This hackathon was organized by the Kerala Startup Mission (KSUM) in collaboration with EY Global Delivery Services, UNDP, Startup India, Global Shapers Kochi, NASSCOM and TiE Kerala. The winners has received a prize money of Rs 5 lakh. Climathon-2022 has focussed on climate change with the theme of securing a sustainable and climate-resilient future. The hackathon which was held in four phases received 174 ideations across India for 16 problem statements under seven Sustainable Development Goals.

Under this, new products ‘Fanta Apple Delite’ and ‘Charged by Thums Up’ will be made available for sampling at some of India’s top airports.

Adani Digital Labs allows brands to interact with large numbers of travellers and target customers with high spending and purchasing power. The platform is currently live at the seven key airports located in Mumbai, Ahmedabad, Jaipur, Lucknow, Guwahati, Mangalore, and Thiruvananthapuram & Adani CNG Stations, and will soon be available in many other categories of locations.

Sylhet Festival inaugurated by Ministers of India and Bangladesh

The event was attended by Himanta Biswa Sarma (Assam CM), K Hari Babu (Mizoram Governor). State Chief Minister Himanta Biswa Sarma, Mizoram Governor K Hari Babu and Assam Industries & Commerce and Public Enterprises and Cultural Affairs Minister Bimal Bora are also expected to be attending the 5-day festival which is being jointly organised by the Ministry of Culture and India Foundation. Around 100 dignitaries from Bangladesh will also join the programme. It is being organised in the context of the historical relationship between Sylhet and Barak Valley of South Assam.

India to assume chairmanship of Wassenaar Arrangement on 1st January, 2023

At the 26th annual plenary of the Wassenaar Arrangement held in Vienna from Nov 30- Dec 1, 2022, Eoin O’Leary (Ireland’s ambassador) has handed over the chairmanship to Jaideep Mazumdar (India’s ambassador).

Jaideep Mazumdar is the permanent representative to the UN and international organisations in Vienna. India joined the Wassenaar Arrangement in December 2017 as its 42nd participating state. The body is a multilateral export control regime that works to promote transparency and greater responsibility in transfers of conventional arms and dual-use goods and technologies through regular exchanges of information among its members. The regime is aimed at tracking such transfers and preventing “destabilising accumulations” of conventional arms and dual-use goods, the external affairs ministry said.