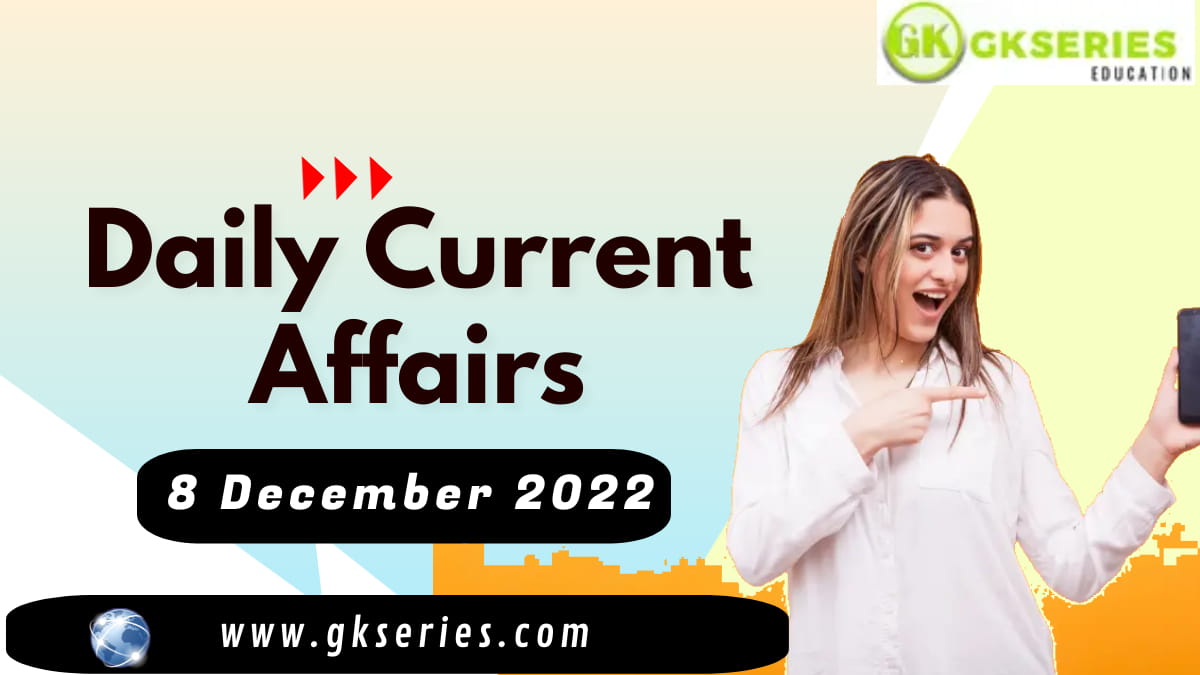 Current Affairs is the most important area in all competitive exams. But the difficulty level is very high. That’s why; many aspirants get confused, how to select Current Affairs for Preparation of Competitive Examination? In this Post, Daily Current Affairs 8 December 2022, we have tried to cover each and every point and also included all important facts from National/ International news that are useful for upcoming competitive examinations such as UPSC, SSC, Railway, State Govt. etc.

RBI Monetary Policy 2022: The Monetary Policy Committee (MPC), which consists of six members and is led by Reserve Bank of India (RBI) Governor Shaktikanta Das, has announced its decision.  In the consecutive fifth hike this year, the RBI’s Monetary Policy Committee has raised the repo rate by 35 basis points (bps) to 6.25 per cent with immediate effect, making loans expensive. Since August 2018, the policy rate has now reached its highest level. The RBI has maintained policy stance at ‘withdrawal of accommodation’.

Notably: The next meeting of the MPC is scheduled during February 6-8, 2023.

RBI Repo Rate: Consequently, the various rates are as under

An empowered six-member monetary policy committee (MPC) must be established by the Central Government by publication in the Official Gazette, according to Section 45ZB of the amended RBI Act, 1934. The first such MPC was constituted on September 29, 2016. The present MPC members, as notified by the Central Government in the Official Gazette of October 5, 2020, are as under:

SAARC Charter Day 2022: Every year on December 8, South Asian Association for Regional Cooperation (SAARC) Charter Day is observed. On this day in 1985, SAARC Charter was adopted in Dhaka, during the first summit of the group. The regional organisation celebrates its 38th anniversary this year. At the first SAARC Summit held in Dhaka, Bangladesh, the heads of state or government of Bangladesh, Bhutan, India, Maldives, Nepal, Pakistan, and Sri Lanka signed the charter.

The prime focus of SAARC is to work collectively to promote the welfare of people in the region and to improve their standard of living through social progress and economic development. The aim of SAARC members is to promote stability, peace and progress in the region. SAARC has organised 18 summits since 1985. These specialised bodies promote regional cooperation by SAARC members in various fields.

History and significance of the SAARC Charter:

On 8 December 1985, the SAARC Charter was adopted, in Dhaka, during the first summit of the group. The heads of eight South Asian countries—Bangladesh, Bhutan, Afghanistan, Maldives, Nepal, India, Pakistan, and Sri Lanka—signed the Charter. As mentioned in its charter, the prime focus of SAARC is to work collectively to promote the welfare of people in the region and to improve their standard of living through social progress and economic development.

Nadoja Award 2022: Author Krishnappa G., social activist S. Shadakshari, and physician and head of the Sri Jayadeva Institute of Cardiovascular Sciences and Research C.N. Manjunath have all been chosen to receive the Nadoja Award from Kannada University in Hampi. The dignitaries will be honoured with the award by Governor Thawarchand Gehlot, who is the Chancellor of the university.

About Dr. Manjunath, Shadakshari and Krishnappa:

Dr. Manjunath, who hails from Cholenahalli in Channarayapatna taluk of Hassan district, is a well-known cardiologist and helms the State-run Jayadeva Cardiology Institute, one of the premier cardiology institutes in the country.

The social services provided by Mr. Shadakshari, who hails from Talavur in the Chintamani taluk of the Chikkaballapur district, are well-known. His Ramanashree Prathisthan, in association with Akhila Bharata Sharana Sahitya Parishat, has been identifying scholars and writers who have made significant contributions to the cultural heritage of the State and honouring them with Ramanashree Awards for the last 16 years. Mr. Shadakshari is also the chairman of Ramanashree Hotel and Group of Institutions.

Mr. Krishnappa, often known as Bendre Krishnappa, hails from the nearby Bengaluru town of Cholanayakanahalli. He was chosen to receive the prize for his contribution to the literary world.

Mirabai lifted a combined weight of 200 kg compared to Zhihua’s total of 198 kg. This was Mirabai’s second medal at the World Championships, having previously won gold in 2017 with a lift of 194 kg. In clean and jerk, Mirabai Chanu, competing in her first international meet since winning the Commonwealth Games 2022 in August, once again struggled with her left wrist. The Indian weightlifter’s first attempt ended in failure, but she was able to lift 111 kg on her second try and match Jiang Huihua’s 113 kg on her third try to place in the top three.

“Extremely humbled and grateful for this victory. Small step towards our eventual goal of an Olympic gold,” said Mirabai Chanu after winning the silver medal.

She added: “Gratitude to my coach Vijay sir, our president IWLF Sahdev Yadav sir, sports authority of India, all the stakeholders and well wishers.”

About Her Previous Accomplishment:

Mirabai from Manipur had previously won gold in the 2017 world weightlifting championship. She had won the gold medal at the 2022 edition of commonwealth games.

What More The Data Says:

About The Power Generation:

Raosaheb Danve Patil, the Union Minister of State for Coal, stated that India intends to boost its yearly coal production to 1.5 billion tonnes by 2030 in order to fulfil its rising fuel demand. “Our total dispatch in 2013-14 was 572 million tons, last year it was 817 million tonnes, this year it will be 900 million tonnes. Despite this, domestic production will not be able to fulfil full coal demand,” the minister said.

As the country is aiming to become self-reliant in the coal sector, deliberations are in progress on how the country can perform sustainable coal mining, said the Coal Minister.

Former Union minister and noted economist Yoginder Alagh passes away: Former Union minister and renowned economist Prof. Yoginder K. Alagh has passed away. He retired from the Sardar Patel Institute of Economic and Social Research in Ahmedabad. Born in Chakwal, in present-day Pakistan, in 1939, Alagh studied at the University of Rajasthan and later got a doctorate in economics from the University of Pennsylvania, USA.

About the Prof Yoginder K Alagh:

Google Launches Anti-Misinformation Campaign in India: Google’s Jigsaw subsidiary is launching a new anti-misinformation project in India, aimed at preventing misleading information that has been blamed for inciting violence.

The campaign will make use of “prebunking” videos shared on the company’s YouTube channel and other social media platforms, which are intended to refute erroneous claims before they gain traction. Google’s efforts to challenge the spread of misinformation mark a contrast with rival Twitter which is cutting its trust and safety teams, despite new owner Elon Musk saying it will not become a “free-for-all hellscape”.

Google recently conducted an experiment in Europe where it sought to counter anti-refugee narratives online in the wake of the Russian invasion of Ukraine.

The experiment in India will be bigger in scope as it will deal with multiple local languages — Bengali, Hindi and Marathi — and cover diverse sections of a country populated by over a billion people.

“This presented an opportunity to research prebunking in a non-western, global south market,” said Beth Goldman, Jigsaw’s head of research and development.

Officials from the Indian government have urged tech giants like Google, Meta, and Twitter to do more to stop the spread of false information. The Ministry of Information and Broadcasting (I&B) has repeatedly invoked “extraordinary powers” to block YouTube channels, and some Twitter and Facebook accounts, allegedly used to spread harmful misinformation.

Inflammatory messages have also spread via Meta’s messaging service Whatsapp, which has more than 200 million users in India. In 2018, the company curbed the number of times a message could be forwarded, after false claims about child abductors led to mass beatings of more than a dozen people, some of whom died.

Spice Money partners with Axis Bank for financial inclusion in rural India : Spice Money has partnered with Axis Bank to facilitate opening of instant, zero balance savings or current accounts for rural citizens through its Adhikari network. Through this association, Spice Money aims to bridge the rural-urban divide and bring financial inclusivity by providing access to banking products to the last mile at their doorstep, thereby financially empowering thousands of rural citizens living in the hinterlands of India, founder of the fintech firm Dilip Modi said.

Aim: To bridge the rural-urban divide and bring financial inclusivity by providing access to banking products to the last mile at their doorstep

A regulated entity under RBI, the fintech firm delivers various financial services such as cash deposit and withdrawal, and insurance premium to the rural masses.

Melbourne-based, the Head of Technology and STEAM project leader at ViewBank College, Veena Nair, has received recognition for her work in showcasing students how to apply STEAM in real-world settings and how their abilities can have a positive impact on society.

She is ViewBank College’s Head of Technology and STEAM project leader. She was awarded for demonstrating practical application of STEAM to students, and how they can use their skills to make a real impact in the world. She started her teaching career in Mumbai, where she provided computers to low socio-economic schools.

According to a notification, issued by the Ministry of Law and Justice, President of India has appointed Justice Rabstan to perform duties of the office of the Chief Justice of Jammu and Kashmir and Ladakh.
He has replaced incumbent Chief Justice Ali Mohd Magrey, who retired on 7th December 2022. Justice Rabstan had enrolled as an Advocate on 6th March 1990 in Bar Council of J&K. He remained as Standing Counsel for Ladakh Autonomous Hill Development Council, Leh from 1997 till 2005.