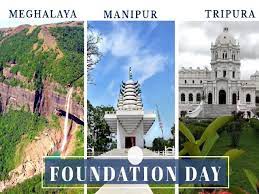 Foundation Day of Manipur, Meghalaya and Tripura: The foundation day of the three northeastern states Tripura, Manipur and Meghalaya is being celebrated on 21st January.

Merger of Manipur with India:

Manipur was made a Union Territory in 1956.

Merger of Tripura with India:

Tripura was a princely state until its merger with the Indian Union on 15 November 1949.

After the death of Bir Bikram Singh, the last Maharaja of Tripura on 17 May 1947, Maharani Kanchan Prabha (wife of Maharaja Bir Bikram) represented the state of Tripura and merged it with India.

Merger of Meghalaya with India:

The rulers of the Garo and Khasi regions acceded to the Indian Union in the year 1947.

Meghalaya was created as an autonomous state within Assam under the Assam Reorganisation (Meghalaya) Act, 1969.